Peabody Coal’s stock is already up 500% this week. Keith Schaefer explains why this is a story and a stock he loves.

By Keith Schaefer
Peabody Coal (NYSE:BTUUQ) is a CRAZY, HIGH-RISK trade.  This stock was up 600% this week at one point on Friday.  But it could literally be worth almost zero on Wednesday morning, after they report their quarterly.
But it could also be on the way to $43, as I’ll explain.
Peabody Coal’s stock is already up 500% this week.  The reasons: 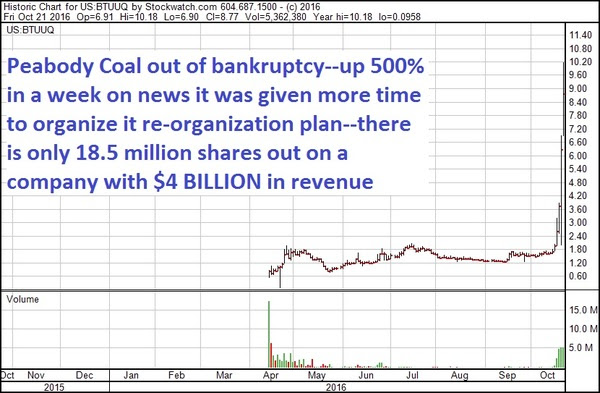 And here is a chart of Australian thermal coal prices: 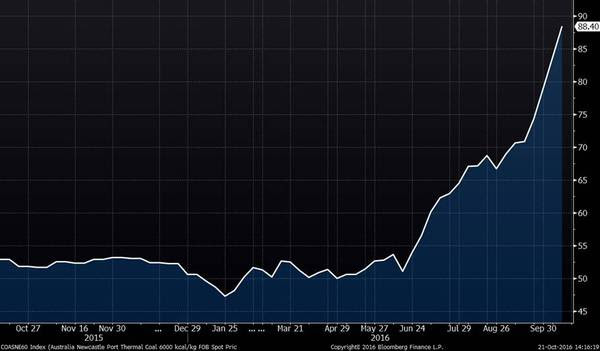 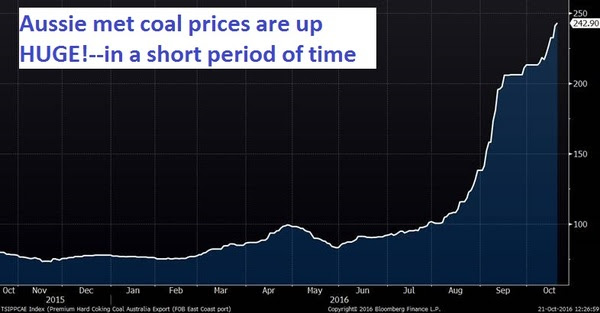 On the surface, this is a story and a stock I would love—it has just come out of bankruptcy, NOBODY follows it, and it only has 18.5 million shares out for a company that has $4 BILLION in revenue.  That creates incredible leverage for shareholders, as the stock chart attests—it’s up 500% in one week!
And on the surface, investors could argue (and obviously are, given the share price move) that the stock is worth $43.  Skimming some quick data points shows me $482 million in debt against $1.274 million cash for a cash value of $792 million—which divided by 18.5 million shares = $42.81.   The stock is  trading for $10—a big gap that clearly some investors in the market believe should be closed.

Another way of saying that is that Peabody has a NEGATIVE Enterprise Value of some $618 million.
And certainly, the increased cash flow that COULD or SHOULD be coming from higher coal prices recently has investors warming up to this story stock quickly.
Peabody produces about 3.6 million tons of met coal in Australia and about 5.2 million in thermal coal.  They are easily picking up $100/ton in overall coal margins (between thermal and met) in the last quarter from Australia.

That’s $520 million in extra revenue, and most of that should go to EBITDA.  Met coal prices are also up, and could add another $200 million in EBITDA.  And keep in mind this increasing coal price is also lifting the Aussie dollar.
Powder River Basin coal is also up at least $2/t off the bottom a few months ago, so the 22 million tons Peabody produces there is generating an extra $44 million annualized. 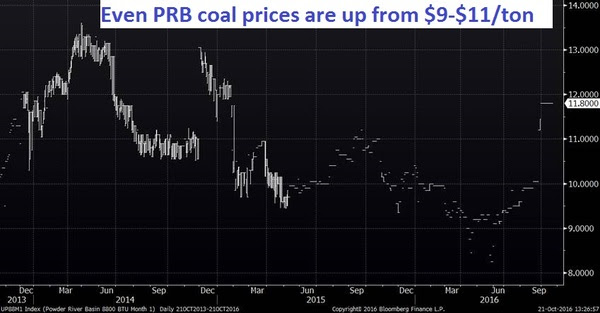 That all sounds great, eh?  But I don’t know what kind of negative EBITDA the company had before there.
AND…as it comes out of bankruptcy there is still a lot investors don’t know—like, how the arbitration on the $643 million pension liability will go in January 2017.
Though the bulls would argue that the increased cash generation in Australia could pay all that off…if coal prices stay up here.
I don’t know enough about coal to comment on that. In fact, I don’t know ANYTHING about coal.  I just know a good stock chart and some basic math…with one foot planted firmly in the air.
Before entering bankruptcy, Peabody had an UGLY chart…as most coal stocks did/do (are there any left?) 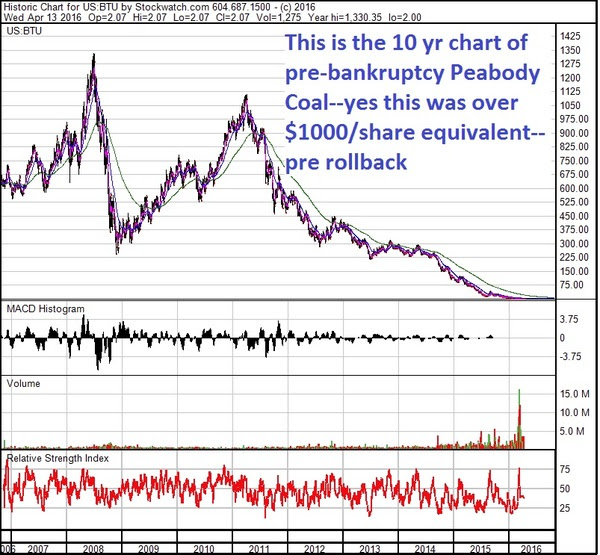 Peabody reports on Tuesday—there will likely be some more clarity on the state of the company then.  That kind of makes this a binary trade very quickly.
But it sure is interesting.
DISCLOSURE–I put a small amount of fun money into this and may trade it out Monday.

This article was originally posted on Oil and Gas Investments Bulletin on October 23, 2016.

Copyright © 2011
This feed is for personal, non-commercial use only.
The use of this feed on other websites breaches copyright unless you have written permission from Keith Schaefer of Oil and Gas bulletin to republish. If this content is not in your news reader, it makes the page you are viewing an infringement of the copyright. (Digital Fingerprint:
3r5723475234957asdgvaisduthadsfg)

What Was the Highest Price for Gold?
Australia Resource Investing 101
Top Silver Countries by Reserves
Ways to Invest in Rare Earths