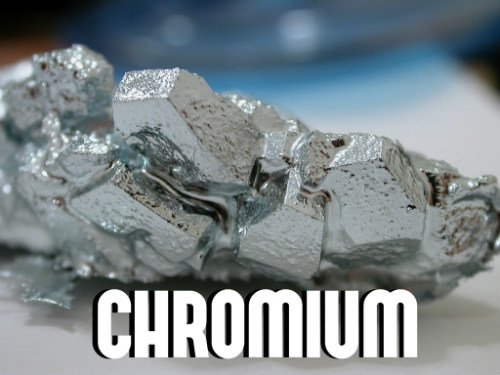 What countries achieved the greatest chromium production in 2017? South Africa took the lead by a long shot, and was followed by three other countries.

Chromium is a hard and brittle gray metal that resists tarnish and has a high melting point.

Those characteristics make it a key element in steel production. In fact, chromium producers sell about 60 percent of their output to the steel industry.

The steel industry consumes chromium somewhat indirectly in that steel production requires ferrochrome, an alloy of chromium and iron that contains 50 to 70 percent chromium by weight. Essentially, chromium is used to produce ferrochrome, which is then used to make steel.

China is the world’s top consumer of chromium, as well as the top stainless steel producer. However, it has no chromium production at all. It also has very few choices in where to get it — the US Geological Survey’s most recent report on chromium shows only four countries produced the metal in 2017.

South Africa is the largest ferrochrome and chromite ore producer, and most countries depend on it for those materials. However, the US Geological Survey notes that from October 2016 to July 2017, ferrochromium prices rose by a whopping 48 percent for charge grade, and 64 percent for high carbon.

Prices have been tamer since then, remaining flat from Q2 to Q3 in 2018, but companies may be incentivized to increase their chromium production in the years to come.

South Africa produced 15 million MT of chromium in 2017, beating out the rest of the world’s chromium producers by a wide margin. Its chromium production was slightly higher than it was in 2016.

Chromium production requires a lot of energy — that’s been a problem in South Africa before, as electrical power supply is sometimes constrained in the country. However, “the recent commissioning of new ferrochromium furnaces in South Africa and China has the potential to increase ferrochromium production by 630,000 tonnes per year,” according to the US Geological Survey.

Major droughts have impacted South Africa this year, and while “day zero” has been postponed, investors will have to see if there is an impact on 2018 output.

Last year, Kazakhstan produced 5.4 million MT of chromium, up only slightly from its 2016 output of 5.38 million MT. One major chromium operation in the country is the Vokshod mine and plant, owned by Yildirim Group. Its annual chromium production capacity currently stands at 1.3 million tons.

India’s chromium production came in at 3.2 million MT in 2017. Little information is available on the Indian chromium space. In a past mineral commodity summary for chromium, the US Geological Survey stated that chromium ferroalloys are produced at plants in Andhra Pradesh, Chhattisgarh, Gujarat, Odisha and West Bengal states.

Tata Steel has a ferroalloys and minerals division; Tata Tiscrome falls under that umbrella and has operations in Odisha, India.

Turkey maintained its chromium production in 2017, retaining its position as one of the world’s top chromium producers. It put out 2.8 million MT, the same amount it produced in 2016.

Yildirim Group is a major player in the Turkish chromium industry through Eti Krom, which it acquired in 2004. Eti Krom is the world’s biggest hard lumpy marketable chrome ore producer, and is the only chrome ore supplier in Turkey that can extract chromium throughout the entire year. Yildirim Group also states that Eti Krom is the only high-carbon ferrochrome producer in Turkey.

See our exclusive index of Chromium companies on the move
EXPLORE