Chromium was not discovered until the early 19th century in the United States, where it quickly found use in the textile industry as a dye. The metal is now commonly used in stainless steel. 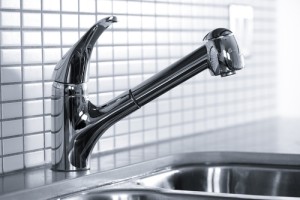 Chromium can be found in stainless steel appliances throughout the household.

Chromium was not discovered until the early 19th century in the United States, where it quickly found use in the textile industry as a dye. While it was initially used as a chemical agent for dying textiles, the element was also applied to automobiles. In fact, school buses have been painted “chrome yellow” since the 1930s.

However, it is the application of chromium in stainless steel that accounts for 60 percent of consumption of the metal. While manufacturers were aware that adding chromium to steel produces a stronger alloy, it wasn’t until the early 1900s that they noticed that steel containing 5 percent or more of chromium became corrosion resistant even at high temperatures, forming the first stainless steel. Today, the stamp “18-8″ can commonly be seen on cookware and silverware, and signifies that the stainless steel consists of 18 percent chromium and 8 percent nickel. Chromium provides the strength, while nickel gives the product its sheen.

Use in stainless steel

Stainless steel is ubiquitous in manufacturing today. The fact that the metal does not rust and can easily be sterilized makes it an ideal substance for many items most people use in their daily lives. It can be found on appliances throughout the home, specifically in kitchen sinks, food processing equipment and cutlery. It is also the metal of choice to manufacture medical and dental equipment. Famously, the Gateway Arch in St. Louis is covered with a stainless steel skin. Chromium also has applications in the manufacturing of certain chemicals, such as those used for tanning leather.

​Chromium is also an essential trace element that the human body needs in order to function properly, just like iron, calcium and zinc. It wasn’t until the 1950s that studies suggested that chromium could be important for the regulation of glucose in the bloodstream. An experiment conducted by Dartmouth College researcher Henry Schroeder demonstrated the importance of chromium to the diet after a series of animals had the mineral completely removed from their food. These animals soon developed diabetes-like glucose problems until chromium was introduced back into their diet. Though supplements of chromium are available to those with glucose regulation imbalances (the elderly or those with poor nutrition) most people will get their chromium supply through a well-balanced diet.

An acceptable substitute for the use of chromium in the manufacturing of stainless steel does not exist; however, the apparent abundance of the mineral in the Earth’s crust along with the fact that the metal is easily recyclable means that chromium supply is not threatened. Geologists estimate that there is as much as 11 billion tons of mineable chromium ore, most of which is found in Southern Africa — that is enough to supply the world’s chromium needs for hundreds of years to come.

Chromium and chromite are sometimes used interchangeably. Chromium’s mineral ore is called chromite, which is an oxide of iron, magnesium, aluminum and chromium. Chromite is found in two major deposit types: stradiform, found primarily in South Africa, and podiform, which is found in layered igneous sequences that developed in the Earth’s crust below the sea floor.