With Rio Tinto’s famous Argyle diamond mine preparing to close, INN looks at the impact diamond mine closures will have in the coming years.

In parts one and two of our diamond series we looked at the market and value of rare colored diamonds as well as some of the supply demand dynamics in that space; we also examined the lab-grown diamond sector and how they may impact the traditional diamond market.

In part three, we will look at how aging diamond mines nearing the end of their production life will impact the colored diamond segment and market as a whole.

As international mining giant Rio Tinto (ASX:RIO,LSE:RIO,NYSE:RIO) prepares to take its impressive 64 stone Quest for the Absolute colored diamond collection on the road in Hong Kong and New York, the moment is bittersweet.

That’s because this most recent collection, which includes six hero diamonds ranging in shades of fancy vivid pink to fancy red and purplish hues, may be the last diamond tender displayed while the Argyle mine is in production.

Famed around the world as one of the few places were volcanic pipe kimberlites reveal brightly hued vivid pink, red and brown diamonds, Western Australia’s Argyle mine has reached the end of its production life and is slated for closure in the next year. 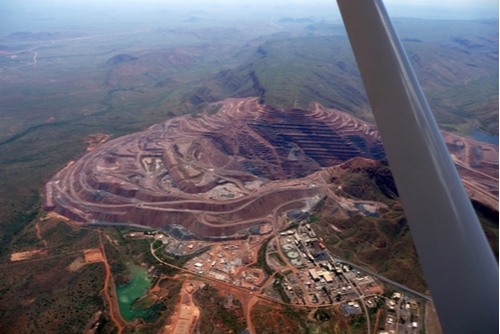 Aerial view of the massive Argyle diamond mine in Western Australia.

Having been in operation since 1983, Argyle has produced roughly 800 million carats of rough diamonds. The mine’s most coveted gems are the pink stones and red gems, as well as its brown and purple diamonds, which generate a large portion of the revenue stream for Argyle.

Annually, 11 million tonnes of ore is processed from the Argyle mine, producing roughly 8 million carats of diamonds.

Argyle isn’t the only high profile diamond mine slated for closure; however, it is the most prolific.

Diamond production is expected to drop by 99 percent in Australia when Argyle shuts its doors. Yearly output is estimated to drop from 14.2 million carats of rough diamonds to 137,000 carats.

While white diamonds are produced en masse at a number of mines around the world, the Argyle closure will disproportionately affect the pink diamond market, as the Australian mine produces 90 percent of global supply.

Diamond analyst Paul Zimnisky pointed out, “Argyle supplies the large majority of global fancy pink and red diamonds, so the closing of the mine will noticeably impact the supply of those gems. Argyle ‘pinks’ have become a unique good, which tend to be differentiated from other fancy pink diamonds.”

And the value may increase once the mine is officially shuttered.

“If demand remains steady for those goods, then the law of economics bodes well for prices given that new supply will be halted,” he added.

Production has already begun to decline at the massive mine. During Q2 2019, output was down 5 percent compared to the same quarter in 2018 and 9 percent lower for the half year  period.

Rio expects to recover between 15 to 17 million carats from Argyle this year. Part of that multimillion carat haul will include the 28.84 carat gem quality white diamond the company unearthed earlier this year.

The Argyle Octavia is the largest gem quality white diamond ever discovered at the Australian project.

“We are delighted with this discovery which is a testament to the extraordinary Argyle orebody that continues to deliver these miracles of nature, even as it nears the end of mine life,” Arnaud Soirat, chief executive of Rio Tinto’s Copper and Diamonds portfolio, said in a March press release.

Indeed, Octavia is spectacular in a variety of regards. It is one of the 0.00007 percent of the white diamonds weighing more than 20 carats ever recovered from Argyle.

With a unique octahedral shape, the rough, gem-quality diamond is a true testament to the beauty of nature, as is the Argyle Pink Jubilee, a 13 carat rough pink diamond discovered in 2012 that was subsequently cut down to 8.01 carats. The Jubilee is the largest pink diamond ever recovered in Australia and is on display at the Melbourne museum.

While the amount of Argyle pinks and reds available for purchase may drop, there may be a glimmer of hope for investors and collectors if the company has stockpiled some of the rare stones.

“Rio has not disclosed if there is excess Argyle rough currently being held as inventory; however, given recent market conditions it is likely that there is at least some inventory,” said Zimnisky.

Still, he did note that stockpiled stones will not compensate for the mine’s closure.

“That said, given the high volume of Argyle production, my guess is that any inventory held is nowhere significant enough to offset production lost when the mine is finally closed.”

Diamond industry major and the company that coined the phrase “a diamond is forever” DeBeers is also facing the impact mine closures have on a company’s bottom line.

In May, the company produced its last batch of diamonds from the Victor mine, located in northern Ontario.

At the first and only diamond mine in the Canadian province, 8.1 million carats of diamonds were recovered over the more than a decade it was in production.

“Not only was this Ontario’s first and only diamond mine, Victor is the foundation for our company’s success in Canada and continued to demonstrate that strong performance to the very end as the team managed to extend production almost four months longer than originally expected,” Kim Truter, De Beers Group Canada CEO, wrote in an announcement.

During its tenure Victor produced millions of carats worth of diamonds. Some of its largest include a 271 carat white diamond as well as a 35 carat diamond recovered in 2013.

While closing a mine may cease the extraction of minerals and resources, it by no means signals the end of work. Most jurisdictions have regulations in place overseeing the correct remediation of once-operational mining projects.

The guidelines may dictate the water quality levels that mining companies must target in regard to ground and surface water, as well as the mine needing to rehabilitate the area for local flora and fauna.

For the Victor mine, reclamation meant planting one million trees over six years, a milestone DeBeers reached on June 25, 2019.

Although production at Victor has come to an end, it is not the end of DeBeers’ diamond mining activity in Canada. The company currently has a joint venture project with Canadian miner Mountain Province Diamonds (TSX:MPVD) at the Gahcho Kue mine in the Northwest Territories.

Diamond mine closure: The future of the sector

With the closure of one mine comes an opportunity for another, and that is exactly what Russia’s largest diamond miner ALROSA (MCX:ALRS) is banking on.

“Indeed, Rio Tinto is planning to close one of the largest diamond mines, Argyle, in a few years, which will reduce the share of colored diamonds in the market and will increase the average price growth,” Evgeny Agureev, member of the management board and director of the United Sales Organization at ALROSA, told INN earlier this year.

Agureev remains confident that his company will be able to supply the market with the rare colored diamonds it seeks.

“ALROSA also has such assets, for example, Severalmaz in the Arkhangelsk region or Almazy Anabara in the north of Yakutia, where many pink diamonds are mined. We estimate that our share of colored diamonds production can be about 30 percent of the market. Given this scenario, we expect ALROSA to become one of the world’s leaders in the colored diamond trade.”

Whether ALROSA is able to replace the sheer volume of colored diamonds produced at Argyle remains to be seen, although there is no question that the closure of the Australian mine is going to drive the price of colored diamonds, especially pinks, through the roof.

Scarcity is one of the catalysts of diamond price growth. Add to that extreme rarity and it’s easy to understand that the price of pink colored diamonds is likely to hit highs never seen before.

Agureev pointed out another issue. “There is a trend on brightness and individuality,” he said. “So the exquisite beauty and rarity of colored diamonds is driving a surge in demand. The customers’ interest in rare blue, pink, green or purple tones is guided by a desire for scarcity and a passion for the exotic.”

Looking ahead, diamond major De Beers is ramping up its offshore diamond mining operations, an area the company believes is the future of the diamond mining sector. De Beers has invested US$468 million into its Debmarine Namibia outfit to recover diamonds from the seabed off the coast of Namibia.

The company’s marine mining page touts the new technology and the waters off the coast of Southwest Africa, as the new mining grounds for the diamond industry.

In 2015, 1 million carats of stones were mined from the area. De Beers believes that as much as 95 percent of future diamond production will come from beneath the water.

As diamond analyst and market watcher Paul Zimnisky notes, it’s a very interesting time for the diamond sector, one that will undoubtedly change the diamond industry as a whole.

“The global supply picture for natural diamonds is encouraging from the standpoint of diamond prices,” he said. “I am forecasting incremental annual supply decreases until at least 2021, with no new major supply catalyst until the middle-to-the-end of the next decade.”