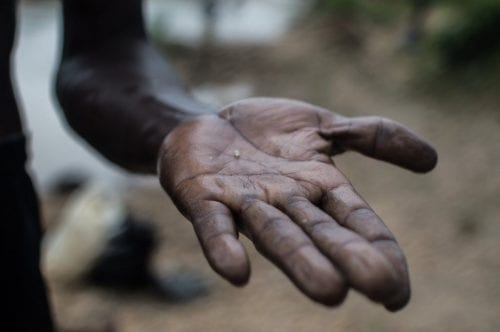 The Central African Republic was banned from exporting diamonds in 2013 after a coup overthrew the sitting government. Since then, the nation has struggled to overcome its status as a “blood diamond” producer and war-torn jurisdiction.

Fifteen years after the Kimberley diamond verification and vetting process was instituted in the country, and two years after a diamond export ban was partially lifted, the Central African Republic (CAR) is still grappling with bringing its precious stones to market.

CAR diamonds were banned in 2013, after a coup overthrew the sitting government. Since then, the nation has struggled to overcome its status as a “blood diamond” producer and war-torn jurisdiction. Especially since many of its citizens rely on artisanal mining to support their families.

“Diamonds are my life,” Abdoul Raouf, a middle man between the artisanal miners and the local markets told Bloomberg last year. “It’s because of diamonds that I can take care of my family.”

In 2016, the CAR diamond ban was partially lifted by the 81 participating nations of the Kimberley Process, and the Central African nation was allowed to sell gems recovered from five approved “green zones.” The almost half-dozen sites were to be monitored by the then newly elected government, which would then enforce the Kimberley Process to certify the diamonds were conflict free.

However, according to the CAR’s mines minister, Leopold Mboli Fatrane, the country needed help implementing and administering the process in a widespread way, and still does.

“It’s a country of conflict,” the minister told Reuters. “The situation has affected a lot of people, notably the mining sector, which is more than 20 percent of the population.”

Before the conflict-zone embargo, the CAR was the world’s 10th-largest producer of diamonds, with the vast majority of the stones being gem quality. Diamonds were the country’s biggest export, with annual production capacity estimated at 840,000 carats and sales peaking at US$62 million in 2012.

Artisanal miners and local economies aren’t the only ones affected by the embargo on CAR diamonds. The nation as a whole has been impacted due to reduced tax revenue from diamond sales.

Part of the discrepancy may be due to the announcement by leading diamond producer De Beers, owned by Anglo American (LSE:AAL), that it will be implementing blockchain to document the supply chain and enhance transparency.

The road ahead doesn’t look like it will get any easier for the CAR. Late last month, De Beers launched a fashion jewelry line featuring lab-grown diamonds, which are 100 percent conflict free and substantially cheaper than their naturally occurring counterparts.

The Kimberley Process itself has come under scrutiny for not being robust enough in its efforts to ensure stones are in fact conflict free. Most recently, NGOs Global Witness and IMPACT withdrew themselves from the pact, citing the collectives’ inability to better vet the gemstones.

Later this week, members of the Kimberley Process will meet in Antwerp to discuss the future of diamond production, and more than likely the CAR will be there advocating for the ability to bring more diamonds to market and more tax revenues to the country.