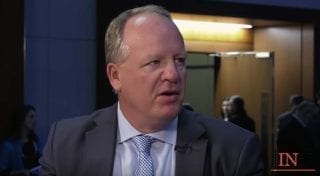 Ross McElroy of Fission Uranium discusses the current state of the uranium market and where he sees prices heading in 2018.

Ross McElroy, president and COO of Fission Uranium (TSX:FCU), chatted with the Investing News Network at the 2018 Prospectors & Developers Association of Canada conference in Toronto.

He said that uranium is in a “very interesting place right now,” as demand continues to grow while reactors are being built “at a rapid pace.”

McElroy explained that China is currently making the most news in terms of building reactors and increasing uranium production. He stated that China is “building at a rate of around eight to 10 new reactors a year … we will see them become one of the largest consumers of nuclear fuel.”

He also discussed the depressed uranium price. For quite some time, insiders have been predicting that uranium prices will increase, but they have yet to move in that direction.

However, with companies such as Cameco (TSX:CCO,NYSE:CCJ) dialing back production, McElroy stated, “we are finally setting ourselves up to force the price of the commodity higher, which is important … we’ll make a healthy environment, then we’ll be able to get more uranium in there to continue to feed the reactors.”

He added, “I wouldn’t be surprised if near the end of this year we’re starting to see some uptick in the price of uranium. It’s got a long way to go, it’s probably going to have to at least double before there’s any new meaningful changes in there. But yes, it could start to take effect later this year.”

McElroy also touched on Fission’s Patterson Lake South project and its latest resource estimate. He stated that the company increased the resource by “about 30 percent globally” and around 8 percent in the indicated category. It “almost doubled our inferred resources,” he noted, which is “a pretty remarkable achievement … in the last two years.”

Watch the interview above for more insight from McElroy, and click here to view our PDAC 2018 playlist on YouTube.

INN: I’m Nicole Rashotte with Investing News Network at PDAC 2018 on Day 3. And Sitting with me today is Ross McElroy from Fission Uranium.

INN: How are you today?

INN: Perfect. So how has the conference been for you so far?

RM: It’s been good. It’s been busy. You know, we’re very busy. A lot of meetings. I think there’s some good buzz in the sector, finally. You know, we’re starting to see some interest again in uranium. We’ve got a very good project and also it’s been a good conference so far.

INN: That’s fantastic. Okay. So, jumping right in, what do you expect from the uranium market in 2018?

RM: Well, uranium is in a very interesting place right now. The demand continues to grow, reactors are being built at a very rapid pace, particularly in developing countries. China is the biggest story out there where they’re continuing to put new reactors on the grid. They’re building I think at a rate at around eight to 10 new reactors a year. We’ll see them become one of the largest consumers of nuclear fuel – uranium. Probably 15 years from now, they’ll be the largest single country out there using nuclear power. So you’ve got them, there’s other really good stories, and yet at the same time, we have a very depressed uranium price and it’s been that way for a while. But now that the lowest cost producers out there, the Cameco’s in the Athabasca Basin, the Kazakhs, these are guys that are putting uranium out but at the lowest cost of any other mines anywhere. They’re starting to dial back production because even they’re not making money in this market. So, I think we’re finally setting ourselves up to force the price of the commodity higher, which is important. You know, it will make a healthy environment. Then we’ll be able to get more uranium in there to continue to feed the reactors.

INN: So there has been a lot of talk about the price of uranium going up. Do you see that happening in 2018?

RM: Well, it hasn’t happened yet. And I’ll tell you, everybody’s crystal ball when they’re trying to predict in short time spans has not been very good over the last several years. But as I said, I think that some of the major catalysts for that to happen are already in place. So, it’s going to start to take effect. Cameco shutting down their world-class McArthur River mine in Saskatchewan – that supplies around 15 million pounds of uranium a year. That’s about 10 percent of the global consumption and one of the lowest cost producers. That coming offline is going to put pressure on. It might take another six, seven months before that maybe starts to take bite. But I wouldn’t be surprised if near the end of this year, we’re starting to see some uptake in the price of uranium. It’s got a long way to go. It’s probably going to have to at least double before there’s any new meaningful changes in there. But yeah, it could start to take effect later this year.

RM: Well, yeah. I mean, it hasn’t been a sector that’s been in favor for an awful long time, so I understand that it’s easy to be gun shy in there, but I think we’re in a point too where only the strongest have been survivors in this sector and I think where our story certainly fits that category. Having patience is probably a big virtue. There is a turnaround, I believe, coming and you want to be positioned. When it does change, it changes very quickly and you don’t want to be playing catch-up later on. So they need to do their homework now, see who’s got the best projects, anywhere which ones, and companies that have cash. So, you’re looking for companies that are well managed, have a great asset, they’ve got cash, on a clear path forward. If you can start making that decision now at this time and maybe start investing, you’ll be catching the perfect timing I think of the cycle.

INN: Okay. That’s great. So talking a little bit about Fission Uranium now, you’ve had some exciting news with Patterson Lake South Project. Can you give me some key highlights of the news that was just released on that?

RM: Sure. Yeah. What we just released a couple of weeks ago was a resource estimate update. Now, it has been about two and a half years since our last major announcement which was our PEA, the preliminary economic assessment study, and that was a resource update. So in the last two and a half years we’ve been stepping away from the main deposit, testing on strike. We found three new high-grade zones of mineralization on our trend. Now, we’ve been able to add them into a resource. So that’s what we released two weeks ago. That increased our resources by about 30 percent globally. About 8 percent increase of indicated resources and about almost doubled our inferred resources. Pretty remarkable achievement I think in the last two years of working.

INN: Congratulations on that.

INN: Are there any other milestones that you can let investors in on for this year or even next?

RM: Well, I think this year we have a really, truly significant milestone that we probably should be able to deliver by the end of 2018, our pre-feasibility study. So that’s kind of the next level up in taking the project further and further… we hope to eventual production, but the pre-feasibility will be the next major milestone above the PEA. There’s some work going on in the field right now. It’s much more engineering focused work so you’ve got geotechnical, drilling, we have metallurgical studies, we’re just about completing our winter program right now. As I said, this data all gets collected and we’ll be able to provide a pre-feasibility study, for I’m hoping by the end of 2018.

INN: Okay. That’s fantastic. That’s really exciting. Congratulations on all of the milestones you’ve been hitting.

INN: And thank you so much for chatting with us today. Again, I’m sitting here with Ross McElroy from Fission Uranium. I’m Nicole Rashotte with Investing News Network. Thank you so much.

How the US Section 232 Probe Could Impact the Vanadium Market
CRU Group: Silver Demand from Solar Panels has Peaked
ERG: Cobalt to Benefit from Europe’s Push for EVs
Demand for Canadian Organic Foods Creating Opportunities in the Organic Fertilizer Industry