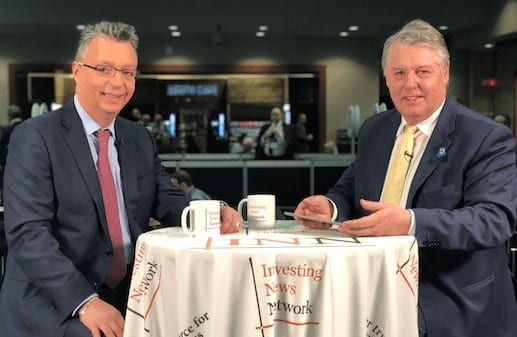 According to Blue Sky Uranium (TSXV:BSK,OTCQB:BKUCF) CEO Nikolaos Cacos, nuclear energy is gaining popularity among poor and emerging countries as they move away from importing oil and coal.

In the interview below, Cacos talked about the company’s Amarillo Grande project in Argentina and how the project brings the company one step closer to becoming the country’s leading domestic supplier of uranium. Blue Sky Uranium recently completed a preliminary economic assessment (PEA) on the property, establishing a resource of over 23 million pounds of uranium and 11 million pounds of vanadium. Cacos believes the resource has the potential to expand to 100 million pounds as the company continues to explore and drill more of its Argentinian land package.

According to Cacos, uranium’s more notorious use cases have dampened the global market, however as more nuclear reactors come online uranium could become an essential element in the nuclear energy industry. Cacos believes Blue Sky’s Amarillo Grande project is optimally located to serve the potential uranium market, as the country is known for accommodating mining companies, especially under the leadership of President Mauricio Macri.

Below is a transcript of our interview with Blue Sky Uranium CEO Nikolas Cacos. It has been edited for clarity and brevity.

Investing News Network: Please give our investors an overview of Blue Sky Uranium and its Amarillo Grande project in Argentina.

Blue Sky Uranium CEO Nikolaos Cacos: We have an impeccable track record and a 26-year history in Argentina through Grosso Group and we’ve made four major, world-class discoveries.

Our first discovery was the Gualcamayo gold mine, which has been put into production and was run by Yamana Gold (TSX:YRI). Our second discovery was the Navidad silver deposit, which is the world’s largest undeveloped silver deposit and is held by Pan American Silver and Ross Beaty. We also discovered the Chinchillas silver mine, which we recently put into production with SSR Mining (TSX:SSRM).

We’re here to talk about uranium though. In southern Argentina, we’ve uncovered an entire district and we own it all: 145-kilometer by 50-kilometer strike point. I like to call it the Saudi Arabia of uranium, it’s that big.

INN: Are uranium producers driving the growth of the market or are there other factors involved?

NC: Uranium is coming out of a bear market. The spot price has increased by 50 percent in the past year due to producers driving the price up. We’re also seeing organic growth in the market due to a renewed interest in nuclear reactors. A lot of emerging countries are also turning towards uranium because they don’t want to tackle the politics of importing oil and coal. In the last decade, we’ve also seen the price of building a reactor come down.

Uranium has no carbon footprint and it’s being recognized around the world. It’s reliable and the most efficient form of generating electricity.

INN: There is a market for uranium in the US and emerging markets in China and India, but where is uranium going to be consumed the most?

NC: China is definitely a big driver. There are approximately 71 reactors in construction across the globe and half of them are in China and India, but they’re also in places like the United Arab Emirates. They’re also becoming more popular in Africa and Argentina as well. Argentina currently has three producing reactors, with one in construction and two more have been commissioned. The country is, again, doing this to avoid the politics and money associated with importing oil. They also want to reduce their pollution and carbon footprint.

INN: What else has sparked confidence in uranium?

NC: It’s not just about finding an alternative energy source. Uranium has a good safety record and the only thing dangerous about uranium is the fear of it. When we first discovered electricity, for example, had we used it to electrocute people, we’d be terrified of it. Uranium was originally used to build nuclear bombs and this has generated a lot of fear in the general populous.

Take Fukushima, for example, people call it a nuclear disaster. No one, however, was killed by the nuclear fallout. They were killed by the earthquake and tsunami. There was another reactor further back and nothing happened there. The Fukushima reactor shouldn’t have been operational, by the way, and decommissioned a long time ago.

INN: What phase of development is the Amarillo Grande project in? What are your next steps?

NC: We just published the property’s first PEA. We’ve completed work throughout the property, but have concentrated our efforts on the southern portion of the property for the past year and a half. According to our PEA, if we were in production today, we’d be making money – even at the current prices. Our sustaining cost is approximately $18 per pound and the average contract price is between $50 and $60.

This time last year, we established our first resource of 23 million pounds uranium and 11 million pounds vanadium. The exciting thing about the project is that we can take our current 23 million pounds and turn it into a 100 million pound deposit as we keep exploring. It would be similar to what they have in Kazakhstan at the 100-million-pound Inkai deposit.

Our deposit also lies within the first 25 meters of the surface, meaning we won’t have to blast. In terms of costs, we’ll use an excavator and leach it. This has the potential to be one of the largest and lowest-cost uranium deposits in the world.

Management has funded its own exploration and right now we own over 60 percent of the company. What we invest is spent on the right things and our goal is to expand the deposit in the next six months. We’d like to become Argentina’s first domestic source of uranium.

INN: Are you developing it yourselves or are you looking for a partner?

NC: We can expand it ourselves. We have the track record and expertise to complete the feasibility study and go into production, but we also know that production is different than exploration. We’d either bring in the expertise or partner with someone.

NC: Argentina is a great place for many reasons. Geologically, there is potential and until 25 years ago it had never been explored. As the eighth largest country in the world, there’s a lot of area to explore and that’s what we’ve been doing. Politically, President Macri runs the country like a business. He wants to eliminate red tape and regulations. He also wants to promote and grow the mining sector because it’s important to the country’s economy.

In the 26 years that we’ve been there, we’ve never had a permit denied and the community has never said: “don’t do it”. We’ve never had any problems and we love working there.

NC: We’re located 20 kilometers from the town of Valcheta, where we can draw workers from. There are power lines, a railway line and we’re about 55 kilometers from a deep sea port. All the infrastructure we need is there. Uranium exploration isn’t common, but we know we have something spectacular and it’s captured the attention of the majors, but we still have a long way to go.

The information contained here is for information purposes only and is not to be construed as an offer or solicitation for the sale or purchase of securities. Readers should conduct their own research for all information publicly available concerning the company. Prior to making any investment decision, it is recommended that readers consult directly with Blue Sky Uranium and seek advice from a qualified investment advisor.