Appia Energy Corp. (CSE:API) (OTCQB:APAA) (FSE:A0I.F) (FSE:A0I.MU) (FSE:A0I.BE) (the “Company” or “Appia)  is pleased to announce the successful completion of 2,042.1 metres drilled in 44 diamond drill holes (“DDH”) on the Alces Lake property (the “Property”) northern Saskatchewan, as part of the on-going summer exploration program (the “Program”).

A total of 6 target areas were drilled based on geological and geophysical defined targets; 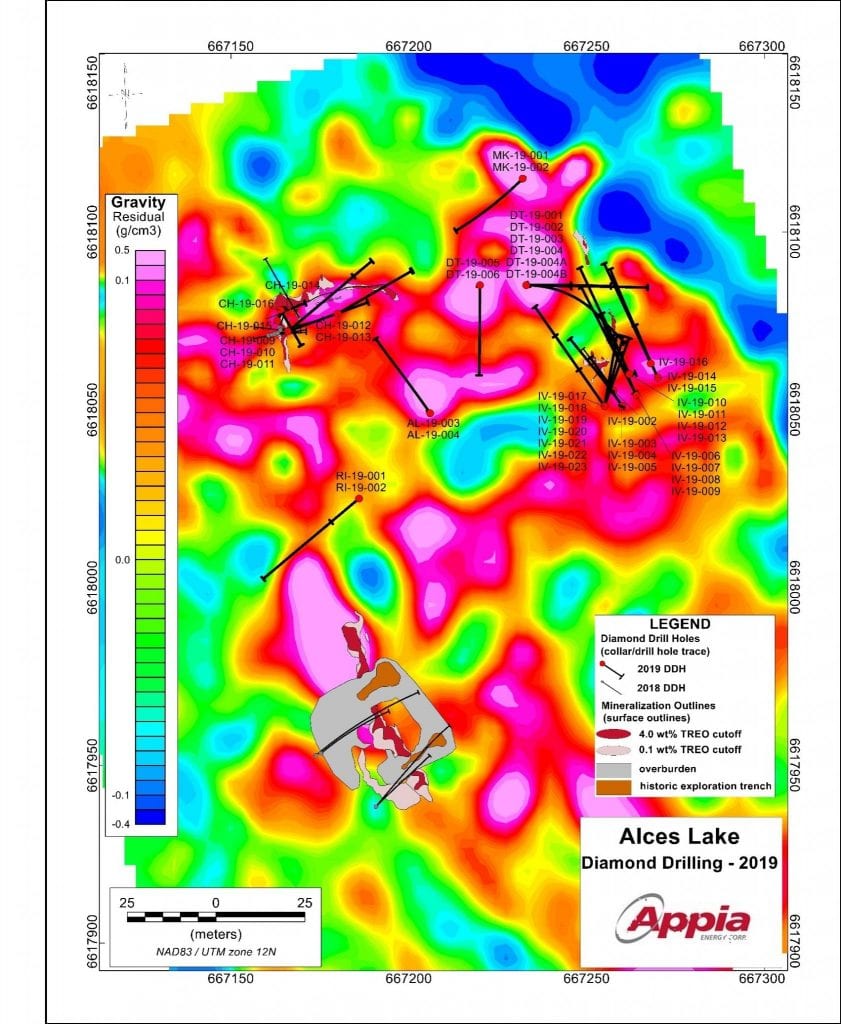 The monazite-bearing mineralization system was intersected in 40 of the DDH in all target areas with the exception of AL. High concentrations of locally banded to massive monazite were observed in 20 of the DDH in target areas CH, DT, IV and RI. Based on previous outcrop and drill core sample studies, the rare earth elements are hosted within the mineral monazite.

Mr. James Sykes, Appia’s Vice-President, Exploration and Development, comments: “The drill program was an important and successful progression for Appia on the Alces Lake property. We defined monazite mineralization in three new areas (Dante, Mikaela and Richard) and also intersected new sub-surface zones exhibiting high concentrations of monazite within Dante, Ivan and Richard. The mineralization system continues to prove to be extensive, with multiple new discoveries, as well as over a 90% drill hole intersection success rate. The widespread nature of monazite indicates the mineralization system is far more extensive beneath the surface than what we’ve observed thus far. We remain excited to continue exploring for monazite-hosted rare earth elements on the Property.”

Drill hole assay results will be released in the coming weeks as they are received and analyzed by the Company. In addition to diamond drilling, the Company is continuing regional exploration and prospecting for additional REE surface zones. The Company remains fully funded to complete this summer’s Program.

The Alces Lake Property encompasses some of the highest-grade total and critical REE mineralization in the world, hosted within numerous surface and sub-surface showings to which the depth extent remains unknown. Critical rare earth elements are defined here as those that are in short-supply and high-demand for use in permanent magnets and modern electronic applications (i.e.: Neodymium (Nd), Praseodymium (Pr) and Dysprosium (Dy)). The Alces Lake project area is 14,334 hectares (35,420 acres) in size and is 100% owned by Appia.

The technical content in this news release was reviewed and approved by Mr. Ken Wasyliuk, P.Geo., Project Manager for the Alces Lake project, and a Qualified Person as defined by National Instrument 43-101.

Appia is a Canadian publicly-traded company in the uranium and rare earth element sectors. The Company is currently focusing on delineating high-grade critical rare earth elements (“REE”) and uranium on the Alces Lake property, as well as prospecting for high-grade uranium in the prolific Athabasca Basin on its Loranger, North Wollaston, and Eastside properties. The Company holds the surface rights to exploration for 57,048 hectares (140,968 acres) in Saskatchewan.

The Company also has a 100% interest (subject to a 1% Uranium Production Payment Royalty and a 1% Net Smelter Return Royalty on any precious or base metals payable, provided that the price of uranium is greater than US$130 per pound) in 12,545 hectares (31,000 acres), including rare earth element and uranium deposits over five mineralized zones in the Elliot Lake Camp, Ontario, which historically produced over 300 million pounds of U3O8 and is the only Canadian camp that has had significant rare earth element (yttrium) production. The deposits are largely unconstrained along strike and down dip.

Appia’s technical team is directed by James Sykes, who has had direct and indirect involvement with over 550 million lbs. U3O8being discovered in five deposits in the Athabasca Basin.

Cautionary Note Regarding Forward-Looking Statements: This News Release contains forward-looking statements which are typically preceded by, followed by or including the words “believes”, “expects”, “anticipates”, “estimates”, “intends”, “plans” or similar expressions. Forward-looking statements are not guarantees of future performance as they involve risks, uncertainties and assumptions. We do not intend and do not assume any obligation to update these forward- looking statements and shareholders are cautioned not to put undue reliance on such statements.

Neither the Canadian Securities Exchange nor its Market Regulator (as that term is defined in the policies of the CSE) accepts responsibility for the adequacy or accuracy of this release.