New direct link between Russia and Germany is the first of two twin lines that could eventually supply Western Europe with 55 billion cubic metres of gas per year. 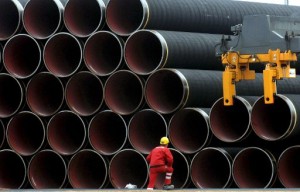 The $10.4 billion line that runs 1,224 km under the Baltic Sea could eventually supply Western European markets with up to 27.5 billion cubic metres (bcm) of natural gas per year, and will be joined by a twin line with similar capacity in late 2012 that will double the project’s total potential throughput to 55 bcm per year.

Nord Stream circumvents traditional routes through Belarus, Poland and Ukraine, which have become less reliable for Western European consumers in recent years due to payment disputes that have led to periodic supply disruptions. The Ukrainian route in particular has become a worry for both Russia and Western Europe, as nearly 80 percent of Russian exports to Germany, Italy, and France transit through Ukrainian territory.

The new link has been brought online in the wake of a major shift in German energy policy announced in May, which will see all of the country’s 17 nuclear power plants phased out by 2022. The decision was made following the meltdown of the Fukushima Daiichi reactor in Japan that was crippled by an earthquake and subsequent tsunami that struck in March, though popular opposition to nuclear power in Germany has traditionally been strong.

Consumption of natural gas is expected to increase to help offset the loss of nuclear power in Germany, which accounts for nearly 20 of the 80 gigawatts (GW) required to run the German economy, and the Nord Stream pipeline is seen as a key piece of the country’s energy mix as it moves towards cleaner sources of fuel.

Volumes flowing through the line will be modest to begin with, according to Dirk von Ameln, a director at Nord Stream AG. Supply through the new line will start at 1 million cubic metres (MMcm) per hour, which translates to roughly 8.5 bcm per year.

This is expected to be eventually be ramped up closer to the pipeline’s full capacity, however, as off take agreements have been signed for a majority of the 27.5 bcm per year the first phase of Nord Stream has been designed to transport.

German firm Wingas, a joint venture between Gazprom and Wintershall, will take 9 bcm from Nord Stream annually for 25 years, DONG Energy A/S of Denmark will take 2 bcm, while E.ON Ruhrgas and GDF Suez will take 4 bcm and 2.5 bcm respectively.

Gazprom Marketing and Trading Ltd., meanwhile, the wholly owned UK subsidiary of Gazprom, will take 6 bcm a year from the first phase of Nord Stream.

Construction of the first phase of the offshore section of Nord Stream was carried out by Italian firm Saipem S.p.A. (OTC PINK:SAPMY), and the Eni S.p.A. (NYSE:E) subsidiary is also contracted to build the twin line scheduled for completion next year.

Despite lingering criticism that the Nord Stream project is a waste of money and a means for Russia to dodge a compromise with Ukraine in their ongoing dispute, the completion of the first of the two planned lines has put Gazprom in a strong position entering 2012.

The company increased its sales of gas to Europe by 42 percent over the first six months of 2011, and expects sales to jump to 164 bcm a year in 2012 from the 152 bcm expected to be sold this year.