MGX Minerals Inc. (“MGX” or the “Company”) (CSE:XMG) (FKT:1MG) (OTC:MGXMF) is pleased to report estimated prospective resources (the “Estimate”) attributable to the Company’s Paradox Basin Petrolithium Project (the “Project”), consisting of leasehold and royalty interests in San Juan County, Utah and San Miguel County, Colorado.
The Estimate was prepared by the Ryder Scott Company, L.P. (“Ryder Scott”), an independent qualified reserves evaluator within the meaning of National Instrument 51-101 – Standards of Disclosure for Oil and Gas Activities (“NI 51-101”), with an effective date of June 30, 2017. The Estimate was prepared in accordance with NI 51-101 and the Canadian Oil and Gas Evaluation Handbook. Although the salts may not perform well under stimulation or fracking, the Project contains many clastics and is highly pressurized. Management estimates the total cost required to achieve commercial production from the Project to be $8 million based on the expectation of completion of 3D seismic survey and one horizontal well being drilled. The timeline of the Project is five years, with the estimated first date of commercial production being 18 months from the commencement of drilling using vertical and horizontal drilling techniques along with proprietary patented water handling technology as the Project was conceived. Significant economic factors that may affect the Project relate primarily to operational costs, efficiencies and commodity pricing. 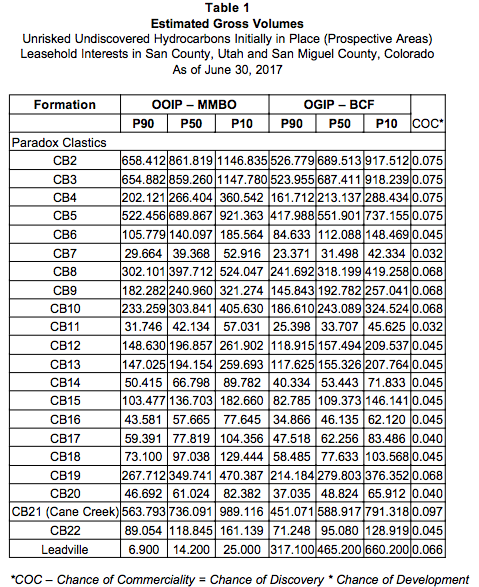