Electric vehicle technology is spreading, but supercars are a segment that could hold on to internal combustion engines.

British sports carmaker Lotus recently unveiled the Evija, which it bills as the first all-electric hypercar from an established brand.

Alternate energy supercars, or supercars that aren’t exclusively petrol powered, aren’t new — multiple car brands have been dabbling in this area for years, with BMW’s (OTC Pink:BMWYY,ETR:BMW) i8 model perhaps being the most prominent among established brands.

But all-electric supercars are a relatively new area that Felipe Munoz, global automotive analyst at JATO, said is throwing up challenges for carmakers because of who buys supercars.

“Supercars are known for being performance cars,” he said. “The last thing a petrolhead driver wants is just an eco-friendly or zero-emission car, so it’s difficult (for carmakers).”

He explained that supercars are traditionally bought by people that want the emotion and the thrill of a high-speed, loud car, so emissions and efficiency rarely play into the decision.

Lotus isn’t alone with the Evija, however. Luxury brand and supercar maker Porsche (OTC Pink:POAHF,ETR:PAH3) is on the cusp of releasing its all-electric Taycan in September this year, while Ferrari’s (NYSE:RACE) plug-in hybrid SF90 is going to be the brand’s most powerful production car ever. 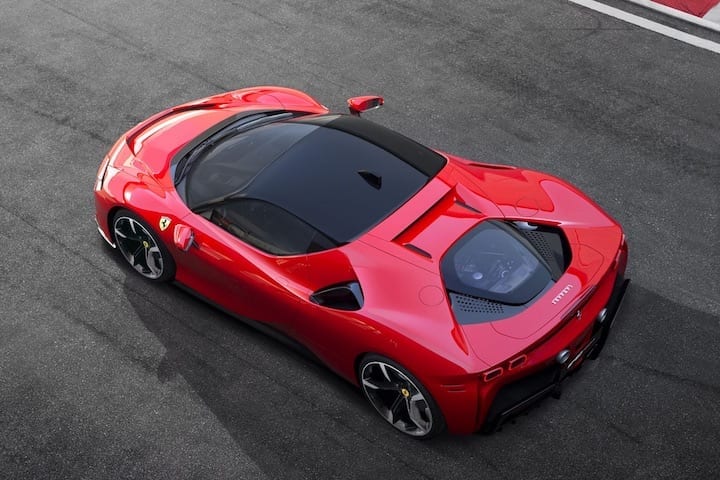 While supercar brand Lamborghini has hybrid variants on the way, the Italian brand’s CFO said earlier this year that Lamborghini’s customers “are not currently interested” in any all-electric models. 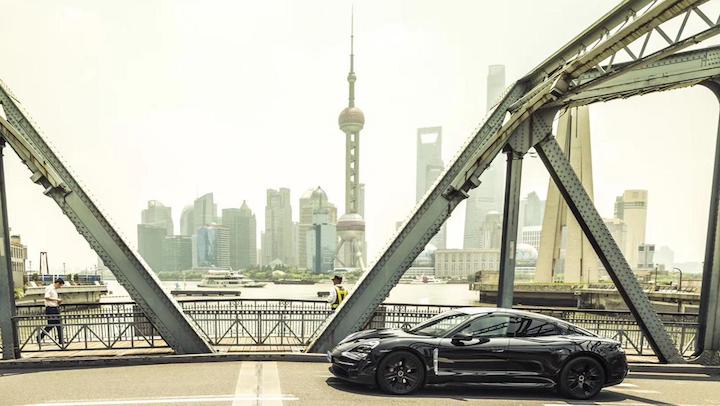 Munoz said that, despite the challenges, supercar makers (besides Lamborghini, apparently) are working on getting into the space.

“I wouldn’t say we are far from seeing electric supercars. … Of course, they have to be positioned in a different way,” he said, noting that the strengths of supercars as cars, such as their big engines and loud noises, don’t translate to EVs, which these days are better known as silent little city cars.

“That’s the challenge, to change the mentality of many consumers,” Munoz said. “There’s a big part of their clients that are not willing to buy or drive these electric cars, but I think as the industry adopts these new technologies, and they prove to be efficient, and they can bring some new emotions while driving, many of these people are going to move to the new technologies and new electric supercars.”

He added that the supercar industry is one of the hardest segments for EV technology to break into, and likely will be one of the last segments with petrol-engine technology.

“I think we will continue to see these big petrol or combustion engines in these cars for much longer.

“In my opinion, in the future they are going to become a niche product, because the mainstream, the big part of the sales of the supercar brands, are going to be electric.”

For Lotus, the journey towards an all-EV future seems to be one it’s set on, with company CEO Phil Popham quoted by Autocar as saying that Lotus will be focusing on “rebuilding” its entire range with all-electric variants from the end of 2020 onwards.

Lotus is a part of Chinese carmaker empire Geely’s (HKEX:0175) portfolio, along with Volvo and the electric performance brand Polestar, which is intended to go to toe to toe with Tesla (NASDAQ:TSLA).

The part you wanted to read

The Evija, which was announced in July 2019, will have 1,972 horsepower and 1,700 newton meters of torque, making it the world’s most powerful production road car, according to Lotus.

It is also a rare offering, because only 130 will be made in the company’s Norfolk facility in the UK. 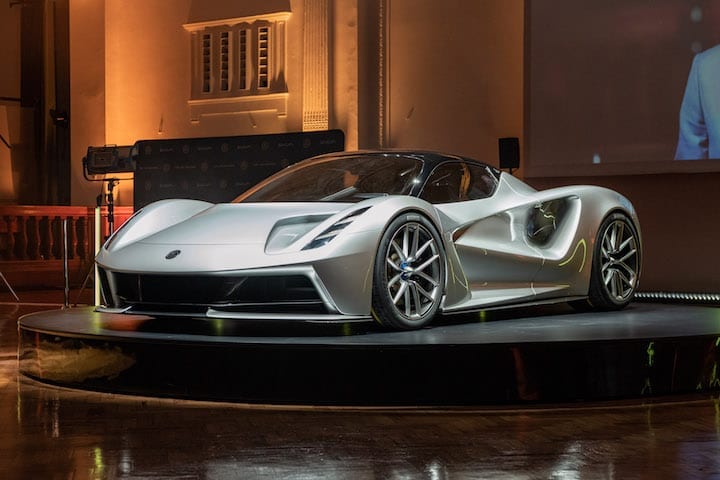 The company claims the car will weigh only 1,680 kilograms due to its carbon fiber shell.

For those interested in the battery specs, the company has so far promised a range of 250 miles from its mid-mounted 2,000 kilowatt battery pack.

Power from the pack will go to four motors, one on each wheel, making the Evija an all-wheel-drive.

The supercar will fetch a price of 1.7 million pounds, with a 250,000 pound deposit required to order one today. Production will start in 2020.

EV creep in other segments

Two other segments that EV technology has yet to fully break into are SUVs and trucks — both of which are hugely popular all over the world, with carmakers introducing hybrid technology into the space across the board.

Fully electric SUVs and trucks are hard to come by, however, with the current all-electric SUV offerings on the market being smaller city SUVs rather than traditional large off-road vehicles or pickups.

That’s not to say nobody is trying though, with upstart company Rivian trying to square up to Tesla in the American EV market with two models: an SUV and a truck. Rivian benefited from a US$700 million investment led by Amazon (NASDAQ:AMZN) and a US$500 million investment from Ford (NYSE:F) earlier this year. 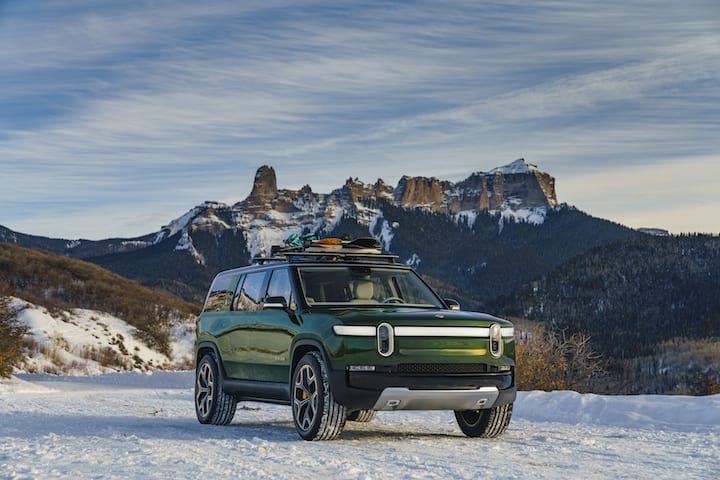 Munoz said that the challenges facing carmakers when it comes to the development of SUVs and trucks are primarily to do with vehicle weight — a completely different issue to the problem of EV tech in supercars.

He said that, while the weight of SUVs and trucks is a problem for carmakers developing EV tech, this is a problem that has to be overcome due to market forces.

“We must remember that SUVs are driving growth, so carmakers must consider electrification in this segment,” he said.

Munoz added that, given SUVs are sold in such large numbers, they are “almost mandatory” in markets around the world for carmakers to be successful, so EV technology has to be a part of the segment’s future — unlike the future of supercars.

“It’s not the case with supercars, because supercars are not moved in big volumes, and they can continue working as niche car manufacturers.”

John Pfahl of SRK Consulting told the Investing News Network that the question of technology in all segments of the automotive industry has basically already been answered.

“From a power/acceleration perspective, (an) EV can certainly replace any internal combustion engine (ICE),” he said, pointing to Tesla’s record of going toe to toe with supercars.

“This is one of the big selling points of an EV: high torque across the full RPM range and a more efficient delivery of power to the wheels.

“However, to replace ICEs you also have to take into account other factors such as range and cost,” he added, saying that while larger batteries with more range are available, the higher costs make them prohibively expensive — and larger batteries in SUVs and trucks will price the EV options out of most consumers’ range.

“Therefore, right now, the main gap is on long -ange vehicles, especially larger vehicles, that are price sensitive. The low end of the market (<$30,000) also cannot yet be covered without lower battery costs unless it is for short-range vehicles with small batteries.”

Speaking of segments driving growth like SUVs and trucks, JATO’s latest report on global car sales reveals that sales of pure electric vehicles increased by 92 percent in H1 2019 thanks to a rapidly increasing range of vehicles for consumers to choose from, as well as incentives and growing consumer acceptance of the benefits of EVs.

While China dominates the EV market, with 56 percent of pure electric vehicles sold globally going to the Asian powerhouse, Europe is starting to welcome EVs with open arms.

Despite the increasing market share, Munoz said that for now, EVs are still a long way away from dominating the market.

“When you look at the bigger picture, they are still a niche market. Their market share is very low. They still need to take off.”

When asked when he believes EVs (all electric and alternate energy) will be able to secure a 50 percent market share of all vehicles sold, Munoz said that that goal can be reached before 2030 in markets like China and Europe, though more work needs to be done before it can be reached.

“It depends on how fast these carmakers can bring more efficient cars (to market) in terms of range, and how the government deals with infrastructure.

“This is the big thing — not even in the biggest economies or the most advanced societies is it easy to find a charger for your vehicle. These two things must be addressed, and if they are correctly solved, by 2030 we will see this change.”