A general overview of tantalum properties, uses, industry and investing. 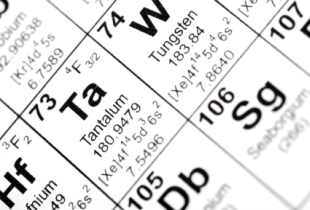 Tantalum (Ta) is a chemical element with the atomic number 73 and is named after the Greek mythological figure Tantalus. First discovered in 1802 by Anders Ekeberg, tantalum was first produced in metallic form in 1864. Prior to tungsten, metallic tantalum was used as filament in light bulbs. The rare, hard metal is blue-gray in colour.

Some of its other special qualities include:

Tantalum ores occur mainly in Australia, Brazil, Canada, Africa nations including the Burundi, the Democratic Republic of the Congo (DRC), Gabon, Namibia, Nigeria, Rwanda, South Africa and Uganda; and to a lesser extent Ta is also found in southeast Asia.

Tantalum is mainly used in electronic components such as capacitors and some high-power resistors in everyday items like cell phones, personal and laptop computers, digital and video cameras, LCD/Plasma televisions, and handheld gaming devices.

Since 1995, demand for tantalum has grown on average by about 8 to 12 per cent every year, increasing exploration projects globally.

Supply is quickly coming under pressure since the United States Defense Logistics Agency (USDLA) curbed stockpile sales, which had previously flooded the market. Adding further distress, Australia’s major tantalum operation, responsible for 30 per cent of global supply, shut down in 2008. The Great Lakes region of Central Africa has become a focal point of supply production; however the bloody political strife in the DRC, of which tantalum plays a financial role, may cause the world to look elsewhere for its tantalum supplies.

The supply/demand fundamentals for tantalum are becoming much more price positive. Tantalum does not trade in spot markets, but rather in negotiated markets with long-term fixed contracts. Interestingly, it’s considered taboo in the tantalum industry to publicly discuss contract prices.

The handful of actual tantalum producers sell their ore to just a few processors, which operate in China, Estonia, Germany, Japan, Kazakhstan and the US. Once processed, the product for electronic goods consumption is then sold to capacitor manufacturers such as Kemet Electronics, AVX, Samsung and Vishay, who then sell those capacitors to companies like Apple (iPod), Sony (Playstation), Research in Motion (Blackberry), Panasonic, Nintendo (Wii), Cisco Systems Inc, Hewlett-Packard and IBM.

The violent political conflict in the Congo has unfortunately been funded in large part by conflict minerals like gold, tin, tungsten and tantalum. The guerrilla and so-called military soldiers using what amounts to slave labour to mine tantalum ore has made central Africa a cheap place to acquire the mineral, making it stiff competition for other producing regions.

However, concerned NGO’s, local and international government officials, industry leaders and even electronics consumers are putting pressure on the tantalum industry to ensure conflict minerals are not making their way into consumer products. The hope is that by cutting off the demand for conflict minerals, the militias will lose the ability to finance their murder, rape and pillaging of the region’s people and resources.

Two of the most vocal groups calling for action are Global Witness (instrumental in bringing about the Kimberley Process, which has helped to curtail the blood diamond trade) and the Enough Project founded by the Center for American Progress.

Tantalum is a hot investment right now because its supply/demand fundamentals are strong and it offers investors the opportunity to make a difference in the world. The conflict in the Congo and the pressure from organizations like Global Witness and international agencies like the UN to halt the traffic of conflict minerals is expected to place huge downward pressure on supply at the same time that demand for tantalum products is heating up.

The tantalum mining sector is a tight industry with few major players and there now exists opportunity for juniors operating in conflict free zones to establish a foothold in the market. According to Sam Kiri, director at Proactive Investors North America, “the tantalum industry is experiencing a transitional period on a number of fronts and there exists only a handful of emerging companies poised to take advantage.”

Investing in and building up the conflict-free tantalum industry will help put the pressure on those companies still purchasing conflict minerals to clean up their act and will hopefully help to eventually end the atrocities occurring on a daily basis in the region.