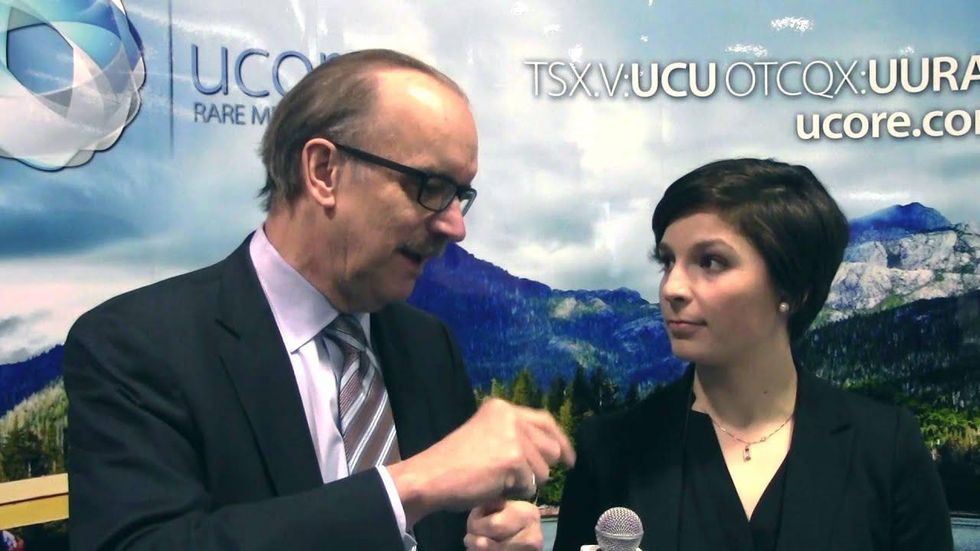 At PDAC, Resource Investing News spoke with Ucore COO Ken Collison to get more insight into the company’s latest news. This week, the company reported the success of IBC’s MRT technology for the separation of rare earth elements, and also secured exclusive rights to the technology for $2.9 million.

It was a big news week for Ucore Rare Metals (TSXV:UCU). On Monday, the company announced that it has successfully separated each of the rare earth elements from a pregnant leach solution derived from feedstock from its Bokan Dotson-Ridge project; the next day, it paid $2.9 million to secure exclusive rights to the Molecular Recognition Technology (MRT) that brought that success from IBC Advanced Technologies.

Resource Investing News spoke with Ucore COO Ken Collison at the PDAC conference in Toronto to get more insight into the news.

According to Collison, IBC has been using its MRT technology for roughly 20 years, and has 40 to 50 MRT plants (note: Collison means to say “MRT” not “million” in the video below) scattered around the world. However, it has not previously used the technology for rare earth elements. While Collison admitted he at first thought that rare earths being separated at 99 percent purity was “too good to be true,” he said he was convinced once he saw the results. “It’s going to revolutionize the rare earth business,” he said.

Collison also explained how the MRT process works, how it compares to traditional solvent extraction methods and what the next steps will be moving forward with the process. He also spoke about recent drill results at Bokan Dotson-Ridge and stated that Ucore expects to release its new resource estimate for the project this year. Finally, the COO gave his thoughts on where rare earths prices are headed this year.

Watch the video below to see what he had to say.

RIN: I’m Teresa Matich with Resource Investing News. Here with me today at PDAC is Ken Collison, COO of Ucore Rare Metals. Ken, thank you for joining me.

KC: Thanks for having me.

RIN: So, Ucore just had some big news announcing the success of IBC’s MRT technology for the separation of rare earths and you’ve secured exclusive rights to that technology for $2.9 million. Can you give an idea of the significance of that news?

KC: Yeah. This is pretty great. The typical method of extracting rare earths is separating them into 15 individual earths. It’s called solvent extraction. It’s a plant that would fill this room, $200 million to $300 million. Not very environmentally friendly.

With this process, we can separate the 15 individual rare earths and we’ve done in the lab, it’ll be a small plant, very energy-efficient, very quick-reaction, so it’s a very small facility and green.

The big thing is we were working with IBC, and IBC has been doing this for about 20 years, but not in the rare earth business. They’ve been doing it. They’ve recovered PTMs out of catalysts in the oil industry. And I saw this facility at ASARCO Smelter or copper refinery in Amarillo, where they removed the bismuth out of solution prior to using it in the process because copper refineries don’t like bismuth. They used to do that with a large iron exchange plant, now they do it with two MRT columns. They changed about five years ago. There may be 4 feet or 5 feet in diameter, about 5-6 feet high, we say to this large IX plant.

IBC has got 40 MRT to 50 MRT plants scattered around the world, even the one China, but they’ve never done rare earths. And so, we now have an agreement with them. It uses exclusive rights to use this process for rare earths, for recycling, and for reprocessing tailings to recover any minor metals out of tailings.

We’ve done the lab work. We’ve separated all the rare earths. We separated scandium and yttrium. Yttrium is usually included in rare earths, but it’s not. And we’re going to be doing niobium. We did this and a couple of the amazing things about it is it recovers over 99 percent of each one of these elements, and produces for the rare earths better than 99% purity for each one.  So, the results are remarkable.

When it first happened, you know, I’m a mining engineer, you think it’s too good to be true, not a chemist. And so, as we did them, and saw the results, you realize that, yes, this is what they do. We talked to somebody that’s using it at ASARCO and see how it works. It’s true, it’s just amazing. It’s going to really – it’s going to revolutionize the rare earth business.

RIN: That’s excellent. So, how does the MRT process work, and you’ve spoken a bit about this but, any more benefits and challenges you can mention?

KC: Well, the way it works and you’ve got a mining engineer explaining chemistry now, is that they developed what’s called a ligand. You know, ligand is an altered molecule that attracts another molecule and only that other one. And so, like, if they want to recover dysprosium, they create a ligand that attracts the dysprosium molecule. They coat either a silica gel or a plastic like bead almost with it, fill it with a column. You run your leach solution through there, and each element has what they call a selection factor, and some are easy, well, I say, it’s like love at first sight. Some of them will see that ligand and they go, “I’m on,” and you can’t get it off.

Others, you got to take them for dinner and woo them a little bit before, by putting them through two or three columns, to get that same recovery. But to get over 99 percent recovery and producing this 99 percent purity, is pretty amazing. It’s very, very good.

RIN: Okay. And now that you’ve secured rights to this process, what’s the next step?

KC: The next step is we’re going to produce – IBC will manufacture a small pilot plant in their facility in Texas. They’ve got a large facility in Houston where they recycle catalysts. And then, we’ll be able to test anybody else’s concentrates and run it through this pilot plant. It’ll be fully automatic. And we’ll then also use it for when we pilot plant our own process shortly. We’ll be able to tack it onto the backend so that we can feed the upgraded ore in one end and get the rare earths out of the other end of the pilot plant.

RIN: And Ucore also recently reported expanding the mineralization at Bokan Dotson-Ridge to a significant depth. Just how big is the potential looking there now?

KC: Well, we added, oh, about a third – about an extra 100 meters of depth. The ore bodies open at depth, it’s open on strike because of the type of geology, there’s no reason to believe it doesn’t continue quite a bit deeper. But we had our drill program last summer. We’ll be coming out with a new resource shortly. And, you know, it’s very, very predictable ore body.

So we hit the ore body when we where we were supposed to hit it. And we’ve announced the grades. The grades were good and we add five deep holes that have extended the ore body about 100 meters below where it was before.  So, it’s good.

RIN:  What other milestones can investors look forward to hearing about from Ucore this year?

KC: Well, there’ll be the new resource estimate and what the program was to do was to raise the inferred resource up the measure and indicated, which you’re required to do a feasibility study. We’ve awarded the feasibility study just shortly ago to Ausenco.

RIN:  And finally, Ken, what are your thoughts on where rare earths prices are headed in 2015?

And so, I think we’ve seen the bottom of the market and now we’re seeing recovering back to what should be a normal price range.

RIN: Okay. And before we go, Ken, I understand, you have a sample of the rare earths salt here with you.

Certainly, there’s a lot of interest because of this from the military and various other applications because right now, 95 percent of this product comes from China.

RIN:  Okay. That’s excellent news. Thank you for joining me.

KC: Okay. Thank you very much.