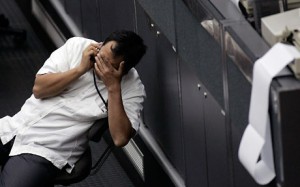 Rare earth miners will be eager to see out the last few days of the month after enduring a miserable November, with stocks in nearly all the top names in the sector taking a beating in the markets over the last three weeks.

Molycorp Inc. (NYSE:MCP) was down almost 30 percent for the month as of Friday, a substantial loss for the biggest rare earths producer outside of China. Tasman Metals Ltd. (TSXV:TSM) has also seen its value drop by over a quarter(27.63 percent) since the beginning of the month, while Avalon Rare Metals Inc. (TSX:AVL) was down 18.67 percent over the same timeframe.

Quest Rare Minerals Ltd. (TSXV:QRM) had a rough month as its stock tumbled 17.27 percent, while Great Western Minerals Group Ltd. (TSXV:GWG) and Ucore Rare Metals Inc. (TSXV:UCU) were both down by 12.50 percent as of Friday.

Lynas Corp. (ASX:LYC), despite suffering a setback with the licensing of its advanced materials plant in Malaysia and a subsequent delay of the facility’s anticipated startup until 2012, fared better than its competitors with a drop of just 8.71 percent.

Frontier Rare Earths Ltd. (TSX:FRO), however, made it through the month relatively unscathed, down only 5.47 percent as of Friday.

And it was only Frontier that managed to outperform the S&P 500 (INDEXSP:.INX) over the course of the month, which was down by 7.55 percent.

Inner Mongolia Baotou Steel Rare Earth Group (SHA:600111), the largest rare earths producer in the world, also fared a little better than most in the sector, down by just 3.19 percent.

The main catalyst behind the recent downturn in fortunes for most of the sector has been the sharp decline of prices for most rare earth elements (REE). According to statistics from Bloomberg Industries, the basket of 17 REE’s have dropped by an average of 27 percent from their peak in July this year.

Gambardella cited a slump in forecasted demand for rare earth oxide (REO) outside of China from 60,000 to 40,000 in 2011 as evidence that prices would continue to retreat from their previous record highs.

Prices have indeed slipped further since the JP Morgan downgrade, and although Molycorp CEO Mark Smith remains upbeat about his company’s prospects, he told Bloomberg in a recent interview that new developers may struggle to cope under the current pricing environment if it persists.

“The debt market is going to be difficult because banks are not going to let the companies use the higher prices we all saw in July and August,” Smith said.

“Equity will also be hard to sell as investors are not going to jump at opportunities to throw money at the rare earth space anymore,” he added.

There could, however, soon be a brief respite for rare earth miners. China’s rare earth export and production quotas for 2012 are due to be released before the end of the year, and analysts expect China will either hold the current caps steady, or reduce them even further.

A National Business Daily report on November 23 cited an industry insider as stating that China’s rare earth export quotas would be capped at 30,000 tonnes in 2012, due to sluggish consumption and international demand, as well as supply from 2011 which had not yet been used up.