As of January 2013, the Land of the Rising Sun will have taken a significant step in chipping away at China’s rare earth sector dominance. 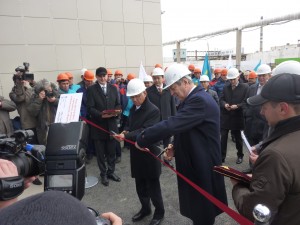 Vladimir Shkolnik, head of Kazatomprom, and Toru Furihata, director and senior managing executive officer of Sumitomo, cut the ribbon at the facility.

Japan has stepped up its efforts to wean itself away from China’s rare earths. And as of next year, the Land of the Rising Sun will have taken a significant step in chipping away at China’s dominance of the sector.

That was the message put forward last week when Japanese trading house Sumitomo (TSE:8053) cut the ribbon on a new plant that will begin manufacturing mixed rare earth carbonate for export to Japan as early as January 2013.

SARECO was established in Kazakhstan in May 2010 to recover rare earth elements (REEs) from uranium-ore residue, and since then it has been preparing to begin operating.

Sumitomo confirmed that the factory’s mixed rare earth carbonate will have high dysprosium and neodymium content — demand for these REEs is expected to rise substantially over the coming years as a result of the rising popularity of hybrid and electric vehicles (EVs).

Another step towards supply independence

The market has watched with increasing interest as Japan has proactively and aggressively sought out means to diversify its rare-earth supply base. Ensuring a stable supply of REEs is considered one of Japan’s top priorities as it aims to promote expansion and sophistication in its high-tech industry.

Last month, Japan announced that it plans to strengthen trade relations with India as it resumes its quest to once again become a contender within the market. Similarly, last week Toyotsu Rare Earth Canada took a step closer to securing its own REE supply by paying Matamec Explorations (TSXV:MAT) for an interest in the company’s Kipawa heavy rare earth element deposit. Toyotsu has also agreed to purchase 100 percent of the company’s mixed rare earth oxide concentrate once the project reaches the production phase.

According to SARECO, the Kazakhstan plant is designed to produce 1,500 tonnes of rare earth oxides (REOs) per year for the first couple of years, rising to 3,000 tonnes in 2015 and up to 5,000 to 6,000 tonnes of REOs by 2017. It also confirmed that SARECO’s main target will be the Japanese market.

In addition, the project aims to enhance its business by developing processing systems that will “isolate individual elements from rare earth mix to produce high-purity products.”

In Kazakhstan, where the economy has grown substantially over the past decade as a result of the development of natural resources including oil, natural gas, uranium and other minerals, REEs are garnering increased support under governmental resource development projects.

While REEs will be the main focus of the facility in the near term, Kazatomprom has stressed that the enterprise will not restrict itself to the production of its primary product — bulk REM concentrate. The company anticipates that an isotope separation process will be established in Kazakhstan by 2015 provided that there is a long-term source for raw material. In the longer term, the company is hoping to use the facility to produce rare-earth metals magnets.

What does this mean for Japan?

With India expected to supply Japan with 4,000 tons of REEs per year on top of Kazakhstan’s 1,500 tonnes, and present global production estimated at 115,000 tons per year (following China’s temporary closure of smelters for November), it is clear that Japan has attached much significance to these commodities.

Add to these factors the supply expected as a result of the deal drawn up between Japanese trading house Sojitz and Lynas Corporation (ASX:LYC), which is expected to result in a minimum 8,500 tonnes of REEs a year for 10 years, and the significance of such deals is further underlined.

Both Japan’s aim of reducing its rare earth dependency and the fact that countries like India are becoming major new sourcing destinations indicate that investors can expect a surge of interest from Japan in exploration and production projects with near- and medium-term potential.