Cheaper, safer and more efficient, magnesium-air fuel cell technology may compete with its hydrogen counterpart as the energy source of the green economy. 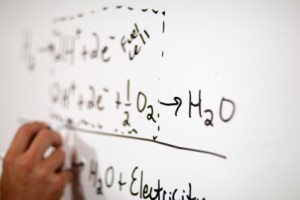 Developing a durable, long-lasting, efficient and lightweight power source has become the Holy Grail for energy industry groups, and hopes are growing that magnesium-air fuel cell technology will meet all of those criteria, levelling or bypassing the potential of hydrogen fuel cells.

MagPower Systems is one company that has faith in the power of magnesium. The Canadian firm has a lock on magnesium-air fuel cell technology, which, as a result of limited energy output caused by hydrogen generation, has never been commercialized until now. By using a gas diffusion cathode and magnesium immersed in an electrolyte, the patented technology generates a direct current.

MagPower argues that the fuel cell has “the electrolyte versatility of using a common saline (salt) solution” while the fuel cell’s performance capabilities can be enhanced by adding the company’s hydrogen inhibitors. Potential markets for the technology, which has an efficiency rate of 90 percent and an operating range of minus 20 to 55 degrees Celsius, include remote military and telecom sites. The fuel cell could also be used as a backup system for electric and solar power companies.

For now, demand for magnesium has remained steady since mid-June, trading in the range of $1.98 and $2.18 per pound during the week of August 16, a level that has not changed since June 26.

Yet with possibilities for the metal opening up, magnesium demand may trend upward. One attraction of magnesium-air fuel cell technology is its relative simplicity and lower cost compared to hydrogen fuel cells. Also, magnesium is less volatile, requires no special fuel storage, is easily recycled and has an indefinite storage life.

Get your INNvestor Report on critical metals investing!

Such qualities have led the US military to consider the value of magnesium-air fuel cell technology. As part of a small business innovation research program, the Navy has mulled the potential of a hybridized magnesium-air fuel cell and nickel–zinc battery or electrochemical capacitor. Reveo, the New York-based company that proposed the idea, believes it may have hit on the ideal energy source for unmanned surface vehicle sensor payloads. The company describes the proposed hybridized magnesium-air fuel cell as “the best choice in terms of specific energy, energy density, fuel loss rate, ease of refueling, system cost and overall safety” and states that the technology can provide 25 kW of pulse power over more than two weeks.

“In addition to military USV [unmanned surface vehicle] applications, the most obvious, the most exciting, and largest market for these will be in electric vehicles or electric boat applications,” Reveo said, adding that “[s]uch technology will be immediately applicable in the marine market to be used as an environment friendly power supply, emergency backup power, and as a power source for communications. These power sources could be used on many types of unmanned and manned surface vehicles supporting many maritime industrial areas including oceanographic survey vessels, offshore oil exploration, salvage ships, the general shipping industry, Coast Guard and the Border Patrol.”

Academics too are interested in the advancement of magnesium fuel cell technology, albeit for more peaceful purposes. Takashi Yabe, a professor at the Tokyo Institute of Technology, has been pushing for greater use of magnesium as a solution to the tension between ever-growing energy needs and the immediate limitations of renewable energy sources. Indeed, Yabe’s commitment to using the 1,800 trillion tons of magnesium contained in sea water to meet the world’s energy needs made him one of Time magazine’s heroes of the environment in 2009. According to Yabe, an automobile with a zinc-air fuel cell achieved a mileage of 600 kilometers in 2003, and a magnesium-air fuel cell would be able to provide three times more energy than that, an amount that makes it 7.5 times more effective than a lithium-ion battery.

Granted, major technology drivers, including the US Department of Energy, still appear to be more focused on developing hydrogen fuel cell technology as a means to ensure greater use of renewable energy. Nonetheless, academic research, corporate investment and public demand will likely continue to drive the development of magnesium-air fuel cell technology, and will make it available on a large scale sooner rather than later.

Get your INNvestor Report on critical metals investing!

2 responses to “Magnesium-Air Fuel Cell May Compete with Hydrogen”