Researchers at the University of California have created an artificial muscle using vanadium dioxide, that is reportedly a thousand times stronger than a human muscle. 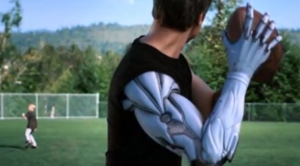 It sounds like something out of The Terminator or The Six Million Dollar Man, but hard science is behind new research into the creation of artificial muscles using vanadium dioxide.
According to American Live Wire, researchers with the U.S. Department of Energy’s Lawrence Berkeley National Laboratory have used vanadium dioxide to create an artificial muscle said to be a thousand times more powerful than a human muscle. The new muscle would be able to throw objects 50 times heavier than itself over five times its length within 60 milliseconds — or the blink of an eye.
Vanadium, which is mostly used to strengthen steel, also has oxide form applications, including vanadium pentoxide used in vanadium flow batteries. Vanadium dioxide is used to produce glass coatings and in simulated jewelry, and is also noted for its ability to change shape, size and physical attributes.
VO2 acts as a metal insulator at low temperatures, giving the material potential in the production of faster and more energy-efficient electronic devices, as Vanadium Investing News reported in October.  When it is heated to 67 degrees Celsius, the compound changes from an insulator to a conductive metal, yielding high-strength properties during the transition.
American Live Wire quotes lead scientist Junqiao Wu explaining how the process works:

The micro-sized artificial muscle was made on a silicon substrate with a V-shaped dual coil of vanadium dioxide and chromium.  Heating the coil allows objects held by the coil to be thrown, or using a proximity sensor causes the coil to push the object away.
The artificial muscle operates on a proximity sensor, similar to biological muscles.  The torsion coil and proximity sensor “allow the device to remotely detect a target and respond by reconfiguring itself to a different shape. This simulates living bodies where neurons sense and deliver stimuli to the muscles and the muscles provide motion.”

Wu further hinted how the “micro muscle” might be used:
“With its combination of power and multi-functionality, our micro-muscle shows great potential for applications that require a high level of functionality integration in a small space.”
Watch a Youtube video on the new artificial muscle below:

How to Invest in Chromium
5 Silver Market Trends to Watch in 2019
5 Highlights from the World Gold Council’s 2018 Demand Trends Report
GFMS Expects Gold to Average US$1,292 in 2019