There is good news and bad news on the research front for vanadium. A new device that absorbs infrared light utilizes vanadium dioxide, but a new kind of flow battery would cut out vanadium pentoxide as an input material. 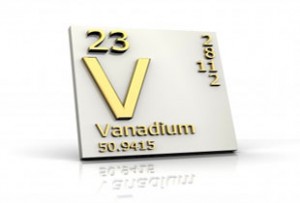 Two recent scientific breakthroughs out of Harvard University could have an impact on the vanadium market, although it is likely too early to pinpoint the specific effects they may have. One of the discoveries involves the use of vanadium dioxide (VO2) in a device that absorbs infrared light, while the other entails research into a new storage battery that does not require vanadium pentoxide, which is typically used in vanadium redox flow batteries.

Let there be no light

At the Harvard School of Engineering and Applied Sciences (SEAS), researchers have invented a new device that absorbs 99.75 percent of the infrared light that shines on it. Composed of a 180-nanometer-thick layer of VO2 on top of a sheet of sapphire, the device, when activated, appears black to infrared cameras.

The school put out a press release on November 26 announcing that “this perfect absorber is ultrathin, tunable, and exceptionally well suited for use in a range of infrared optical devices.”

These could include bolometers (thermal imaging devices) with tunable absorption, spectroscopy devices, tunable filters, thermal emitters, radiation detectors and equipment for energy harvesting, according to Harvard.

“Our structure uses a highly unusual approach, with better results,” said Frederico Capasso, principal investigator. “We exploit a kind of naturally disordered metamaterial, along with thin-film interference effects, to achieve one of the highest absorption rates we’ve ever seen. Yet our perfect absorber is structurally simpler than anything tried before, which is important for many device applications.”

The researchers explained that as an insulating material, vanadium dioxide is not a good conductor of electricity. But when the VO2 is brought from room temperature to about 68 degrees Celsius, it becomes ideal for absorbing infrared light.

“It’s a very complex and rich microstructure in terms of its electronic properties, and it has very unusual optical properties,” said Shriram Ramanathan, an SEAS associate professor of materials science and one of the authors of the study on the device that appeared in the journal Applied Physics Letters.

A new kind of flow battery

Vanadium redox flow batteries have huge potential to capture the lucrative energy storage market, but the batteries are expensive to develop on account of the high input cost of the vanadium needed to produce them.

Vanadium Investing News noted back in August that the batteries — which employ vanadium pentoxide and are large, liquid-filled tanks used to store energy for power grids — could capture a fifth of the grid storage market by 2017, but only if the price of vanadium per kilowatt hour (kwh) drops to $750/kwh from the current $1,250/kwh.

The price of vanadium is important because vanadium electrolytes account for about a third of the cost of the materials and components used to develop a vanadium flow battery.

Researchers at the SEAS were given a grant to tackle this problem by developing a new type of storage battery that employs “small organic molecules” rather than vanadium.

The “flow battery… offers the prospect of cost-effective, grid-scale electrical energy storage based on eco-friendly small organic molecules,” reads a press release issued by the school on November 28.

Lead investigator Michael Aziz said the batteries have the potential to store large amounts of energy from renewable sources such as wind and photovoltaics and could eventually bite into fossil fuels, which remain the world’s chief energy source due to their cheap cost.

“Currently no cost-effective solution exists to this large-scale storage problem,” he stated. “Flow batteries may make stationary storage viable in the marketplace, and that will enable wind and solar to displace a lot more fossil fuel.”

The batteries are considered favorable to solid-electrode batteries like the ones found in cars and mobile devices — which are impractical for storing intermittent wind and solar energy — and vanadium redox flow batteries, which as noted above, have limited commercial value due to the high cost of vanadium.

“We think our particular approach could have advantages over other flow batteries, such as higher power density, high efficiency, inexpensive chemicals, and a safer type of energy storage,” said Aziz, adding that the batteries could be outfitted in a house or office for small-scale energy storage or at wind/solar farms for large-scale storage.

Harvard said the researchers are collaborating with Sustainable Innovations, a commercial electrochemical system developer, so vanadium investors should keep an eye on this technology to determine whether it becomes commercially viable. Until then, vanadium redox flow batteries continue to have big potential in the renewable energy storage space, with about $5.4 billion in potential revenue, according to a Lux Research study released this past summer.

It is also important to recognize that most of the vanadium currently produced is used to strengthen steel, and demand is rising from emerging markets. Even without factoring in new applications, demand for vanadium is expected to more than double by 2025 to 123,000 tons.