The Investing News Networks looks at what happened in the lithium and cobalt sectors in the month of September.

In September, cobalt and lithium continued to make news headlines around the world. Here, the Investing News Network looks at the major events, announcements and developments in the battery metals space.

In the cobalt sector, the Democratic Republic of Congo (DRC), the world’s top producer, took centre stage again, after the country’s Mines Minister said the new mining code cannot be called into question. Investors that have been following the news know the new legislation has been fiercely opposed by international miners as it increases taxes and royalties.

President Joseph Kabila also urged miners to implement the code and said he plans to create special economic zones for companies that manufacture goods from the country’s minerals.

Later in the month, a government official said the DRC expects to issue a decree identifying cobalt as a strategic metal by the end of October. What does that mean? The new category will basically hike royalty taxes to 10 percent.

Looking over to prices, cobalt prices have been falling since April although according to some experts we started to see a bit of a rebound in September. INN talked to Benchmark Mineral Intelligence Analyst Caspar Rawles who said that the reality is that the supply-demand fundamentals haven’t changed and falling prices show that the cobalt market can be sentiment driven as much as it is by supply and demand. 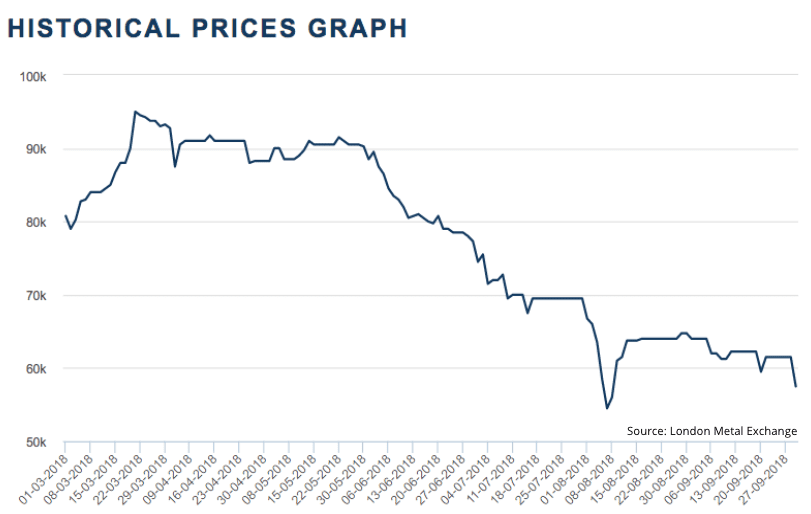 In the lithium sector, Chilean lithium miner SQM (NYSE:SQM) and Australia’s Kidman Resources (ASX:KDR) are facing a legal hurdle at their Mt Holland lithium project after a court in Perth recommended that WA’s mining ministry should not approve an exemption from past minimum exploration-expenditure obligations.

The move could slow down the project’s ramp-up, but it’s worth noting that the recommendation is not binding and that both companies have said they are firmly committed to the lithium project

Last month, Chinese top lithium producer Ganfeng Lithium (SHE:002460) signed a deal to supply lithium hydroxide products for Tesla’s (NASDAQ:TSLA) batteries from 2018 to 2020, but the deal could be extended by three years.

During September, the company also announced a deal with BMW (ETR:BMW) to supply as much lithium as the German automaker might require for 5 years, as electric car makers continue to look for ways to lock in long-term supply of the metal.

The Chinese lithium producer also signed a deal with Korean battery maker LG Chem (KRX:051910) to almost double its supply of battery materials from 2019 to 2025.

Just days before the month ended, Ganfeng also announced it is seeking to raise US$678 million in its Hong Kong IPO and has secured six cornerstone investors including Samsung SDI (KRX:006400) and LG Chem.

A few other developments in the space include:

Editorial Disclosure: Cypress Development and Neo Lithium are clients of the Investing News Network. This article is not paid-for content.