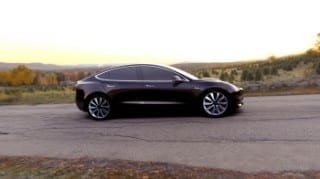 The Investing News Network reached out to Simon Moores of Benchmark Mineral Intelligence to talk about what all of the excitement over the Tesla Model 3 means for lithium investors.

Tesla Motors (NASDAQ:TSLA) unveiled its Model 3 sedan last week, and as expected the latest creation from the electric vehicle maker is getting plenty of attention.
Pre-orders for the car hit nearly 200,000 in a little over 24 hours (potential customers must pay $1,000 to reserve a vehicle). That’s making things look pretty good in terms of Elon Musk’s dream of bringing electric vehicle transport to the masses.
“It’s very important to accelerate the transition to sustainable transport,” Musk said at Thursday night’s unveiling. “This is really important for the future of the world.”
The roomy sedan features a range of over 200 miles, all-wheel drive and a price point of $35,000 before government incentives. Tesla expects to begin production for the Model 3 in late 2017, ultimately ramping up production to 500,000 vehicles per year.

Give me my free report!
All of that might have some lithium investors wondering what the Model 3 means for the critical metals market. Of course, all of those vehicles are going to need lithium-ion batteries, which will be made at the lithium-ion battery gigafactory that critical metals investors have been so excited about.
The Investing News Network reached out to Simon Moores of Benchmark Mineral Intelligence on Friday to ask about what all of the fuss over the Model 3 means for the lithium market and lithium investors. While Tesla is certainly far from the only player in terms of lithium demand (several other companies are planning lithium-ion battery megafactories of their own), Moores stated that pre-orders for the Model 3 could still impact lithium hydroxide demand.
Here’s more of what he had to say.
INN: Were you expecting this much excitement over the Model 3?
SM: I actually thought there was more build up to the Powerwall, but maybe that’s just from my London perspective.
It makes sense that this car is hyped and there is a buzz — this is the world’s most important electric car to date. No question.
I expect the Model 3 to be the true successor to the Toyota Prius.
INN: What could all of this excitement over the Model 3 mean for lithium demand?
SM: With pre-orders at nearly 200,000 in 24 hours, it could do a lot for lithium demand.
The question is all about the batteries now for Tesla. They need to learn how to build low-cost lithium-ion batteries at scale. So getting the gigafactory up and running and securing the supply of lithium, graphite and cobalt is crucial.
Demand is no longer an issue in this market. Raw material supply security is now the critical factor.
INN: At the same time, in light of other megafactory projects coming online, how much of a difference will demand for the Model 3 really make for in terms of global lithium demand?
SM: At the moment, the pre-orders will increase demand for lithium hydroxide by 20 to 30 percent. That’s pretty significant considering this is just one product.
The numbers are still rising as well. Tesla has always believed they will need more than one gigafactory in near future. That belief appears to be founded. Now it’s a question of execution for the company — they need to deliver.
INN: What do you think this excitement over the Model 3 says about interest in the electric vehicle space overall?
SM: It shows that full electric vehicles are here to stay.
It’s important to note that the costs and performance specs that Tesla outlined are the worst-case scenario.
When customers start receiving their Model 3 orders — most of which will be fulfilled in 2018 — the batteries will be better and cheaper.

Give me my free report!
Don’t forget to follow us @INN_Lithium for more updates!

3 responses to “Tesla's Model 3: What Does it Mean for Lithium Investors?”