Standard Lithium Ltd. (“Standard Lithium” or the “Company”) (TSXV:SLL, OTCQX:STLHF, FRA:S5L) an innovative technology and lithium development company, is pleased to announce the successful installation of the Company’s industrial-scale Direct Lithium Extraction Demonstration Plant at Lanxess’ South Plant facility in southern Arkansas (the “Site”).  Standard Lithium’s project team has also installed the site office/control room, the lithium-specific analytical laboratory, and a steel-framed, all-weather structure that allows year-round operation.  The project team is currently completing all utility/service connections, as well as brine and reagent supply and disposal lines.  As soon as these connections are finalised, then Standard Lithium’s 20+ person on-site project team will commence the commissioning phase.

Standard Lithium CEO, Robert Mintak commented, “The commissioning of our industrial-scale pre-commercial plant will solidify Standard Lithium as one of the most advanced lithium projects in North America.  Our recently completed Preliminary Economic Assessment contemplates the production of 20,900 tonnes of battery-quality lithium carbonate from existing brine flow, roughly five times the current domestic U.S. production, and that is without drilling a new well.  The successful commissioning and operation of the LiSTR extraction technology will provide the proof of concept required for a commercial build decision and then potentially to become the largest producer of lithium chemicals in the United States.”

Standard Lithium’s proprietary LiSTR Direct Lithium Extraction technology will be used to extract lithium from waste brine (tail brine) that is a byproduct of existing bromine production facilities run by Lanxess in south Arkansas, to produce battery-quality lithium chemicals.  The industrial-scale pre-commercial plant is designed to continuously process an input tail brine flow of 50 gallons per minute (gpm; or 11.4 m3/hr) from the Lanxess South Plant, which is equivalent to an annual production of between 100-150 tonnes per annum of Lithium Carbonate.

KEY FEATURES OF THIS DISRUPTIVE TECHNOLOGY

Dr. Andy Robinson, Standard Lithium President and COO, commented, “The entire Standard Lithium team continues to deliver a very high-quality product on schedule.  We’re now in the final stages of installation and connection, and about to enter the commissioning phase.  We have a full complement of staff on site ready to start commissioning, overseen by our site manager, Mr. Bruce Seitz.  This is an exciting time for Standard Lithium as we rapidly execute our near-term goal of demonstrating that lithium can be efficiently extracted, at an industrial scale, from Lanxess’ tail-brine in Southern Arkansas.”

Work at the project location at Lanxess’ South Plant facility in southern Arkansas continues to be on-schedule, with first commissioning works expected to start in early December, and full commissioning to happen soon afterward.  The final configuration of the installed modules is shown in Figure 1 below, and an overview of the all-weather enclosure is shown in Figure 2. 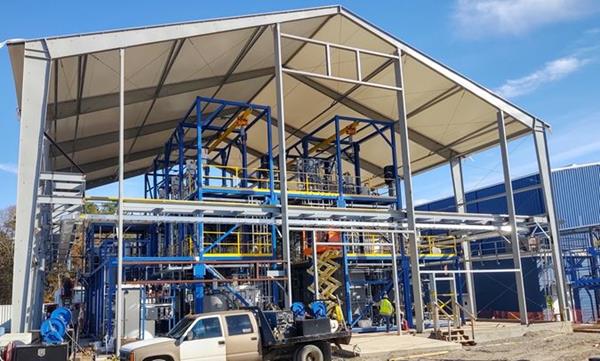 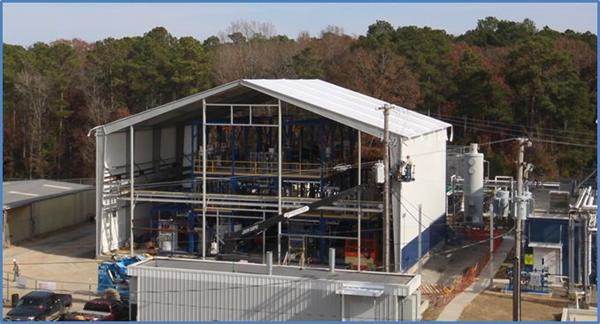 About Standard Lithium Ltd.
Standard Lithium (TSXV:SLL) is a specialty chemical company focused on unlocking the value of existing large-scale US based lithium-brine resources.  The Company believes new lithium production can be brought on stream rapidly by minimizing project risks at selection stage (resource, political, geographic, regulatory & permitting), and by leveraging advances in lithium extraction technologies and processes.  The Company’s flagship project is located in southern Arkansas, where it is engaged in the testing and proving of the commercial viability of lithium extraction from over 150,000 acres of permitted brine operations.  The Company is currently installing a first-of-its-kind Demonstration Plant that will use the Company’s proprietary technology to selectively extract lithium from LANXESS’ tailbrine.  This Demonstration Plant will be used to prove commercial feasibility.  The environmentally friendly process eliminates the use of evaporation ponds, reduces processing time from months to hours and greatly increases the effective recovery of lithium.

Neither TSX Venture Exchange nor its Regulation Services Provider (as that term is defined in policies of the TSX Venture Exchange) accepts responsibility for the adequacy or accuracy of this release.  This news release may contain certain “Forward-Looking Statements” within the meaning of the United States Private Securities Litigation Reform Act of 1995 and applicable Canadian securities laws. When used in this news release, the words “anticipate”, “believe”, “estimate”, “expect”, “target, “plan”, “forecast”, “may”, “schedule” and other similar words or expressions identify forward-looking statements or information.  These forward-looking statements or information may relate to future prices of commodities, accuracy of mineral or resource exploration activity, reserves or resources, regulatory or government requirements or approvals, the reliability of third party information, continued access to mineral properties or infrastructure, fluctuations in the market for lithium and its derivatives, changes in exploration costs and government regulation in Canada and the United States, and other factors or information.  Such statements represent the Company’s current views with respect to future events and are necessarily based upon a number of assumptions and estimates that, while considered reasonable by the Company, are inherently subject to significant business, economic, competitive, political and social risks, contingencies and uncertainties.  Many factors, both known and unknown, could cause results, performance or achievements to be materially different from the results, performance or achievements that are or may be expressed or implied by such forward-looking statements.  The Company does not intend, and does not assume any obligation, to update these forward-looking statements or information to reflect changes in assumptions or changes in circumstances or any other events affections such statements and information other than as required by applicable laws, rules and regulations.

Click here to connect with Standard Lithium Ltd. (TSXV:SLL,OTC:STLHF,FWB:S5L.F) for an Investor Presentation.