Samples obtained at the Eagle Pegmatite returned significant lithium values, with many returning greater than 1000 ppm Li.  Phase two assay results from the Eagle Pegmatite are outlined in the following table. All samples were analyzed for lithium (lithium oxide), and other elements including Cesium (Cs), Rubidium (Rb) and Tantalum (Ta): 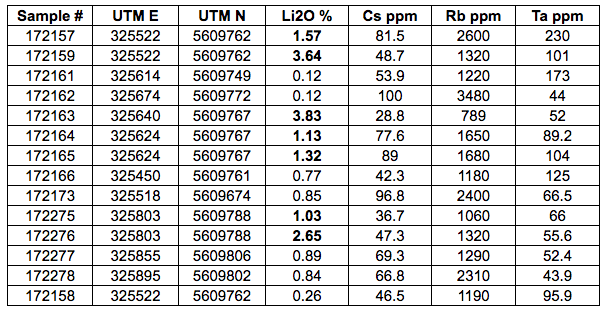 Phase one sampling results from the Lithium Two Project, as reported in the Company news release of August 16, 2018, included values from 0.5% to 2.9% Li2O at the Eagle Pegmatite, and 0.9% to 3.3% Li2O at the FD5 Pegmatite.  In addition, a high-purity spodumene blade sample from FD5 assayed at 7.62% Li2O.  Upcoming drilling will focus on both the Eagle and FD5 Pegmatites at the Lithium Two project.  Permits are in process with the Government of Manitoba and are expected in the coming weeks.

“The 2018 exploration program has generated important and positive data,” said Alex Klenman, president & CEO. “First and foremost, the lithium values obtained at both the Eagle and FD5 Pegmatites over the summer and fall are significant. The data we have now reinforces a compelling case that not only supports the potential of the historical resource, but also leads us right into a far more targeted drill program.  With the Exploration Agreement now signed with the Sagkeeng First Nation, we’re excited to get to the next phase of exploration and drill test these targets,” continued Mr. Klenman.

In July, Azincourt’s JV partner, New Age Metals, entered into an agreement with Grid Metals (formerly Mustang Minerals) for the rights to explore for lithium and other elements on the claim directly adjacent to the west of the Lithium Two Project as part of the current NAM-AAZ JV portfolio.

In geological terms, the pegmatites encountered on the Lithium Two Project are LCT Type (Lithium-Cesium-Tantalum) Pegmatites and are in the Albite-Spodumene Subgroup. Spodumene is expressed in the pegmatites as small green blades up to 3 centimeters in length. The Eagle Pegmatite is a west-northwest to west-striking, vertically dipping, lenticular pegmatite dyke intruded into mafic volcanics. The widths of the pegmatite have been measured to be between 2 to 10 meters.  The Eagle Pegmatite system appears to be a swarm of closely spaced pegmatites bodies.

All samples were analyzed at the Activation Laboratories facility, in Ancaster, Ontario. Samples were prepared, using the lab’s Code RX1 procedure. Samples are crushed, up to 95% passing through a 10 mesh, riffle split, and then pulverized, with mild steel, to 95%, passing 105 μm. Analyses were completed, using the lab’s Ultratrace 7 Package; a Sodium Peroxide Fusion which allows for total metal recovery and is effective for analysis of Sulphides and refractory minerals. Assay analyses are carried out, using ICP‐OES and ICP‐MS instrumentation. New Age Metals implemented a QA/QC field program with insertion of blanks at regular intervals. Activation Laboratories has their own internal QA/QC procedures that it carries out for all sample batches.

The pegmatites in this region of southeast Manitoba are described as being a part of the Winnipeg River Pegmatite Field. Several large lithium-bearing pegmatites exist in this region and exploration activity in the region is increasing. This pegmatite field is host to the world-class Tanco Pegmatite, which is a highly fractionated Lithium-Cesium-Tantalum (LCT Type) pegmatite and has been mined in varying capacities since 1969. The LCT-type pegmatites can contain large amounts of spodumene (one of the primary ores used in hard rock lithium extraction) and are a primary geological target in hard rock lithium exploration. They also can contain economic qualities of tantalum and cesium as well as other lithium bearing minerals such as mica.  With eight projects totalling over 14,000 hectares containing hundreds of pegmatites, the Azincourt-New Age JV is the largest claim holder for Lithium Projects in the Winnipeg River Pegmatite Field, southeast Manitoba, Canada.

The contents contained herein that relate to Exploration Results or Mineral Resources is based on information compiled, reviewed or prepared by Carey Galeschuk, a consulting geoscientist for New Age Metals.  Mr. Galeschuk is the Qualified Person as defined by National Instrument 43-101 and has reviewed and approved the technical content of this news release.

Azincourt Energy is a Canadian-based resource company specializing in the strategic acquisition, exploration and development of alternative energy/fuel projects, including uranium, lithium, and other elements critical to the future.