Graphite Investing News asked Aubrey Eveleigh, Zenyatta’s CEO, to clarify the geology of the Albany discovery and how the company plans to process the graphite to nearly 100-percent purity. 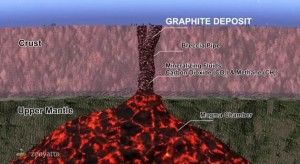 Graphite Investing News (GIN) recently published a video interview with Mickey Fulp of www.mercenarygeologist.com in which Fulp explains to investors the criteria he uses to evaluate a graphite deposit. In the interview, Fulp mentions three companies in the graphite sector, including Zenyatta Ventures (TSXV:ZEN), which is developing a graphite deposit in Ontario, Canada.

In the interview below, INN Senior Editor Andrew Topf asks Aubrey Eveleigh, Zenyatta’s CEO, to clarify the geology of the Albany discovery and how the company plans to process the graphite to nearly 100-percent purity.

GIN: On your website you describe the Albany deposit as a “vein-type graphite breccia.” How is this deposit different from other graphite deposits that have been found in the world?

Aubrey Eveleigh: What we’ve discovered is a hydrothermal, or a vein style. We prefer to use hydrothermal because vein suggests a smaller body when in fact what we have is a large breccia pipe with intersections of 200 to 300 meters. We’ve been referring to it as hydrothermal. That’s volcanic in origin, derived from the upper mantle of the earth, whereas flake or amorphous is sedimentary in origin. It’s derived from organic material. It’s a totally different style, formed differently, a totally different geological deposit.

GIN: Can you also distinguish between this deposit and Sri Lankan vein graphite, which your deposit has often been compared to?

AE: The Sri Lankan is formed in the same manner, it is hydrothermal, but they refer to it as “vein style.” It is volcanic in nature, except the Sri Lankan vein is very narrow; they’re mining a vein that is 5 to 10 centimeters wide, whereas what we’ve intersected is 200 to 300 meters wide.

AE: It’s a different size. We have a breccia, they have strictly a vein. Now we do have some veins in the system, but for the most part it’s a breccia pipe. So think of it like a kimberlite pipe where you find diamonds. They come from the upper mantle. It’s much like that.

GIN: You say that the vein is ultra-high purity at 99.96-percent carbon, but the drill results only show 5 to 7 percent carbon; how do you account for that discrepancy?

AE: It’s not a discrepancy. When you drill and you test for the grade, it comes out at 5 percent because what you’re testing is all the material in here. You cut it, you sample it, you send it in for analysis and you’re also diluting it with the granitic clasts that are in the breccia pipe. The key is not the grade on the front end, it’s the purity on the back end. When we put that through a metallurgical test, and we’ve done this on several occasions at SGS Lakefield, we put in the 5-percent grade, we grind and we do a flotation and a caustic bake. A caustic bake is sodium hydroxide. It’s not an acid as some people are suggesting; it’s sodium hydroxide, 25 percent by weight, and we can recycle that material. After you go through that process it comes out at 99.99 percent. What I’ve been told is that we’re the only company globally that can use caustic bake to get to 99.99 percent. I’m getting it third hand from a good source and we haven’t confirmed that, but I’ve been told that.

GIN: I’ve been told by geologists that graphite can be easily purified using acid leaching. Is that not true?

AE: Yes. You can upgrade flake thermally and with acid. It’s a little more expensive. When somebody says that they can do that I would simply ask, “what is the cost?” We know from our processing that we can do it with a caustic bake fairly cheaply.

GIN: You released some beneficiation test results in April that show that high-purity graphite can be produced using the caustic baking leach process. Can you describe that process in a little more detail? Secondly, do you have any estimates as to the cost? You mentioned that acid leaching is expensive; so do you have any cost numbers you can share with us?

AE: When a flake graphite deposit talks about leaching, they’re usually using hydrofluoric acid. Now, we don’t use that — hydrofluoric acid is a pretty dangerous material and it’s very expensive. That’s related to the infrastructure that you have to set up because you have to set up an entire safety infrastructure. In our case, we’re using sodium hydroxide. It’s safer. It’s a base, not an acid. We use 25 percent by weight, and we can recycle the material. It’s much cheaper and obviously we’ve got extremely high grades from it, and with good recoveries.

GIN: Are you able to compare it? Like you say, it’s cheaper, but how much cheaper? Can you give us an indication?

AE: I can’t throw numbers because we haven’t done a prefeasibility or an economic assessment yet. As you know, the Ontario Securities Commission does not allow us to talk about economics and numbers without going through that process.

GIN: Fair enough. Your critics have said that the graphite at Albany can’t compete with synthetic graphite which, as you know, commands the highest price per tonne. How do you respond to that criticism?

AE: I don’t know what they’re talking about exactly, which application?

GIN: On your website you say you can compete with synthetic graphite, but that has been questioned, so I just wondered what your response to that criticism is.

AE: The first thing you’ve got to do when you have a graphite deposit is determine the purity. That’s the first step. We’ve determined the purity and it’s extremely high grade, high purity; we can get to 99.99. The next step is to determine the properties of the graphite, which we’re doing right now. We’re actually doing it in a couple of universities in Canada, and we should have that information in the following weeks. Depending on the specs of your graphite, it will go into various applications, and that’s yet to be determined. But for someone to say now, without knowing what the specs of our graphite is, that it couldn’t be applied to high-purity synthetic applications is wrong. How do they know that? On what basis are they saying that?

GIN: I think the criticism has been over this percentage issue, of whether you’re able to actually bring it up to the purity that you’re suggesting.

AE: We’ve proven that. I mean that was already proven by SGS Lakefield. Why would somebody question that? We’ve already released that information.

GIN: If you listen to the interview with Mickey Fulp, that was questioned.

AE: Yes, but I don’t think you should take that as gospel. There were so many wrongs in that interview — I’m here to correct that. For one, he referred to our deposit as amorphous, which is totally wrong. It’s a sedimentary process; we’re volcanic and hydrothermal. The other thing that was said in that interview is that we use acid. That’s totally wrong. We don’t use acid. It’s a base, sodium hydroxide. The other thing I think he said was it’s “infrastructurally challenged.” Anybody that goes around the world to look at mining projects would find that the infrastructure that’s around us is probably some of the best you can find. You can see that on our website and in our presentation.

GIN: As a reminder, and in brief, where are you in terms of access to rail and power?

GIN: Talking about the stock price now, Zenyatta has enjoyed a really great run in its stock price: almost a 700-percent gain from a year ago, and it was named Ontario’s Discovery of the Year. But I also notice that there aren’t any analysts covering the stock. Why do you think that is?

AE: We’ve talked to many analysts. There’s one analyst that does cover it in the US. A lot of these companies are looking for the 43-101 resource and they’re waiting for that. We should be able to deliver that in September, October. So a lot of people are waiting for that next catalyst, which is a very important step. People look at it now and say, “yes, you can come up with the purity and the quality looks good. You still have to do some steps there, but how big is this thing?” That’s what everybody is asking right now. We’ll deliver that very soon. You saw probably a few days ago, we announced we’re bringing on the engineering firm RPA, which is a highly qualified independent firm, to look at the data and determine a resource estimate for September or October.

GIN: On a more personal level, reading the comments from our video, you’ve obviously got some passionate and committed followers. Do you feel some personal responsibility to those people to keep the good news going?

AE: Absolutely. I’m in management, I’m the president and CEO. I simply work for the shareholders; they’re all part owners of this company, and of course I feel a responsibility. That’s my job. We all have to work hard to make sure we realize the maximum value for the shareholders, and that’s what we’re doing. The shareholders of any company are passionate; the reason they own it and buy it is that they love it. Otherwise they wouldn’t be there. I would expect anybody that owns a stock to be passionate about it.

GIN: Absolutely. Just on a concluding note, what are your plans for the rest of the year?

AE: As you know, we’re drilling presently until the end of August. At that point, that’s when RPA will start to do their estimate on the size. Shortly after the resource is out we’re going to start our preliminary economic assessment (PEA) and that will be out the first quarter of 2014. In the meantime, we’ll continue to work on the properties of the graphite crystals. We’ll be touring various downstream companies to the site and we’ll be signing confidentiality agreements with various downstream companies as well. We’re also going to be doing another metallurgical test. We’ll scale it up and do a bulk sample and we’ll be testing that as well.

GIN: It sounds like you’ve got a busy year ahead of you.

AE: It is busy. We’re fully financed, all the warrants have been exercised. We have $10 million in the bank and our program costs about $7 million, so we should still have some money left over at the end of the PEA.

GIN: Excellent. I really appreciate you taking the time to talk about your deposit and get some clarity on it. Thanks a lot.

* Editing Note: An earlier version of this article incorrectly referred to the use of hydrochloric acid in acid leaching. The correct term is hydrofluoric acid. GIN regrets the error.

Mickey Fulp on What Makes a Good Graphite Deposit