New York Governor announces grants and funding of US$13.25m for Stage 1 production at a press conference earlier today Stage 1 production capacity 3GWh to be ready in second half of 2019 at Huron Campus with Capex of US$130m Detailed Engineering for 3GWh production facility to shortly commence with experienced production team assembled Financing discussions … Continued

Magnis Resources (ASX:MNS) is pleased to announce that Imperium3 NY, part of the global consortium, in which Magnis is a one third owner, has received funding totalling US$13.25m for Stage 1 production at the New York State Lithium-ion Gigafactory to be located at Huron Campus in Upper State New York.
The announcement was made earlier today by the Governor of New York Andrew Cuomo at a press conference held at the location of the New York Lithium-ion battery gigafactory, Huron Campus.
Magnis’ Chairman Frank Poullas commented: “Today’s announcement is a significant milestone for the New York consortium and more specifically for Magnis’ shareholders, as progress is made one step closer towards Lithium-ion battery production at the Huron Campus.”
“To have the support of the Governor Cuomo and his Government after an extensive due diligence process shows the true merits of this project. New York State accounts for approximately 10% of the GDP for the whole of the United States with an economy that has a larger GDP than countries including Australia and South Korea.”
“Through the consortium and partners, we have the technology, skills and resources to make New York’s first Lithium-ion Battery Gigafactory a huge success. We would like to thank the New York State Government for its ongoing support.”
New York Gigafactory A Joint Manufacturing Establishment Agreement was signed for a 15GWh lithium-ion battery plant as announced on 22 May 2017. The agreement was signed by Magnis, Charge CCCV (C4V), Boston Energy and Innovation, C&D Assembly and Primet Precision Materials.
Over 25 international companies are undergoing qualification process as strategic suppliers of critical ingredients for Lithium-ion battery cells including raw materials, electrolyte and separator.
The recent completion of the scoping study priced the capital costs for Stage 1 at US$130m, with an expected first production date in the second half of 2019. First stage production will be at 3GWh with an aggressive ramp up to 15GWh.
The detailed engineering contract for stage 1 is expected in the current quarter with groups shortlisted all having extensive experience in the Lithium-ion battery industry.
Battery Production
Using its innovative technology and industry experts, the batteries to be produced by the consortium have been qualified as safer, more efficient and less expensive. The consortium is currently producing batteries in a Megawatt scale facility, mainly for product evaluation, supplier qualification and system level performance validations. 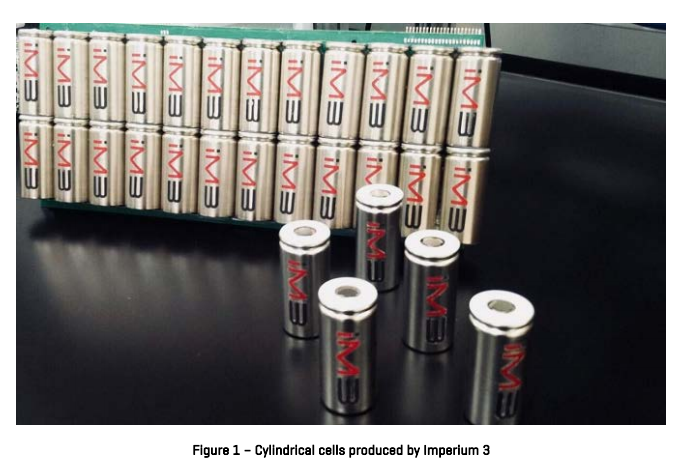 An experienced team has been assembled to lead the project with key members having previous experience working in the production of Lithium-ion batteries for one of the global leaders from Korea and an Auto manufacturer from the US.
The general market for Lithium-ion batteries continues to grow rapidly with announcements by current and future end-users being made on a regular basis. The target markets identified for Stage 1 production following end user discussions include Electric Vehicles, Stationary Energy Storage, consumer electronics and niche products. Under the 50by30 program, New York’s utilities and other electricity suppliers are required to obtain 50% of New York’s electricity from renewables, which would require many GWh of annual storage to make it possible and this gigafactory will play a large role in meeting New York State’s internal demand and allowing them to achieve this goal.
Financing and Offtake
Today’s announcement also builds on the significant work being done by the consortium in New York State with funding and offtakes.
Receiving the support from the New York State Government is a key milestone for financing the project. Discussions have been very positive to date on the remainder of the funding and these discussions will continue with Magnis updating the market accordingly. A signed term sheet is expected in the current quarter with serious interest being received in the US.
Offtake discussions are nearing completion with a high demand coming from global market including stationary storage and electric mobility.
The New York State Government Press Release can be found here: https://www.governor.ny.gov/news/governor-cuomo-announces-imperium3-new-york-establish-lithiumion-battery-giga-factory-southern
The press conference can be viewed here: http://www.wbng.com/story/36520211/gov-cuomo-endicott-battery-factory-to-create-more-than-230- job
Frank Poullas Chairman
Magnis Resources Limited
Ph: +61 2 8397 9888
www.magnis.com.au
Click here to connect with Magnis Resources (ASX:MNS) to receive an Investor Presentation.