The electric bus traveled 1,101.2 miles this month with 660 kWh of energy storage capacity. It was powered by a new lithium-ion battery cell.

An electric bus from Proterra that is powered by a new lithium-ion battery cell hit a world distance record, the company said on Tuesday (September 19).
Proterra’s 40-foot Catalyst E2 max traveled 1,101.2 miles this month with 660 kWh of energy storage capacity.
The company developed the lithium-ion batteries used in the bus together with LG Chem (KRX:051910). The E2 battery packs will be produced in Burlingame, California, where the US manufacturer expects to reach over 500 MWh on an annual basis.

Give me my free report!
Last year, the company sold 190 buses and is on track to “far exceed” that amount this year, said Matt Horton, Proterra’s chief commercial officer. However, while the company has been working to lower costs, the buses are still around $250,000 more expensive than a typical diesel bus.
“Heavy-duty electric transit vehicles now have the capabilities they need. We will be turning our focus even more so to driving the cost down,” he added.
Battery-powered buses are expected to dominate the transit bus market within 10 years, according to Proterra CEO Ryan Popple. In fact, a recent report by IDTechEx Research estimates that hybrid and pure electric buses will power up to be a massive $500-billion market, with many electric vehicle manufacturers expanding from cars to the bus space.

“Electric buses will be the market to watch in terms of adoption,” said Horton. “The transition [to electric] will happen far, far faster than with passenger cars.”
As the electric vehicle revolution unfolds, analysts expect demand for the lithium-ion batteries that power these vehicles to jump from current levels. Investment bank Goldman Sachs (NYSE:GS) estimates that the lithium-ion battery market will be worth $40 billion by 2025 and dominated by China.
The Asian country has considerable focus on the often “overlooked” electric bus sector, Benchmark Mineral Intelligence Managing Director Simon Moores recently told China Daily.
He pointed to China-based battery manufacturer CATL, which plans to expand its cell capacity from 8 GWh to 100 GWh by 2020 to meet expected demand. “The numbers are staggering. But that shows the [increase] needed to supply electric vehicles and buses,” he said.

As the need for batteries increases, demand for key elements such as cobalt are expected to soar. Benchmark Mineral Intelligence reported that cobalt sulfate prices have continued to surge in the past months, propped up by lithium-ion cathode demand and limited refinery supply in China.
The firm says that cobalt metal is different from the cobalt chemicals used in lithium ion-battery cathodes. As the chart below shows, prices for cobalt metal and for cobalt chemicals have performed differently so far this year. 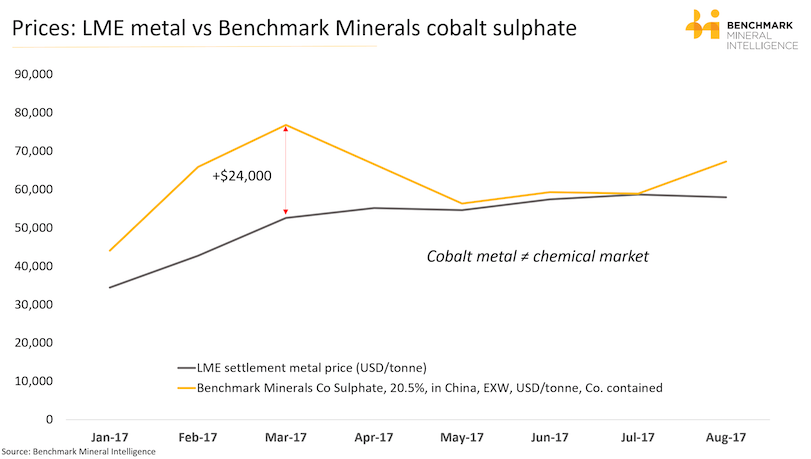 Get free access to expert analysis and market forecasts today.