Cobalt prices trended down in 2018, but what is the cobalt outlook for the year ahead? Analysts share their thoughts here.

This time last year, market watchers expected cobalt, a key element in lithium-ion batteries, to have a strong year ahead.

But in 2018 the battery metal‘s price struggled, pressured by increased supply from the Democratic Republic of Congo (DRC) and market volatility.

With 2018 drawing to a close, the Investing News Network reached out to cobalt experts to get more insight about the metal’s future. Read on to learn what analysts expect in terms of the cobalt outlook next year, from supply and demand to potential price catalysts.

Analysts agree that the main trend the cobalt market experienced in 2018 was declining prices.

“There were some exceptions to the rule, but from the end of Q1 and throughout 2018, we’ve seen prices decreasing and continuing to fall,” said Benchmark Mineral Intelligence analyst Caspar Rawles.

According to Rawles, there are a number of reasons why prices have trended downward in recent months. These include the increase in the price basis of raw material feedstocks from the DRC going into China, and issues around credit availability and cash flowing in China as a result. Macroeconomic factors that led to negative sentiment also played a role.

At the end of last year, Rawles had expected the market to correct, but he was still somewhat surprised by how much of a correction actually happened, particularly in the cobalt chemical industry in China. 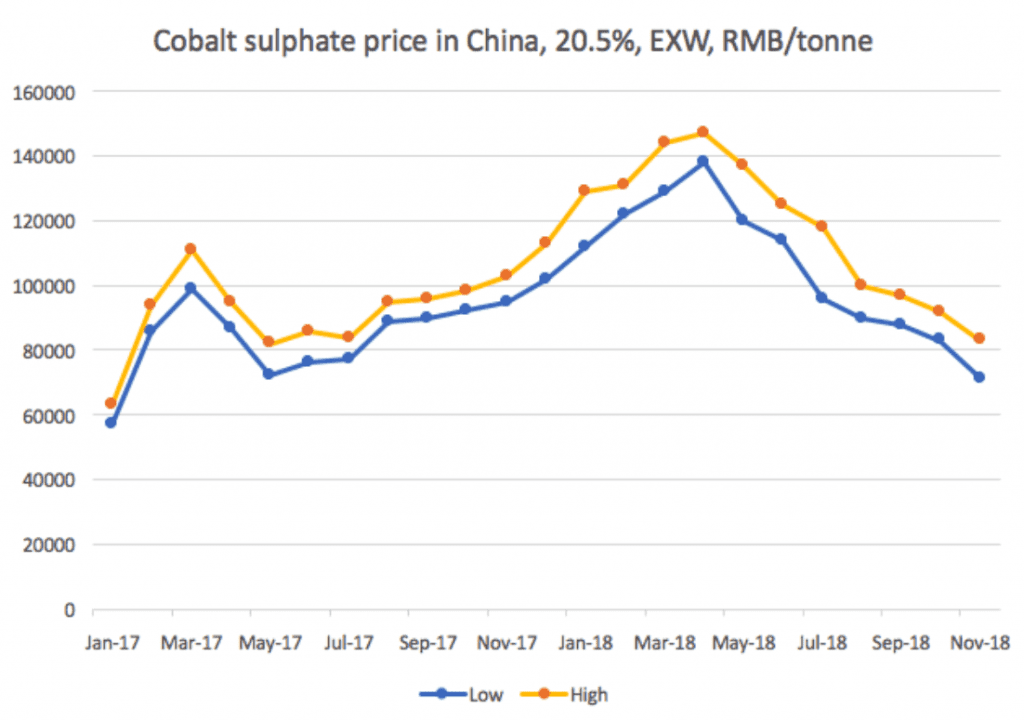 Meanwhile, a year ago Roskill expected prices to remain above a floor level of around US$35 per pound over the period to 2022.

“It appears that US$33 per pound is a more accurate floor price based on current operating conditions,” said Jack Bedder, director at Roskill.

Fastmarkets Head of Research William Adams also mentioned declining prices as a key trend in 2018. “We only started forecasting cobalt prices in May, and our first forecast was for weaker prices, which we have seen,” he said.

Speaking about trends in 2018, Rawles said that one of the biggest challenges in the cobalt sector this year has been that buying hydroxide from the DRC and refining it to chemicals in China has not been economic, as there has been little to no margin in it.

“[That] really caused a problem in the middle part of the supply chain, which was really challenging and was taking a big hit this year. [It] has had an impact on the supply negotiations going into the next year, and even the deals that were already struck had to change to allow small businesses to continue.”

For his part, Bedder said price and payable trends were interesting this past year, as intermediates and chemicals are oversupplied with lots of recent expansion in the DRC and China.

“This has helped push prices down. The metal market is much tighter (especially for certain forms), but there has been more production and destocking in China than was expected in H2 this year,” he added.

“With new supply hitting the market in 2018 and more capacity expected to be brought online in 2019 and beyond, tightness in intermediates has softened and payables fell. Lower hydroxide payables make for lower sulfate production costs, and thus discounts against the metal price,” Bedder said.

The DRC continued to take center stage in 2018, with plenty of news coming from the country where most cobalt is mined. Concerns surrounding its new mining code, which raises taxes and royalties for cobalt to 10 percent, as well as responsible sourcing of the metal and the impact of artisanal mining, were all topics of discussion in the cobalt space.

One of the biggest pieces of news in the cobalt sector this year was the recently announced export sales halt at Katanga Mining’s (TSX:KAT) Kamoto mine.

“As production isn’t affected (just sales) and because there is enough supply of hydroxide at present, it’s not a major issue. But it does serve to highlight how future supply of cobalt feedstock is dependent on the ramp up of a handful of DRC projects,” Bedder said.

Similarly, Rawles said that at the moment the situation is not really going to have an impact on the supply chain, “but as we get into the second half of 2019 I think that possibly might start to show. But that is yet to be seen.”

Another factor that hit the market in 2018 were subsidy changes in China, which acted as a disruption that hit demand for electric vehicles (EVs) and batteries and led to destocking, which were negative for cobalt demand, Adams said.

“But longer term the subsidies are a positive for cobalt demand as the subsidies favor cars with bigger drive ranges, and that will mean using lithium-ion batteries with nickel, cobalt and manganese (NMC) chemistries, rather than the first-generation EV batteries that did not have cobalt in them,” he added.

In 2019, Fastmarkets’ Adams expects the market to move into a supply surplus as Katanga and ERG ramp up production.

Despite forecasting Q1 to be slow given Chinese Lunar New Year and because new-energy vehicle sales tend to be concentrated in the final third of the year, Adams said Q2 is expected to be tight on the back of supply disruptions from Katanga and restraint from other producers due to low prices.

“We expect artisanal supply to drop as well as scrap supply. All the time, however, we expect strong demand — it is just that the supply response in 2018/2019 will be overwhelming,” he added.

Adams explained there may be a shortage in the Q1 or Q2 if Katanga continues to halt exports, but much will depend on whether consumers come in to restock.

“ERG is also ramping up so that will provide extra supply, and we expect other smaller Chinese-owned mines in the DRC to start producing and Panoramic Resources’ (ASX:PAN) Savannah mine in Australia is expected to restart output in Q2 2019,” he said.

Adams added that scrap supply is expected to slow as prices are now less attractive. Low prices may lead to less artisanal supply as well.

For Rawles, there’s enough hydroxide around right now, assuming as well that some of the expansions that are planned continue as expected.

“Demand will continue to grow, consumption of lithium-ion batteries is going to grow, but as of right now there’s enough cobalt around to meet the needs of the market,” he added.

Speaking about demand, Fastmarkets’ Adams said he is very bullish on cobalt demand as the move to NCM battery chemistries and need for EVs with greater drive ranges means bigger batteries and more batteries with cobalt in them.

“We expect strong demand growth in 2019 as the EV sales see organic growth, as more EV models are available and as Chinese subsidies push for more battery EVs rather than plug-in hybrid EVs,” he said.

Further down the road, “it will take a lot of the smaller operations to come onstream in a timely manner to ensure supply keeps up with demand. It is very hard for upstream supply to continuingly grow when demand is set to growth exponentially for a long period of time,” Adams added.

Another important discussion in the market that is set to continue in 2019 is ongoing talks about decreasing cobalt content in batteries after Tesla (NASDAQ:TSLA) announced it is looking to reduce cobalt to almost nothing in its batteries.

“Since the start of the year we’ve noticed in the conversations we’ve been having in the industry less of a push to move to that kind of a holy grail NCM 811 formulation,” said Rawles, adding that there are a number of reasons behind that.

“The key one is cobalt is nowhere near the levels it was at the start of the year,” he said. But some of the factors around pricing in the lithium market have also helped that push become less important, as lithium hydroxide, needed in the 811 formulation, was more expensive than lithium carbonate during part of the year.

In addition, engineering issues that have been a key factor in cathode selection have not been resolved. That said, even though “right now there’s less of a push for 811, we think it will ultimately happen in the future,” Rawles said.

Similarly, Roskill expects shifts in cathode chemistries to impact cobalt demand — but for now, the growth trend is still strong and demand growth will continue at this impressive rate until around 2025.

“While NCM 811 is being introduced, most of the models currently being sold are still using NCM 523, with some use of NCM 622. The shift to higher-nickel NCM is coming, but it won’t happen overnight, said Bedder, stating that Roskill expects the cobalt market to break the 200,000-tonne mark by 2024.

Looking ahead, Roskill expects prices to remain strong in 2019, underpinned by strong demand growth across all major end uses.

Meanwhile, Fastmarkets forecasts an average price of US$28 for 2019, with the first half above the US$30 level. Prices will then drop towards US$25 in the second half.

“The intermediate prices have suffered more than the metal price, as a lot of the new material being produced is intermediate material rather than metal,” Adams said.

Meanwhile, Benchmark’s Rawles expects the market to go through quite a tough period going at the start of 2019, with prices set to continue to fall.

“But at what rate? It is still open for debate, as there are a lot of question marks around certain parts of the industry. I think we will see a bigger proportion of producers putting their material on the spot market, which might have a negative impact on prices as well,” Rawles added.

One of the issues the cobalt market has had this year has been the disparity between prices of cobalt metal against what’s been happening in the chemical market, particularly in China, the expert added.

“As the battery industry grows, that problem will only become more apparent because everyone looks at the metal price — but even now, the cobalt chemical market is far bigger than the cobalt metal market,” Rawles said. Prices in those markets are going to start to play a major role compared to metal prices.

For Bedder, a key factor to watch next year is the development of new capacity. “This includes metal and chemical capacity (mainly in China) and mine projects (most of the big ones are in the DRC),” he said.

“If growth accelerates at a faster pace then there is more chance that battery manufacturers will feel the need to restock, which could lift apparent demand even more than actual demand,” he added.

Adams added that investors should keep an eye out for companies that are well placed in the industry cost curve, and are well financed and well managed.

“[Those companies] will be in a good position to perform strongly in the medium term against our predictions for growing cobalt demand,” he said.