Indonesia is fortunate to be endowed with vast mineral wealth. The country is the world’s second largest producer of tin and nickel and, in 2009, according to the USGS, was the world’s fourth largest copper producer. 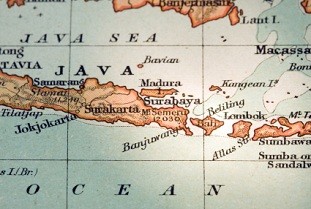 Indonesia is fortunate to be endowed with vast mineral wealth. The country is the world’s second largest producer of tin and nickel and, in 2009, according to the U.S. Geological Survey (USGS), was the world’s fourth largest copper producer. The mining industry accounted for 10.8 percent of Indonesia’s GDP in 2009, with minerals and related products contributing one-fifth of the country’s total exports.

Indonesia’s copper deposits are gold-rich porphyry copper deposits, typical of the islands of Southeast Asia. These gold-rich porphyries are hosted by diorite to quartz-diorite and, to a much lesser degree, more felsic compositions. The deposits are characterized by a strong correlation between the distribution of copper sulfides and native gold, with the gold typically found as very small inclusions in the copper sulfides.

The mining industry in Indonesia is regulated by the Department of Energy and Mineral Resources. In the past, mining in the region has experienced several setbacks due to corruption and protesting, however, over the recent years the ministry has taken measures to clean up the mining business in order to attract more foreign investment. The country’s mining industry is currently undergoing a period of rapid growth. It is estimated that Indonesia will post double-digit growth percentages for the coming years, and is forecasted to reach US $149.8 billion in 2015.  The stars of the show are expected to be coal, copper and gold- which are all predicted to grow 15 percent per year. Output of nickel and tin will lag, however, the growth in coal, copper and gold will more than compensate for the decrease in output.

Most of Indonesia’s copper production comes from two major mines, the Grasberg and the Batu Hijau Copper-Gold Mine. The Grasberg Mine Complex, located in the province of Papua in Indonesia and owned primarily by PT Freeport Indonesia, a subsidiary of Freeport-McMoRan (NYSE:FCX). The property contains the largest recoverable reserves of copper and the largest single gold reserve in the world. Open-pit mining of the Grasberg ore body commenced in 1990 and is expected to continue until mid-2015, at which time underground mining operations will take over. According to Freeport’s website, production is currently at the 3,295- to 4,285-meter elevation level and totaled 49.0 million metric tonnes of ore in 2008 and 57.5 million metric tonnes of ore in 2007. The Grasberg complex includes the 2.7 billion metric tonne Grasberg/Ertsberg minerals district reserves. The western side of the district is dominated by the Grasberg, with its massive open pit and block cave mineable reserves, and the Kucing Liar and Big Gossan ore bodies. The eastern side of the district is dominated by the Ertsberg East ore bodies, the DOZ and the Deep MLZ. These eastern-side ore bodies are accessed by underground mining.

The Batu Hijau open-pit Copper-Gold mine is located on the Sumbawa Island in Indonesia. It is owned by PT Newmont, a subsidiary of Newmont (45%), Nusa Tenggara Mining Corp. (35%), PT Pukuafu Indah (20%).  Like the Grasberg, and most of the gold deposits in Indonesia, it is a gold-rich porphyry copper deposit, and the primary mineralization type is copper sulfides with gold inclusions. The ore grades an average 0.49% copper and 0.39g/t gold. During 2009, Batu Hijau shipped 778 kt of copper concentrate containing 504 M lbs of copper and 557 K oz of gold. In 2009, Newmont Mining reported a dramatic increase in production at the mine. According to the company’s reports, the Batu Hijau mine saw increases in gold and copper production by 87.15 percent and 42.56 percent, respectively, in the first half of 2010 compared to the same period in 2009. The gold production increased to 335,000 ounces in the period ending June 30, 2010 from 179,000 ounces in the same period in 2009. As for the copper, the production increased to 278 million pounds from 195 million pounds. The Batu Hijau mineral deposits were founded in 1990 and the mine started operation in 2000. As of the end of 2009, the Batu Hijau mine’s estimate reserves were 11.47 billion pounds of copper, 11.57 million ounces of gold and 40.97 million ounces of silver.

A sample of miners in Indonesia