As reported on November 22, 2018, Camino has conducted intensified surface exploration at the Chapitos project. Results from the detailed mapping are being compiled and the results of the soil and rock sampling within the Diva trend are discussed below.

CEO John Williamson commented, “We are excited to see the surface results come together and new copper and copper-gold anomalies have been identified through soil and rock sampling results. In particular, we are excited by the extension of the Diva trend northwest of the Adriana Copper Occurrence and await the granting of our new drill permits early in 2019.”

In total, 851 rock samples have been collected and have now delineated a 7km by ~1.5km area that we have named the “Diva trend.” The rock samples were submitted to ALS Global for analysis and their copper results ranged from less than detection up to 15% Cu, with an average of 0.69% Cu. The Diva trend is host to the Lourdes, Adriana, Katty, Maria, Pilar, and Vicky copper occurrences. The Diva trend is open to the northwest and to the southeast and to date less than 20% of this trend has been drill tested (Adriana, Katty, and Vicky occurrences) and the rest remains open. 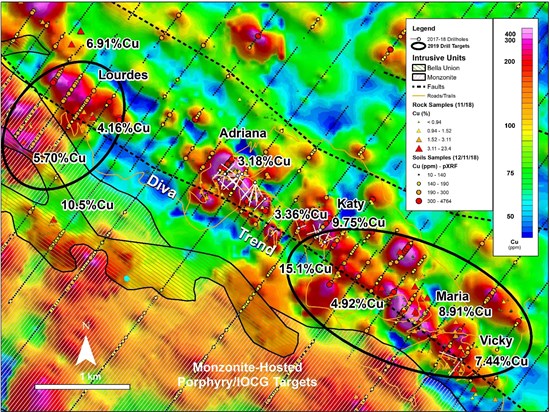 The Diva trend comprises a broad zone of Copper (rock and soil) anomalies (Figure 1) that is parallel/sub-parallel to the northwest trending contact between a Jurassic Volcano-sedimentary sequence (to the north) and a Cretaceous Monzonite Intrusive complex (to the south). The Diva fault, which lies within the Diva trend at or near this volcanic-intrusive contact, and was confirmed by the 2017-2018 Adriana drilling programs, appears to be an important control for copper mineralization and/or surface anomalism along the trend, although additional parallel structures also appear to be present. In addition, several intense zones of silica replacement, referred to as aplitic dykes on regional government maps, are also spatially associated with the Diva fault at, and northwest of, the Adriana area.

Soil sampling was conducted at 25m intervals along northeast trending grid lines with 100-200m line spacing. A total of 2750 soil samples have now been collected along the Diva trend, as illustrated in Figure 1, which comprise an initial group of 1550 samples collected along wide-spaced lines that were analyzed in Chala by the Company using a portable XRF unit and a further 1200 infill soil samples that were submitted to ALS Global for ICP analysis (note: duplicate sampling has confirmed that there is no statistical difference between the pXRF and ICP Cu soil data). The Diva trend copper (Cu) data is illustrated in the accompanying figure (Figure 1) with both colored symbols (circles) at each sample site on top of a gridded (kriged) copper image (TIFF). Rock samples were collected from rock outcrops throughout the property and are also illustrated in Figure 1 (triangles).

Along the Diva trend, surface copper mineralization comprises mainly copper oxides (malachite and chrysocolla) with minor sulphide (chalcopyrite and pyrite). The Company has recently completed a review of the 2017 and 2018 drill core from the Adriana zone and has identified copper mineralization and hydrothermal alteration associated with several discreet breccias. As a result, the Company is now examining the applicability of the Chilean Manto Cu deposit model to certain parts of the Chapitos Property, including the Adriana Zone within the Diva Trend. This is based not only upon the recognition of mineralized breccias that appear to be a primary control on Copper mineralization, but also upon the recognition of possible albite (sodic) alteration of volcanic host rocks proximal to breccias and possible metal zonation throughout the Adriana drill core with Cu-rich chalcocite dominant mineralization in the core of breccia zones and a ‘lower weight %’ Cu assemblage of bornite-chalcopyrite-pyrite peripheral to the breccias. Additional petrographic and geochemical work is underway to further investigate these observations. Images can be viewed at the Company’s website.

Newly delineated soil anomalies and high-grade rock samples exist along the Diva trend at the Maria and the Lourdes copper occurrences. The Maria copper occurrence lies approximately 2.5km SSE of the Adriana area and is defined by a ~600m-long Cu-in-soil anomaly near the south end of the Diva Trend, where recent sampling of copper-oxide mineralized volcanics has yielded high grade results. This target has not yet been drill tested. At Lourdes, which lies approximately 1.5km NNW along strike from the Adriana occurrence, an ~800m-long Cu-in-soil anomaly has been identified with coincident high-grade rock samples and also remains to be drill tested.

To date 17,500m of drilling has been conducted primarily at the Adriana, Katty, and Vicki occurrences. The Cu mineralization encountered remain open along strike and at depth. In addition to the identification and testing of new drill targets, the planned 2019 drilling and exploration program will include work intended to further define and potentially expand upon the mineralized zones that have already been identified at the Adriana and Katty zones where drilling has intersected 1.31% copper over 82.5m (Adriana DCH-024, press release October 2, 2017) and 1.20% copper over 21.4m (Katty DCH-014, press release August 22, 2017). The Company is working to gain a better understanding of the geology and the structural controls of the mineralization along the Diva trend with the intent to gather information for a future resource estimation effort.

During December 2018, Camino filed application for an expanded drill program with up to 200 new drill pad areas in which to continue the expansion of the Diva trend copper mineralization. The permit for this work is expected to be approved in the first quarter of 2019.

Camino is a discovery-oriented mineral exploration company. The Company is focused on the acquisition and development of high-grade copper and precious metal projects. For more information, please refer to Camino’s website at www.caminominerals.com. John Williamson, P.Geol., President, CEO and Director of Camino, is the Qualified Person as defined in National Instrument 43-101 and has reviewed and approved the technical contents of this press release.