To further evaluate where specific financial markets stand within the current economic environment, many have looked at commodity prices through wave theory to determine if a supercycle is likely 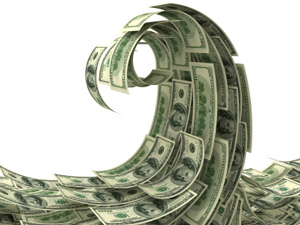 Current global monetary policy in the US and Europe continue to point to an ultra-easy stance that could be the underpinnings of a commodity supercycle. To further evaluate where specific financial markets stand within the current economic environment, many have looked at commodity prices through wave theory to determine if a supercycle is likely.

Wave principal incorporates cyclical and secular movements in financial markets in an effort to capture the overall psychology of the investor community. Cycle analysis has played a significant role for investors in determining the future direction of financial assets over the past century. Riskier assets such as commodity products have shown cyclical tendencies over the decades, and there have been a number of studies that haves captured the  historical wave patterns of commodities such as the Elliott Wave Principle, the Kondratieff Cycle, the Longwave Principle.

Wave analysis, as it relates to the capital markets, is the study of supply and demand of a financial instrument based on specific criteria. The Elliott Wave Principle focuses on price action, where Kondratieff and Longwave theories combine specific economic data points. One of the most prolific cycles’ theories is the Elliott Wave Principle which is a form of analysis that traders use to analyze market cycles. The underlying theme of Elliot wave is to identify extremes in investor psychology, and attempt to create an objective measurement technique to designate cycle movements.

Ralph Nelson Elliott, developed the underlying principles of the Elliott Wave Principle during the 1930s. Elliott published his theory of market behavior in the book The Wave Principle in 1938. The theory analyzes specific price movements or waves which determine a point in a cyclical trend.  For example, long-term bull markets move up in five waves, where long-term bear markets move down in three waves.  During the upward bull market movement, each wave is accompanied by corrections (labeled A, B and C) which are downward cycles waves.

There are three basic rules for Elliott Wave Principle:

The Kondratieff Cycle is a theory based on a study of price behavior combined with economic data which included wages, interest rates, raw material prices and other factors effecting economies. Kondratieff was convinced that his studies of economic, social, and cultural life proved that economic cycles existed and could be used for the purpose of anticipating future economic developments. The wave theory is centered on a growth and a contraction phase of the long wave, when growth and deflation are at their peaks respectively. The analysis differs in that it is less technically oriented and analyzes specific economic data points to determine levels of waves.

The Longwave Principle is based on the belief that the Kondratieff Cycle repeats itself over time. While the Kondratieff Cycle applies to past events, the Longwave Economic and Financial Cycle looks at multiple factors to determine where we are presently and uses that information to forecast future price action and economic activity. The Longwave Principle looks at the life cycle of an economy and uses those points to project the psychology of market participants.

The concept of a commodity supercycle grabbed the attention of the investment community after the Federal Reserve announced a second bond purchase program during the summer of 2010. With the economy reeling, many thought that a shot of liquidity would drive inflation higher and eventually create growth and higher inflation. The question for most analysts is whether commodity prices, reflected by the CRB Index, could climb two or three fold despite moving higher by 70 percent since the lows reached in March of 2009.

One analysis that can be used to forecast a super cycle in commodities is to examine the long term price trends and apply an Elliott Wave Principle. The pattern for price expansion or growth is depicted as a five price-swing sequence from mid 2002 to late 2008. Five waves were completed and reversed during the financial crisis of 2008-2009 which quickly ended the cycle with a crash of commodity prices. 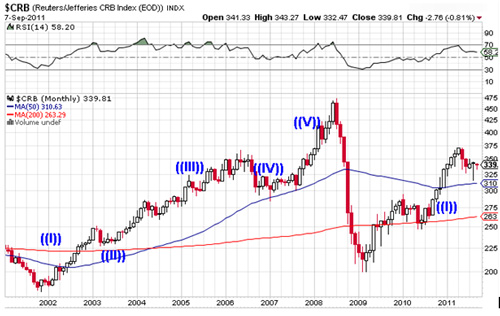 Markets have rebounded, and there are some factors that could take commodity prices above the recent highs in 2008 to supercycle highs. The first wave has started, but has yet to have a significant retracement. To ensure this phenomenon, specific conditions such as solid growth and continued liquidity will generate the momentum needed to create a supercycle.

Commodities generally have their strongest returns in late stages of economic cycles.  Given that the global economy is solely being driven by emerging market (EM) countries it could take time for the spare capacity and excess inventories to get worked off. Raw materials shortages, which occurred in the grain markets in both the US and Russia along with infrastructure constraints in the oil markets post the Libyan crisis continue to hamper commodity production. In the west, policymakers, are leaning heavily toward easy monetary policy and appear tolerant of inflation below 3 percent. Gold prices have acted as a safe haven and have helped commodity prices remain robust despite weaker than expected US and European growth.

The trend in the emerging markets is the end of the tightening cycle.

As the Federal Reserve has signaled a long term commitment to drive down interest rates and tolerate higher levels of inflation, commodities such as gold and silver have benefitted. The recent move, operation twist, allows the FOMC to sell 3-year Treasuries and buy 6-30 year Treasury notes, to decrease longer term interest rates. This in turn is positive for commodity prices.

The Bank of China is likely at the end of its tightening cycles, and Europe is likely to cut interest rates toward the end of the year.  Global central banks are providing excess liquidity which should allow the supercycle in commodities to continue.

The wave cycle in the CRB began after the market bottomed in March of 2003. Monthly charts portray the first leg of the cycle peaking in 2008, before the financial crisis ensued.  September of 2010, was likely the bottom of the second wave, and the current monetary policy is likely to bring on a third wave, driven by increasing global growth, and excess liquidly.  As Asia begins to benefit from declining interest rates, demand for commodities will generate an extended third wave in the current commodity cycle.  There will be counter-trends throughout the development of the next upward wave, but the underlying trend should be higher.