The Investing News Network takes a look at the major developments from the world of biotech in 2017.

At the end of 2016 the biotech industry had suffered one of its worst years on record; the outlook was murky and, then Donald Trump was elected president of the United States. While excitement surrounded potential tax breaks or lax laws with an approach that could benefit companies, the situation was still too uncertain. Over the course of 2017, the president’s tweets and comments have sent biotech stocks spiraling down with unclear warnings or criticisms of the medical industry.
Ronald Li, CEO of Novoheart TSXV:NVH) told the Investing News Network (INN) that despite the less than favourable condition at the beginning of the year for the biotech market, 2017 turned out to be better than expected
“Generally speaking, the biotech industry has seen a surge in fundraising interest from a range of traditional and non-traditional sources, including venture capitalists, industry players and family offices,” Li said. “Significantly more interests and transactions are also being seen in the emerging Asian market.”


Give me my free report!
As always it’s important to remind investors in the biotech space and the life science sector that patience is the name of the game with the mid and smaller stocks.
Here, INN takes a look back to noteable biotech trends of 2017 with insight from industry analysts and companies in the space.

The evolving nature of the FDA

The US Food and Drug Administration (FDA) was in need of a complete overhaul and update according to many industry experts and the president himself.
“If we slash the restraints, not just at the FDA but across our government, then we will be blessed with far more miracles just like Megan,” Trump said referring to a girl treated for Pompe disease he introduced during his first speech to Congress.
Li agrees with the proposal to update the drug development process. “Drug approvals dropped sharply in 2016: for example, the FDA approvals dropped from 45 in 2015 to 22 in 2016,” Li explained. “The figures do validate the notion that the traditional paradigm for drug discovery and development is in need of disruption.”
Enter Scott Gottlieb, the FDA commissioner was appointed in 2017 and immediately started changing things around. Under Gottlieb has provided one of the more competent government agencies during Trump’s presidency so far.
Gottlieb’s FDA has encouraged the development of more generic drugs to reduce prices and bring competition into an expensive market. The commissioner has expressed in favour of novel therapies across the biotech sector like immuno-oncology.
The FDA has shown that it is willing to speed up development processes that may be stagnant if the data validates it. In September, STAT News wrote on the case of PTC Therapeutics (NASDAQ:PTCT) requesting another look at their Duchenne muscular dystrophy treatment.
The independent review saw only one advisory committee vote in favour of the candidate. “The through line, from panelists and FDA staff alike, was simple: The agency is plenty willing to bend the rules, but companies have to do better than PTC’s binder full of failed trials and after-the-fact analyses,” STAT wrote in an email newsletter.

The rise of immuno-oncology therapies

Cancer therapies have evaded companies and researchers due to their complexity–time and time again critical trials for new cancer drugs have failed. This year saw some critical failures that slowed down the promise of the oncology sector.
Possibly one of the most devastating trial failures in 2017 for biotech prospects was AstraZeneca’s (NYSE:AZN) combination therapy of Imfinzi and CTLA-4 inhibitor tremelimumab treating lung cancer missing its study endpoint.
AstraZeneca didn’t take a substantial hit to their share price then, but this novel market took a major setback on what could have been a promising new product.
Despite the setback, researchers and analysts have shown their excitement for these new therapies as the way of the future for the biotech market. The FDA agrees on their use and approved a candidate that raised eyebrows over its pricing this year.
Novartis (VTX:NOVN; NYSE:NVS) received an approval in August for their CAR-T therapy candidate treating cancer. The therapy received a premium price tag of $475,000, which was under the estimates of analysts. The price of this therapy signaled to the novelty of these treatments, the premium price tag shows the amount of resources these companies are pouring into the work behind them.
Another major development in this sector was Gilead Sciences (NASDAQ:GILD) blockbuster acquisition of Kite Pharmaceuticals, previously a public company, for nearly $11.9 billion. This acquisition earned a “Deal of the Year” recognition from BioPharma DIVE. Thanks to this deal Gilead took Yescarta under their portfolio, which is a treatment that received an early FDA approval.
The work done by Kite represents the intersection of pharma, genetics and biotech, resulting in a steady growth for Gilead. Despite their continued dominance–represented by market cap of nearly 100 billion– the company has seen a 4.92 percent increase to their share price over a year-to-date period throughout 2017. 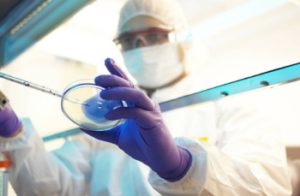 A report from Zacks indicated the promise of mergers and acquisitions in 2017 boosting the pharma and biotech markets would instead move over towards 2018.
“According to Mergermarket’s Global Pharma, Medical & Biotech trend report for Q317, M&A in the global pharma, medical and biotechnology sector was in the range of $207.6 billion spanning 1,040 deals so far this year, declining 9.9% from the year-ago period,” the report indicated.
Another indicator of biotech’s performance in 2017 was from the major exchange-traded funds (ETF). The iShares NASDAQ Biotechnology ETF (NASDAQ:IBB) saw an increase of 20.24 percent year-to-date, while he NASDAQ Biotechnology ETF (NASDAQ:NBI) steadily increased 20.47 percent since the start of  2017.
While the biotech market may fall relatively flat in 2017, as research consolidates on the I/O side of things and smaller companies get to advance their candidates in this space, overall the year was better than expected for the industry.
Don’t forget to follow us @INN_LifeScience for real-time news updates!
Securities Disclosure: I, Bryan Mc Govern, hold no direct investment interest in any company mentioned in this article.