A Canadian cannabis producer has adjusted its construction plans for a facility expansion in British Columbia, Canada, in an attempt to prevent disruption to its cash flow.

In an update to investors issued on Monday (October 21), Zenabis Global (TSX:ZENA) confirmed the adjusted timeline for the facility. The new plan will delay the site in reaching full capacity.

According to Andrew Grieve, CEO of Zenabis, the facility will still achieve production of 96,400 kilograms by the end of 2019.

“While the timeline revision for Zenabis Langley will delay achieving full design capacity at the facility, we expect to have 96,400 kg of capacity licensed and operational by the end of 2019 with approval of the Zenabis Langley – Part 2A amendment,” Grieve said.

Zenabis filed an amendment for the 2A phase of its expansion in September and anticipates it will obtain Health Canada approval this year.

The firm plans to submit its license amendment to the regulator for the 2B section in November, while 2C will have to wait until early 2020.

Zenabis indicated that this decision was made due to market conditions at the moment and as way to lower ramp-up risk.

The marijuana producer has lofty expectations for its facility operations and production in Langley.

The market did not take kindly to the delay in Monday’s trading session. Shares of Zenabis opened at C$0.68 and then quickly fell by 4.41 percent to C$0.65 as of 10:35 a.m. EDT following the announcement. 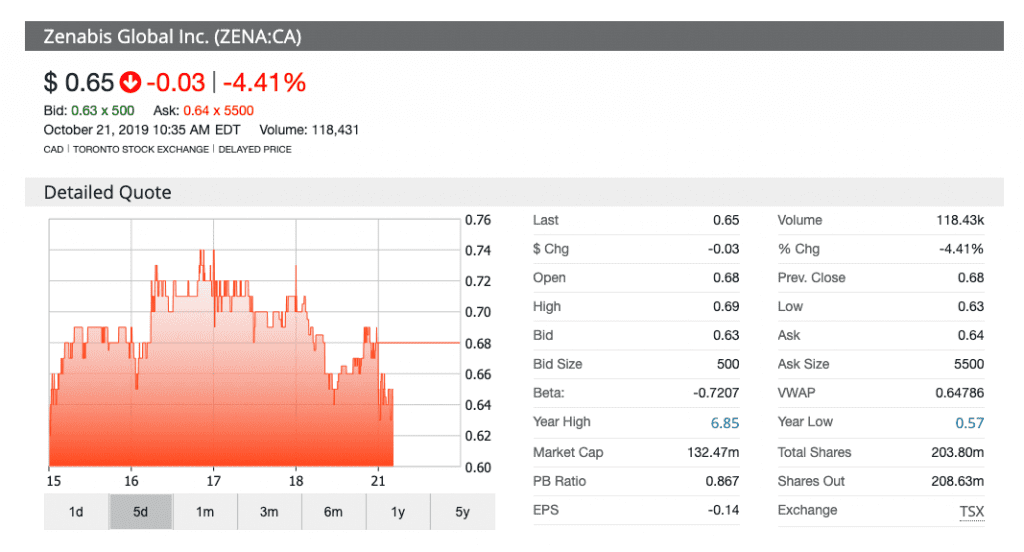 On analyst data aggregator TipRanks, Zenabis currently holds a “moderate buy” rating based on two recent reviews of the stock.

The Cannabis Derivatives, branded as Aureus™, are cultivated, extracted, and manufactured by SMGH. In addition, for Avicanna’s global input needs, SMGH also supplies other pharmaceutical and cosmetics companies with cannabinoids including CBD, THC, and rare cannabinoids such as CBG in addition to supplying global cultivation companies with standardized and feminized seeds. This new export to Chile is a recurring order and part of on-going relationship with an established homeopathic Chilean company.

Following the release of its second quarter fiscal year 2022 financial results, Canopy Growth will host an audio webcast with David Klein , CEO and Mike Lee , EVP & CFO at 10:00 AM Eastern Time on November 5, 2021 .

A live audio webcast will be available at:

About Canopy Growth Corporation
Canopy Growth (TSX: WEED , NASDAQ:CGC) is a world-leading diversified cannabis and cannabinoid-based consumer product company, driven by a passion to improve lives, end prohibition, and strengthen communities by unleashing the full potential of cannabis. Leveraging consumer insights and innovation, we offer product varieties in high-quality dried flower, oil, softgel capsule, infused beverage, edible, and topical formats, as well as vaporizer devices by Canopy Growth and industry-leader Storz & Bickel. Our global medical brand, Spectrum Therapeutics, sells a range of full-spectrum products using its colour-coded classification system and is a market leader in both Canada and Germany . Through our award-winning Tweed and Tokyo Smoke banners, we reach our adult-use consumers and have built a loyal following by focusing on top quality products and meaningful customer relationships. Canopy Growth has entered into the health and wellness consumer space in key markets including Canada , the United States , and Europe through BioSteel sports nutrition, and This Works skin and sleep solutions; and has introduced additional hemp-derived CBD products to the United States through our First & Free and Martha Stewart CBD brands. Canopy Growth has an established partnership with Fortune 500 alcohol leader Constellation Brands. For more information visit www.canopygrowth.com .

of such terms and phrases as “intend,” “goal,” “strategy,” “estimate,” “expect,” “project,” “projections,” “forecasts,” “plans,” “seeks,” “anticipates,” “potential,” “proposed,” “will,” “should,” “could,” “would,” “may,” “likely,” “designed to,” “foreseeable future,” “believe,” “scheduled” and other similar expressions. You are cautioned not to place undue reliance on these forward-looking statements, which speak only as of the date the statement was made. Forward–looking statements are necessarily based upon a number of estimates and assumptions that, while considered reasonable by management, are inherently subject to significant business, economic and competitive risks, financial results, results, performance or achievements expressed or implied by those forward–looking statements and the forward–looking statements are not guarantees of future performance. Accordingly, there are or will be important factors that could cause actual outcomes or results to differ materially from those indicated in these statements. A discussion of some of the material factors applicable to Canopy Growth Corporation (“Canopy”) can be found under the section entitled “Risk Factors” in Canopy’s Annual Report on Form 10-K for the year ended March 31, 2021 , filed with the Securities and Exchange Commission and with applicable Canadian securities regulators, as such factors may be further updated from time to time in its periodic filings with the Securities and Exchange Commission and with applicable Canadian securities regulators, which can be accessed at www.sec.gov/edgar and www.sedar.com , respectively. These factors should not be construed as exhaustive and should be read in conjunction with the other cautionary statements that are included in this press release and in the filings. Any forward–looking statement included in this press release is made as of the date of this press release and, except as required by law, Canopy disclaims any obligation to update or revise any forward– looking statement. Readers are cautioned not to put undue reliance on any forward–looking statement. Forward-looking statements contained in this press release are expressly qualified by this cautionary statement.

The world of cannabis consumption is set to change radically, thanks in large part to the advancement of state-of-the-art research on the plant itself.

Adastra Holdings Ltd. (formerly Phyto Extractions Inc.) (CSE: XTRX) (FRA: D2EP) (“Adastra”, or the “Company”) is pleased to announce that it has retained Hybrid Financial Ltd. (“Hybrid”) to provide marketing services to the Company. Hybrid has been engaged to heighten market and brand awareness for Adastra and to broaden the Company’s reach within the investment community.