Shares of WeedMD (TSXV:WMD,OTCQX:WDDMF) jumped in the past few days following the dual announcement of an acquisition and financing deal.

The volatility following the announcement caused the company’s CEO Keith Merker to write an open letter to investors, sent on Monday (December 2), addressing some of the headwinds the firm is facing that led to its acquisition of Starseed Holdings and an additional financing deal with the Labourers’ Pension Fund of Central and Eastern Canada (LPF).

“Capital has become scarce and expensive, and the adult-use market has been slower to ramp and at thinner margins for licensed producers than many originally anticipated,” Merker told investors. “These market pressures have forced us, like many others, to reevaluate our business.”

On Friday, the licensed producer (LP) confirmed it was acquiring the Toronto-based cannabis company Starseed in an all-stock deal valued at C$78 million, which is set to close later in December.

As a part of the transaction, LPF, Starseed’s largest backer, will make a concurrent C$25 million equity investment into WeedMD. 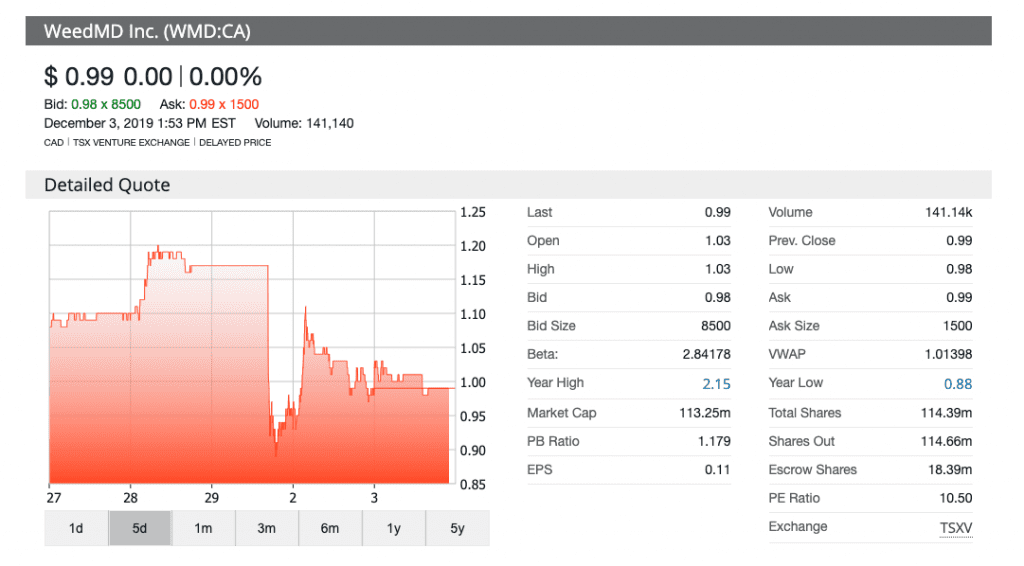 The cash infusion comes at a critical time in an industry marred by an increased difficulty to put together financing deals amid market volatility and adjustments in valuations.

Merker added that while the firm had succeeded in making its cannabis production as cost-effective as possible, it had struggled to lock its own high-margin distribution channels and establish a strong balance sheet.

That’s where Starseed comes in, according to Merker.

WeedMD said this new deal between itself and Starseed will leverage its low-cost production against Starseed’s sales channels to boost the revenue generation while saving up to C$10 million per year by the end of 2020.

Thanks to LPF’s investment, WeedMD said its pro forma cash balance now sits at approximately C$56 million. The deal gives WeedMD shareholders 55 percent of the new company, while Starseed shareholders, including LPF, will own 45 percent.

Starseed boasts a medical-focused approach to the marijuana industry. Through a partnership with Canada’s largest construction union, the Laborers’ International Union of North America (LiUNA), Starseed offers medical cannabis as a fully covered benefit to LiUNA’s more than 100,000 members and retirees.

“Starseed brings a critical part of this business equation that has been difficult for the market to find: consistent, sticky distribution channels with direct access to fully covered and insured patients,” said Merker during an earnings call on Friday.

Friday proved to be a packed day for WeedMD as the company also released its results for Q3 2019.

Net revenue came in at C$6.7 million, down from the nearly C$8 million generated during the previous quarter. There was also a drop in the gross profit before changes in fair value to C$1.9 million in Q3 from C$3.7 million in Q2.

The firm’s first outdoor harvest cultivation yield brought in eight tons of dried cannabis at a cost-to-harvest of C$0.16 per gram.

The yield now comes under the company’s anticipated weight, but as Merker explained, his firm is still finding its way through the world of outdoor harvesting.

“This was our first outdoor season and opportunity to figure out what works best — everything from proper nutrients, watering requirements, irrigation needs, air flow, etc.,” the executive said.

During the call, Merker assured investors and analysts that the yield was of high quality. The executive said of the over 35 strains originally planted, a majority of the strains contained over 20 percent of tetrahydrocannabinol (THC).

/NOT FOR DISTRIBUTION TO U.S. NEWSWIRE SERVICES OR DISSEMINATION IN THE UNITED STATES /

Revive Therapeutics Ltd. (” Revive ” or the ” Company “) (CSE:RVV) ( USA : RVVTF), a specialty life sciences company focused on the research and development of therapeutics for medical needs and rare disorders, is pleased to announce that it has entered into an amended agreement with Canaccord Genuity Corp. and Leede Jones Gable Inc. as the co-lead underwriters (collectively, the ” Underwriters “), to increase the size of its previously announced offering of units (the ” Equity Units “) at a price of $0.50 per Equity Unit. Under the amended terms, the Underwriters have agreed to purchase, on a bought deal basis, 40,000,000 Equity Units for gross proceeds to the Company of $20,000,000 (the ” Offering “). The over-allotment option granted to the Underwriters will proportionately increase to 15% of the Offering.

The Company announced today that its board of directors have approved a private placement of up to 15,000,000 units at a price of $.40 per unit for gross proceeds of up to $6,000,000. Each unit will consist of one common share of the Company and one share purchase warrant. Each share purchase warrant will be exercisable to purchase an additional common share at a fixed price of $.45 per share for a period of one year from closing.

The following issues have been halted by IIROC: