Water Ways Technologies Inc. reports its financial and business results and is pleased to provide highlights and comments.

Water Ways Technologies Inc. (TSXV:WWT) (“Water Ways” or the “Company”) reports its financial and business results and is pleased to provide highlights and comments on the results for the three months ended September 30, 2019. The Company’s financial statements are prepared in accordance with International Financial Reporting Standards (“IFRS”).

Ohad Haber, President, CEO and Chairman of the Board of Water Ways, commented: “The Company continues our development plan and expansion upon our listing on the TSX-V in March 2019. We continue to increase our global footprint in the cannabis industry with the launch of CANNAWAYS with the intention of positioning Water Ways as a key technology provider to cannabis cultivators around the world. We have now received the third order for the system which proves the acceptance in the market.” Mr. Haber continued: “We have started to build our presence in the North American farming community and irrigation market after establishing our Heartnut grove subsidiary in Ontario. I am happy to inform that we in the middle of the process establishment of our new Chinese subsidiary in China. As a result of our strategy, we have received a substantial order that and have a very positive outlook for 2020. Mr. Haber continued: “While our revenue was slightly higher, compared to the same period in 2018, our project and acquisition pipeline continues to expand, and I am especially pleased with the substantial increase in sales of our product division. We look forward to providing more exciting updates as the Company continues to expand its global footprint.”

The increase in selling, general and administrative expenses in 2019 was mainly as a result of increase in wages during 2019, legal expenses, fees paid in relation to stock exchange announcement and participation in cannabis trade shows.

The Company allocated the incremental costs that were directly attributable to issuing new shares to equity (net of any income tax benefit) and the costs that were related to the stock market listing or are otherwise not incremental and directly attributable to issuing new shares, were recorded as an expense in the statement of comprehensive income. Costs that were related to both share issuance and listing were allocated between those shares based on the number of shares.

Cash and cash equivalents were C$0.74 million as compared to C$0.32 million;

In July 2019, the Company announced the launch of CANNAWAYS, an Internet of Things controlled irrigation and fertilization system for cannabis cultivators and growers, which is one of the first systems in the world that is designed specifically for cannabis growers and cultivators. The CANNAWAYS system was developed in Israel and had been successfully tested on one cannabis cultivation site.

The company is pleased to report that it had delivered one system to a major project involving a Canadian Licensed Producer (“LP”) in Israel and has received two additional orders for the system from Israeli LP’s to new medical Cannabis cultivating facilities in Israel. The total value of the two orders is C$ 0.58 million and the Company expects delivery in H1 of 2020.

Following the successful implementation of a Cannabis project in Israel, the Company has put a substantial amount of effort to penetrate the Canadian cannabis and hemp cultivation markets. Through its recent established subsidiary, Heartnut Grove WWT Inc.(“Heartnut”), the Company intends to penetrate the market by establishing ongoing distribution relationships with buyers of irrigation and cultivation equipment throughout the country. Heartnut sales in the three month ended September 30, 2019, were $C0.279 million.

The Company is currently in negotiations to deliver turnkey irrigation solutions to cannabis and hemp cultivators in several European and Latin American countries and in Israel. The Company has entered an understanding with a veteran of the cannabis growing business and a former Chief Executive Officer of one of the first LP’s in South America to singlesource commercial cannabis and CBD Hemp cultivation solutions including dehumidification, lighting technologies, irrigation, fertigation and benching.

The Company has signed Memorandum of Understanding (the “MOU”) with a Colombian company, Emerald Bud Corp. (“Emerald”), to assist in the development, supply, installation, and technical support in connection with a project of approximately 43,580 square meters (approximately 10.6 Acres) of greenhouse area, for the production of medical Cannabis in the municipality of San Gil, department of Santander, Colombia. The MOU is subject to certain conditions including: Emerald obtaining the licenses and permits required for the development of the Project; Emerald obtaining the required financing to complete the Project; and Emerald and the Company entering into a definitive agreement confirming the economic terms of the Project. The Company expects the definitive agreement to be signed by the parties by the end of Q2 of 2020 resulting in a material effect on its 2020 and 2021 results.

The Company gained experience through its delivery of an irrigation, fertigation and Internet of Things control system to an Israeli subsidiary of Cronos Group Inc., which is a greenhouse cultivation project located at Kibbutz Gan Shmuel, approximately 50km north of Tel Aviv. The Company has received two orders for delivering Irrigation and fertigation systems that includes the CANNAWAYS system to two Israeli LP’s. The company expects to deliver the systems in Q1 of 2020. The projects are valued at C$0.59 million.

In July 2019, the Company completed its first irrigation project in Uzbekistan, which valued approximately C$0.48 million and was recognized in the second quarter of 2019. The project irrigates via drip irrigation technology servicing a field of 160 hectares of cotton and includes a 20 km reservoir for sedimentation. The irrigation solution has been fully delivered to the client after a completion of the quality assurance inspection, and the operation of the system will start in the third quarter of 2019 with agronomic and technical assistance from the Company. Water Ways believes that drip irrigation for cotton will be part of the Uzbekistan government’s national plan for water and soil conservation.

The Company has received a second order of its second irrigation project which valued approximately C$0.48 million. The company expects to deliver the systems in Q1 of 2020.

On July 25, 2019, the Company announced that it has signed two new irrigation projects in the Federal Democratic Republic of Ethiopia. The first project consists of the installation of advanced irrigation technology assembled at a 3,000 hectare sugar cane field and the supply of various components, such as valves and fittings for sprinkler systems. The value of this project is approximately $C0.56 million. The Company is currently delayed until the customer will be able to open a letter of credit to secure the project.

The second project consists of the upgrade of an existing 25-hectare herb greenhouse, valued at approximately $C0.18 which will focus on redesigning and remaking the farm’s head control system, including pumps, filters, controllers, fertigation units, valves, pipes, fittings and accessories. The project was finalized during the third quarter and revenue recognized was $C0.18 million.

On August 22, 2019, the Company that it has received a purchase order, from one of South America’s leading flower growers, to deliver more than 30 high tech water treatment solutions. The purchase order is valued at approximately $C1.3 million. First systems are expected to be delivered in Q4 of 2019 and the balance over the course of a few months. The water treatment systems are comprised of high-tech filtration systems based on self-cleaning filters and physical separation technologies to eliminate the existence of unique worms (Plant Parasite Nematodes) in irrigation water that originates from rivers. The WWT water treatment systems replace the need for chlorine, which was previously used by the flower grower to exterminate the worms, allowing the flower grower to use a clean and chemical free process reducing the cost and potential pollution to the soil. The system was tested by the client for over a year in field tests and once fully accepted WWT received the full order for over 30 systems. During the third quarter the company recognized revenue of $C0.06 million.

The following tables set forth consolidated statements of financial information of Irri-Al-Tal Ltd. (“Irri-Al-Tal”) and Heartnut Grove WWT Inc., wholly owned subsidiaries of the Company, since the reverse-takeover transaction between Irri-Al-Tal and the Company has occurred during the first quarter ended March 31, 2019.

A comprehensive discussion of Water Ways’ financial position and results of operations is provided in the Company’s Management Discussion & Analysis (“MD&A”) for the three and nine months ended September 30, 2019 filed on SEDAR and can be found at www.sedar.com. 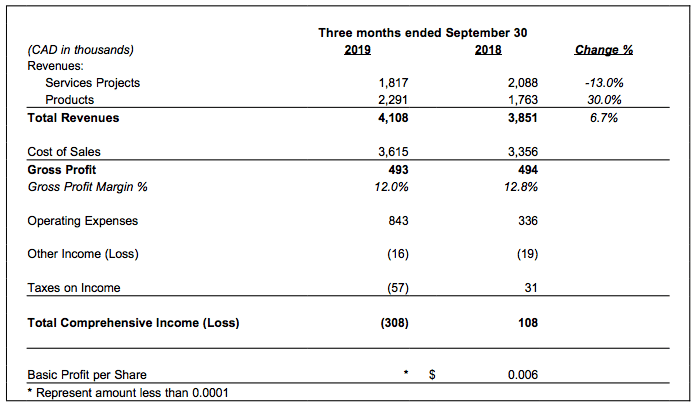 Water Ways is the parent company of Irri-Al-Tal Ltd. (“IAT”) which is an Israeli based agriculture technology company that specializes in providing water irrigation solutions to agricultural producers. IAT competes in the global irrigation water systems market with a focus on developing solutions with commercial applications in the micro and precision irrigation segments of the overall market. At present, IAT’s main revenue streams are derived from the following business units: (i) Projects Business Unit; and (ii) Component and Equipment Sales Unit. IAT was founded in 2003 by Mr. Ohad Haber with a view of capitalizing on the opportunities presented by micro and smart irrigation, while also making a positive mark on society by making these technologies more widely available, especially in developing markets such as Africa and Latin America. IAT’s past projects include vineyards, water reservoirs, fish farms, fresh produce cooling rooms and more, in over 15 countries.

Click here to connect with Water Ways Technologies (TSXV:WWT) for an Investor Presentation.