Tilray’s market cap has risen from an original US$1.5 billion market cap since its initial public offering (IPO) debut to reach a market cap of US$10.80 billion on Thursday (September 13).

Meanwhile, Canopy’s market cap on the Toronto Stock Exchange (TSX) has reached C$13.09 billion, or roughly just over US$10 billion.

Since its IPO, Tilray’s share price has soared over 350 percent, with a significant portion of these gains coming in August.

Tilray closed the trading session on Thursday with a 14.11 increase to its stock, representing a price of US$119.76, although after hours trading brought the company’s down 7.61 percent.

Some of the growth seen by the company recently is being attributed to Tilray obtaining permission to export medical cannabis into Germany.

According to the company its cannabis extracts had been available in the European nation through partnerships with German pharmaceutical wholesalers.

Tilray a favorite for next alcohol partnership

Following the rumors of an entry from alcohol producer Diageo (NYSE:DEO) into the cannabis space, shares for Tilray quickly accelerated as the company became the one mentioned the most by financial advisors to gain some sort of alcohol partnership.

“[Tilray is] a quality name in the space and it would make a good partner for someone looking to enter [like a] beverage company,” Doug Waterson, CFO and portfolio manager with Faircourt Asset Management and manager of the Ninepoint UIT Alternative Health Fund told the Investing News Network (INN).

Cowen & Co. analyst Vivien Azer said Tilray is a natural candidate, given the positive attributes around its portfolio construction during a televised interview. The analyst also issued a research note calling the company an “attractive partner” for an alcohol company seeking to enter the space. 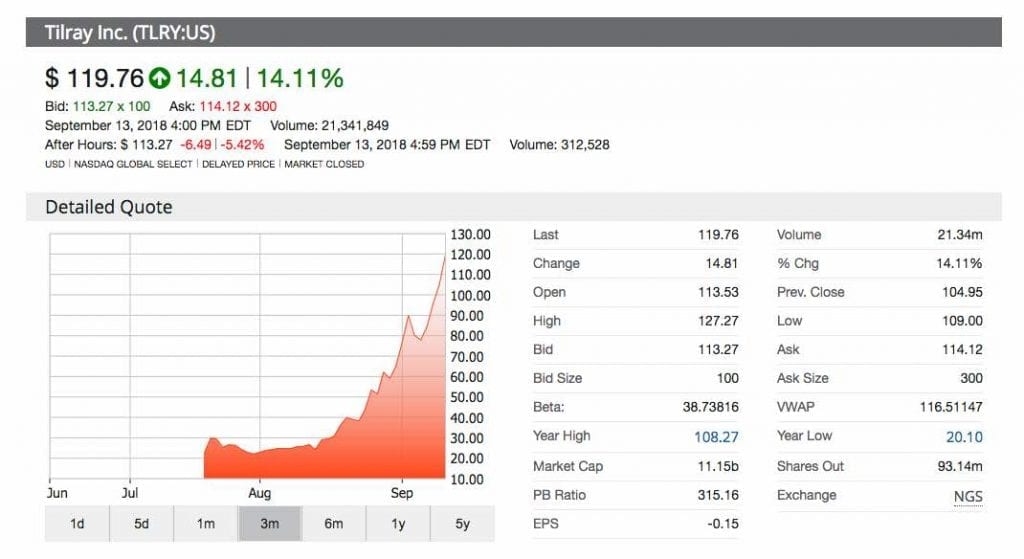 As part of its Q2 2018 financial report, the company shared it had produced revenue of US$9.7 million for the quarter. This income was produced from medical sales in Canada, wholesale to other Canadian producers and international sales.

Tilray has also guaranteed its product will hit the recreational market across Canada — thanks to supply agreements with Ontario, BC, Quebec, Manitoba, PEI, Nova Scotia, Yukon and the Northwest Territories — through its recreational brand subsidiary High Park Holdings.

With the quickly growing cannabis market, various financial advisors and observers of the public sectors have raised eyebrows at the fundamentals and reality of the space compared to current valuations and market caps.

Since cannabis won’t become legal for adult-use in Canada until October 17, these companies have received revenues from medical sales or other forms of transactions. The expectation for cannabis producers raising capital is that, once the market comes online, investors will get a better sense of what the value should be.

Charlie Bilello, director of research at Pension Partners, manager of the ATAC Rotation Fund (ATACX), tweeted charts comparing Tilray’s share and market cap with those of other more established industries.

With these rises for cannabis stocks, comparisons to the cryptocurrency rush of 2017 and the dotcom bubble have become inevitable for the booming sector.

During the Vancouver edition of the International Cannabis Business Conference (ICBC) Nic Easley, CEO of 3C Consulting and a managing partner with Multiverse Capital, told INN investors needed to be ready for the bubble to pop.

“The bubble is caused for all the speculation and all the international markets that they can sell things to,” Easley said. He added this leads to a “curve of disillusion” from rising potential.

The executive said during a panel the cannabis bubble, in his opinion, was three times worse than the dotcom bubble.

Despite Tilray’s rush on Wednesday, the rest of the cannabis market took a hit during the trading session. The Horizons Marijuana Life Science Index ETF (TSX:HMMJ) fell 9.73 percent while the Evolve Marijuana ETF (TSX:SEED) lost C$2.21 in value, representing a 9.46 percent reduction.

The only other Canadian LP with public stock on the NASDAQ, Cronos Group (NASDAQ:CRON;SX:CRON), dipped on Thursday 10.29 and closed at a price of US$10.11 per share in the US exchange. During after hours trading the company declined an additional 3.07 percent.

/NOT FOR DISTRIBUTION TO UNITED STATES NEWSWIRE SERVICES OR FOR DISSEMINATION IN THE UNITED STATES. ANY FAILURE TO COMPLY WITH THIS RESTRICTION MAY CONSTITUTE A VIOLATION OF UNITED STATES SECURITIES LAWS/

Avicanna Inc. (the “ Company ” or “ Avicanna ”) (TSX: AVCN) announced today that it has been issued a Cease Trade Order (“ CTO ”) by the Ontario Securities Commission (the “ OSC ”) as it no longer expects to file the following periodic disclosure documents (collectively, the “ Documents ”) by June 11, 2021, as previously disclosed:

Trulieve Reports Results of 2021 Annual and Special Meeting of Shareholders

Adds two accomplished female directors to the Board

Trulieve Cannabis Corp. (“Trulieve” or the “Company”) (CSE: TRUL) (OTCQX: TCNNF), a leading and top-performing cannabis company in the United States today announced the results of its Annual and Special Meeting of Shareholders held on June 10, 2021 (the “Meeting”). Each of the eight individuals nominated for election as a director of Trulieve at the Meeting were elected, including new nominees, Giannella Alvarez and Jane Morreau .

The National Football League (NFL) wants to know more about cannabis as a pain reliever, and it’s willing to put up an initial US$1 million for research.

Also this week, a cannabis operator announced plans to buy assets from a languishing producer.

Trulieve Cannabis Corp. (CSE: TRUL) (OTCQX: TCNNF) (“Trulieve” or “the Company”), a leading and top-performing cannabis company based in the United States announced today the opening of a new Florida dispensary, the Company’s 89th nationwide.

The dispensary will be located next to the Citrus Park Town Center and helps meet Trulieve’s goal of ensuring medical cannabis patients across Florida have safe, reliable access to the medications they rely on. The facility joins four other Tampa dispensaries, as well as several more in nearby Clearwater , St. Petersburg , and Largo.

On June 10, 2021, RCP23, LLC (the “Seller”), a private investment holding company controlled by Benjamin Kovler, CEO and Chairman of Green Thumb Industries Inc. (the “Issuer”) (CSE: GTII) (OTCQX: GTBIF), sold 1,666,667 Subordinate Voting Shares of the Issuer (the “Transferred Shares”) to a third-party qualified institutional buyer at a purchase price of US$30.00 per share in a private transaction.

“This transaction brings Green Thumb a new institutional shareholder who is aligned with management’s long-term vision,” said Manager of RCP23 Benjamin Kovler.  “RCP23 has historically sold shares on behalf of our legacy shareholders who invested prior to Green Thumb going public.”

Mota Enters into Licensing Agreement with Phenome One

Trulieve Reports Results of 2021 Annual and Special Meeting of Shareholders