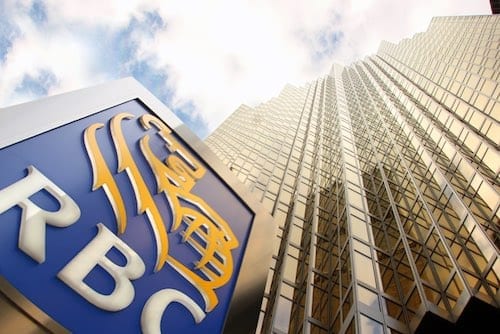 Royal Bank of Canada confirmed it will cover the emerging industry and advise in stock purchases and acquisitions within the space.

As the cannabis industry continues its search for legitimacy at the global marketplace, a Canadian bank has decided to begin working in this market.

According to a new report, Royal Bank of Canada (RBC) (TSX:RY) confirmed on Tuesday (December 18), it will begin covering the sector with a dedicated analyst and set up a division to aid deals for the industry.

“We’re going to be selective in our approach, frankly, but within the bank we’ve established a policy that we’re comfortable with,” RBC Capital Markets head Doug McGregor told Bloomberg.

The bank will seek to participate in stock sales, takeovers and other market activities.

McGregor explained RBC had not stepped into the space yet due to previous uncertainty in the sector.

Throughout 2018, Canadian banks started to participate in the cannabis industry after taking notice of its growth and seeing the revenues for smaller banking institutions heavily participating in the emerging space.

Bank of Montreal (BMO) (TSX:BMO) became the first major Canadian bank to participate in a bought deal with Canopy Growth (NYSE:CGC,TSX:WEED) in January, alongside GMP Securities.

At the time of the deal, Greg Taylor, portfolio manager with Purpose Investments, told the Investing News Network the BMO deal started to offer legitimacy to the cannabis market.

Similarly in July, Toronto-Dominion (TD) Bank (TSX:TD) reversed its stance on pot stocks when it added 13 cannabis listings for its advisers to recommend to investors.

“Our most recent update reflects our ongoing evaluation of this emerging market,” TD spokesman Paolo Pasquini told The Globe and Mail at the time. “We expect our views will continue to evolve and develop with the industry.”

With a focus on acquisitions, RBC is looking to capitalize on a volatile market that has shown a willingness to participate in mergers and acquisitions as part of a larger trend of consolidation in Canada.

One response to “Royal Bank of Canada to Initiate Cannabis Coverage”