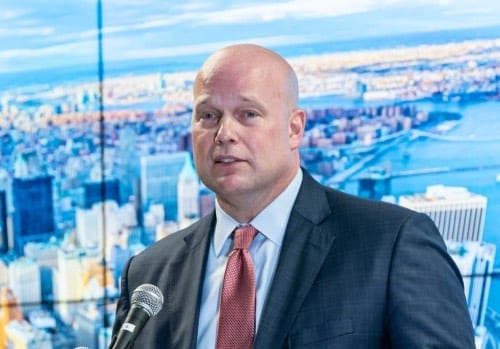 Whitaker, along with his law firm, Graves Garrett, will coordinate legal matters and develop a legal strategy for the company as it expands.

Matthew Whitaker, former acting US attorney general, has joined the marijuana industry, working as an outside counsel to Ontario-based Alternate Health (CSE:AHG,OTCQB:AHGIF).

Alternate Health is a hemp-derived cannabidiol (CBD) producer developing a variety of branded products. The company confirmed on Tuesday (August 27) that Whitaker, along with his law firm, Graves Garrett, will coordinate legal matters and develop a legal strategy for the company as it expands.

Whitaker served as the acting attorney general of the US from November 2018 until February 2019, when US President Donald Trump nominated William Barr to fill the position, replacing Whitaker. Prior to that, he served as the US attorney for the Southern District of Iowa.

In a press release, Whitaker said he is looking forward to the challenge of advising Alternate Health’s management team.

“I think there is serious potential in the CBD industry, and everyone at Alternate Health will work hard to be a leader in the industry,” Whitaker added.

In the announcement, company president Dr. Robert Blaine said it is “essential” that Alternate Health stay ahead of the curve as the legal environment surrounding CBD changes with new government and FDA regulations.

“We believe (Whitaker’s) experience in government and the Department of Justice is a significant asset as we move forward,” Blaine said.

The former attorney general will also be tasked with leading the company’s efforts to investigate the actions of a California-based competitor in Canada.

Scott Holtby, vice president of communications for Alternate Health, told the Investing News Network (INN) he cannot divulge any details about the investigation.

The press release also says that Alternate Health will be divesting its cannabis assets and focusing completely on hemp-derived CBD.

This decision follows in the footsteps of an announcement in May that indicated the company would be refocusing its assets towards the booming hemp-derived CBD industry in the US.

Holtby added that, due to the illegal status of cannabis and the passing of the farm bill last year, which legalized the production of hemp and its derivatives, the CBD market currently has great potential.

“The way we see the next couple of years is that, due to the legal environment surrounding (marijuana), we think the most amount of opportunity for our products and our system will be in CBD,” he told INN.

Recently, Whitaker and his firm also became outside counsel for PC Matic, a cybersecurity company, and Whitaker is now managing director of political consultancy Clout Public, a division of Axiom Strategies.

Whitaker’s months-long stint as head of the US Department of Justice was undercut with judgment for close business ties with Trump and criticism of the investigation into Russian interference in Trump’s rise to the presidency.