CannTrust told investors that it no longer complies with the US$1 share price threshold the NYSE requires in its listing standards.

CannTrust Holdings (NYSE:CTST,TSX:TRST) is at risk of getting bumped off the New York Stock Exchange (NYSE) because of its too-low share price, the company said in a press release.

The embattled Ontario-based cannabis firm told investors on Tuesday (December 10) it had received a notice from the exchange stating that it no longer complies with the US$1 price-per-share threshold the NYSE requires over a consecutive 30 day period to remain in line with its listing standards.

CannTrust said it now has six months to get its closing and average share price up to scratch for at least 30 days in a row, during which its common shares will continue to list on the NYSE.

The news comes just weeks after the Toronto Stock Exchange (TSX) said it would delist CannTrust’s TSX shares if did not receive certain financial documents by March 25, 2020, including restated interim financial statements for the first, second and third quarters of 2019.

“CannTrust anticipates filing those disclosures and meeting the TSX’s requirements before March 25, 2020. The company continues to make progress in working with its independent auditor in connection with preparing its financial statements and corresponding MD&A,” the firm said at the time.

The company has been under fire since July, when Health Canada flagged its cultivation facility in Pelham, Ontario, as non-compliant because the company was growing cannabis in unlicensed rooms and had used false walls to hide the illegal operations. 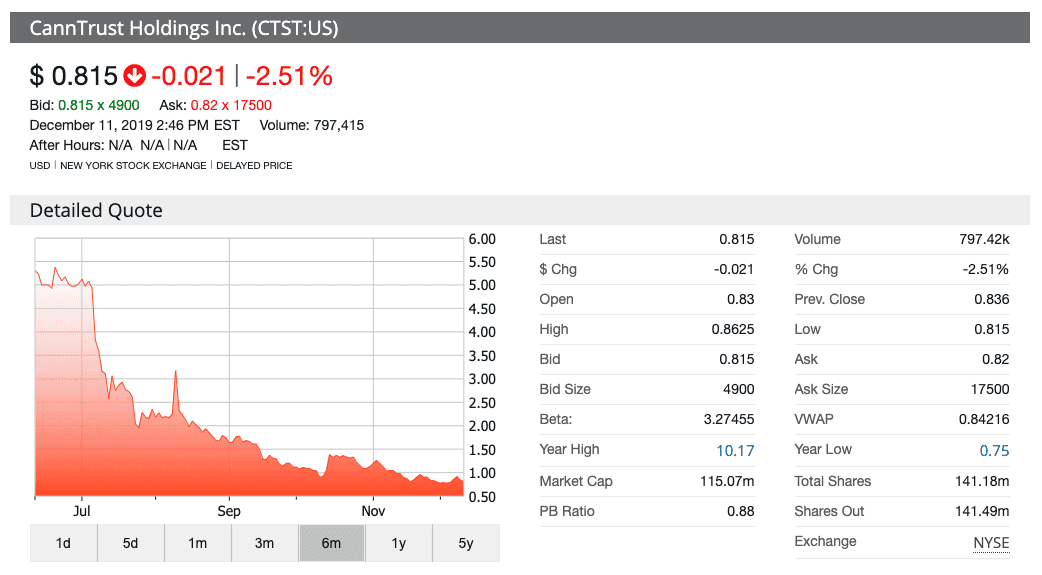 In the ensuing fallout, it was found that high-level executives, including former CEO Peter Aceto and former Chairman Eric Paul, knew about the illegal growing, which led to their departures from the firm.

In the months following the discovery, a second of CannTrust’s facilities was found to be non-compliant. Additionally, Ontario’s provincial cannabis retailer returned millions of dollars worth of CannTrust products and the company had its production license suspended by the federal regulator.

Since the initial non-compliance rating in July, CannTrust shares have plummeted almost 80 percent in New York and Toronto.