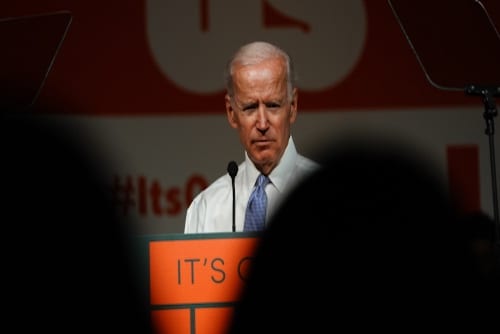 Democratic presidential candidate Joe Biden says he’s not ready to support the legalization of cannabis since it might be a gateway drug.

Joe Biden has separated himself from the pool of Democratic presidential hopefuls by reinstating his skepticism of cannabis legalization in the US.

During a town hall meeting in Las Vegas, Nevada, on Saturday (November 16), a voter asked the leading democratic candidate if his stance on recreational marijuana has changed, to which Biden replied by saying it has not.

Biden said he supports the right of states to determine the legal status of the drug, but said his main point of hesitation lies in the lack of research associated with cannabis.

“The truth of the matter is there’s not been nearly enough evidence that has been acquired as to whether or not it is a gateway drug,” he said at the event.

WATCH: @JoeBiden on marijuana legalization – "There is not nearly been enough evidence…as to whether or not it is a gateway drug," he said last night, "It’s a debate." Biden said states should decide on legalization & that he supports medical marijuana. @CBSNews pic.twitter.com/s4CE32phLS

Biden said that — if elected — he would change the current scheduling of marijuana so the needed research can be completed.

“It’s a debate and I want a lot more before I legalize it nationally; I want to make sure we know a lot more about the science behind it,” he said.

Experts in the marijuana market expect that legalization of the plant and the precise method to do so will be big topics of discussion in the upcoming election as the presidential race heats up.

According to FiveThirtyEight, the most recent national polling places Biden ahead of Bernie Sanders and Elizabeth Warren by small margins.

Biden is breaking off from his fellow candidates in the Democratic race, who support marijuana legalization. However, the former vice president did say he supports medical use of marijuana.

He also decried the criminal penalties seen from marijuana use in the US.

“It should not be a crime, it should be a civil penalty to the extent that it exists in states that don’t choose to legalize,” he told the audience.

The Trump side of US marijuana picture

While US President Donald Trump has expressed views in support of marijuana, his administration started off its relationship with the marijuana industry on the wrong foot — mostly due to the actions of previous Attorney General Jeff Sessions.

During a conference in June, Vivien Azer, an analyst with Cowen (NASDAQ:COWN) who covers marijuana stocks, offered a prediction on how exactly Trump may tackle the issue of marijuana legalization.

“We think that the administration could very well (do it) … it really just comes down to timing,” Azer said.

The analyst explained that Trump may hold off on moving forward with support for any sweeping policy to address the illegal status of the drug  — at least federally — until close to the election date, should his polling numbers trend down compared to the opposition.

During Trump’s presidency, the marijuana investment market has shifted dramatically, with interest moving to the burgeoning US market. Additionally, thanks to the signing of the 2018 farm bill by Trump, hemp and its derivatives — like cannabidiol (CBD) — have been separated from the federal block on cannabis, leading to a market rush for CBD products across the country.