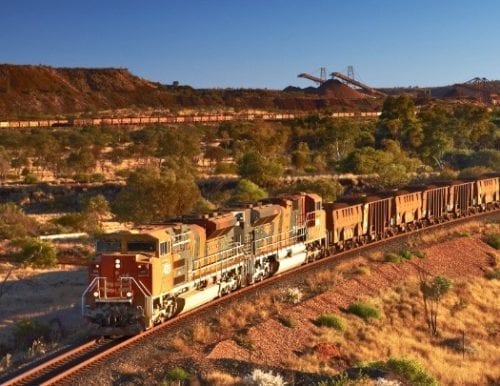 The first of three multi-billion dollar iron ore replacement mines announced earlier in 2018 is now underway, with works at BHP’s South Flank mine beginning this week.

The start of works at BHP’s (ASX:BHP,NYSE:BBL,LSE:BLT) soon-to-be shiny new iron ore mine in Western Australia began with not a bang, but a political pony show and a polite smattering of applause.

At the turning of the sod ceremony at the future site of the South Flank project in the Pilbara, Western Australian Premier Mark McGowan said that the AU$4.8-billion (US$3.4 billion) investment from the mining giant and its JV partners was a sign that the economy had “turned a corner” in the Australian state.

“It shows that there is confidence in Western Australia once again,” said McGowan.

The premier also took the opportunity to announce the government had now given all relevant approvals for the project, which BHP gave its own internal green light to last month.

With all the approvals in place, major construction works will now proceed on the project, which BHP alone will be spending US$2.9 billion on.

The Western Australian premier has plenty to be happy about, as South Flank is the first of three multi-billion dollar projects operated by majors across the Pilbara, which will deliver hundreds of millions of dollars in royalties into state coffers.

The Anglo-Australian miner has an 85-percent stake in the South Flank project, with the balance owned by Japanese conglomerates Mitsui (TSE:8031), which controls 7 percent, and ITOCHU (TSE:8001), which controls 8 percent of the project.

BHP said that South Flank will fully replace production from the 80-million-tonne per year Yandi mine, also in the Pilbara, with first ore expected in 2021 and an estimated mine life of 25 years.

The company also said in its quarterly report that the project would contribute to an increase in average iron grade from 61 percent to 62 percent from its Western Australian iron ore operations.

The miner has been moving pieces into place to ensure works proceed on time, with a AU$176-million contract awarded to NRW Holdings (ASX:NWH) for bulk earthworks and concrete works commencing in September this year.

South Flank is just one part of a BHP’s long-term plans for iron ore mining in the Australian state, having recently received a nod from the Environmental Protection Agency (EPA) for up to a century’s worth of environmental assessment approvals.

On the Australian Securities Exchange, shares of BHP were up 2.24 percent, closing at AU$33.75 on Wednesday (July 25).

One response to “Ready, Set, Go: First Iron Ore Replacement Mine Gets Underway”