Investing News Network
KLab Inc., a leader in online mobile games, announced the release of the new "aoppella!?" project original song "Little Real Happy!" on the official YouTube channel on Thursday, November 30 . See the original press release for more information. The new original song "Little Real Happy!" was written and arranged by Yosuke Hikichi and Reo Tsuchiya members of the a cappella band RAG FAIR, and performed by the Otowa ...

The new original song "Little Real Happy!" was written and arranged by Yosuke Hikichi and Reo Tsuchiya , members of the a cappella band RAG FAIR, and performed by the Otowa Public High School a cappella club Lil Happy.

"Little Real Happy!" is a perfect song for the winter season. Listeners will find themselves snapping and moving along to the comfy rhythm while the members of Lil Happy sing their hearts out. Watch as the boys enjoy the illuminations and snowy scenery while dressed casually for the cold. We hope this song from Lil Happy brings you joy this holiday season.

"aoppella!?" is KLab's latest original multimedia music project built on the themes of "youth" and "a cappella".

*All other trademarks or registered trademarks are the property of their respective owners.

Growing extremely fast, the online gambling market breaks more and more records. Combined with smart crypto solutions, the industry opens up new opportunities for operators and players. Observing the expansion of the crypto space, BGaming highlights the most significant trends that influenced the iGaming industry. 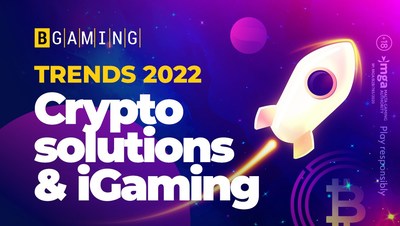 Engaging mechanics . The changing market requires iGaming providers to be innovative and flexible. The growth of crypto gambling lead to new trailblazing mechanics. One of the examples is "crush". With the multiplayer mode, this kind of game gained popularity quickly and remains in demand among operators and especially crypto players.

Space XY by BGaming is a crash multiplayer game that recently appeared in casinos worldwide. The game has become a part of a game package for crypto projects.

"We see that crypto projects are an integral part of online gambling. Space XY is not just a new popular crash game. It opens for us a whole new horizon of multiplayer mechanics games that will rock in upcoming years!" noted Kate Puteiko, CS Marketing Manager at BGaming.

Simple yet eye-catching . The crypto boom brings new vision to the game design making hypercasual style hyper-popular. The super-simple interface combined with uncomplicated graphics makes the game fast and convenient for any device.

Provably Fair . The algorithm based on cryptography allows players to verify the game's results, making online gambling safer. According to statistics, Provably Fair games save top positions much longer than others. BGaming was the world's first to offer a unique verification system for online slots. It helped to increase the players' loyalty to online casino games.

"BGaming's Provably Fair system unites the best aspects from the existing alternatives. We wanted to offer something extra besides the games, and we were smart enough to adjust our system to the best user experience," commented Marina Ostrovtsova, Director at BGaming.

All kinds of content for crypto casinos, the interest in which is growing, will be for sure in the spotlight of iGaming providers in 2022.

"We're working on a package of crypto dice games and will offer operators new versions of Plinko , Rocket Dice, Head & Tails. We strive to meet all the market tendencies, and we see that these products will be in demand," highlighted Alexandr Shavel , Head of BizDev Department at BGaming.

Internet Vikings moves further into the U.S. iGaming market as they launch in Illinois

Internet Vikings has long been considered one of the top iGaming hosting service providers in Europe . They began their pivotal expansion into the U.S. in July last year. Having already established a firm position in 17 other states, their assertive and bold project to offer the finest in bespoke iGaming hosting solutions across the country is fast becoming a reality. The company has begun to see the fruits of its efforts in states like West Virginia Colorado and New Jersey where they have already attracted various clients.

Home to the iconic city of Chicago, Illinois boasts the fifth-biggest GDP in the country as well as the 6th largest population for a state. Though a latecomer to the party, it is rapidly picking up its pace as it looks to open up to various forms of online gaming, having begun with online sports betting in 2019. Seeing the radical success of online betting in the Garden State in the short time since it was legalized, has spiked a big move towards full regulation in Illinois .

First idle-genre mobile game inspired by the action-adventure classic. Revisit iconic moments from the series and explore original tales set in the Who-niverse.

East Side Games Group (TSX: EAGR) (OTC: EAGRF) (" ESGG " or the " Company "), Canada's leading free-to-play mobile game group, has entered into a multi-year partnership with BBC Studios, for the worldwide release of a mobile title based on the Doctor Who franchise. The game will be available in 2022 on both iOS and Android.

Guild Esports (LSE: GILD) (OTCQB: GULDF), a global teams organisation and lifestyle brand, is pleased to welcome Bitstamp, one of the world's longest-running crypto exchanges, as the Company's exclusive Official Cryptocurrency Exchange partner with the signing of a three-year global sponsorship deal for £4.5 million.

The sponsorship will commence on 29th January 2022 . This is the largest sponsorship deal secured by Guild Esports in its history and will generate annual revenues of £1.5m over the three-year period.

UMG for Brands, Republic Records and Capitol Music Group led a year-long partnership with the Pokémon Company International team and its partners to celebrate the 25th Anniversary of the iconic video game and entertainment franchise beloved by millions of fans of all ages around the world by releasing hit singles, music videos, an AR concert, exclusive merch, and branded content.

The "always on" year of programming supported the worldwide release of Pokémon 25: The Album, which to date has garnered over 180 million streams and 320 million video views. The efforts exerted by the entire UMG for Brands team, led by Bridget Ferris , Vice President, UMG for Brands, was recently recognized with seven CLIO Global Entertainment Awards wins.

"I couldn't be more proud of the recognition by the CLIO Global Entertainment Awards for our team's passionate and innovative work this year on the Pokemon campaign," said Richard Yaffa , Global Head of Universal Music Group for Brands. "Our award-winning partnership with Pokémon was just one of many that we led this past year and underscores our strategy constantly identifying, developing and creating activations that authentically connect brands with their target consumers."

UMG for Brand's awarded works include:

About Universal Music Group for Brands
Leveraging the power of music and culture to accelerate business, UMG for Brands offers a unique global approach to making brands culturally relevant and brand marketing, with teams in 74 countries. Whether a brand is looking to shift perception, reach a new generation, boost sales or build loyalty; UMG for Brands helps define a brand's authentic voice in culture. Recent CLIO and Cannes Lions wins are a testament of the true synergy that can be achieved between culturally relevant artists and brands.

About Universal Music Group
At Universal Music Group, we exist to shape culture through the power of artistry. UMG is the world leader in music-based entertainment, with a broad array of businesses engaged in recorded music, music publishing, merchandising and audiovisual content. Featuring the most comprehensive catalogue of recordings and songs across every musical genre, UMG identifies and develops artists and produces and distributes the most critically acclaimed and commercially successful music in the world. Committed to artistry, innovation and entrepreneurship, UMG fosters the development of services, platforms and business models in order to broaden artistic and commercial opportunities for our artists and create new experiences for fans. For more information, visit www.universalmusic.com .