TSXV:NRG ) (OTC :NRGOF ) ( Frankfurt:X6C) Newrange Gold Corp. (" Newrange " or the " Company ") is pleased to provide further details on the upcoming drill programs on its 100% owned North Birch and Argosy Gold Mine Projects northeast of Red Lake, Ontario.  At least 4,000 metres will be drilled, split roughly evenly between the two projects, starting at North Birch in early February

"We believe that Newrange's winter drill program on its North Birch and Argosy Gold Mine Projects will be the largest in the Birch-Uchi Belt this year, outside of the nearby Springpole Deposit," stated Robert Archer, Newrange's President & CEO.  "Our two projects complement each other very well in that Argosy, being the largest past-producing gold mine in the belt, has known gold mineralization that is open to depth, while North Birch holds the ‘blue sky' potential for a significant new discovery."

Iron formation hosted gold deposits occur in Precambrian rocks throughout the world and the 3,850-hectare North Birch Project encompasses a folded and sheared iron formation (see Figure 1 ) that is structurally similar to Newmont's Musselwhite Mine, 185 kilometres to the northeast and the largest of this class of deposits in Canada, with past production and reserves exceeding 7 million ounces (Ontario Geological Survey and Newmont Corporation).  The LiDAR survey that was flown over the North Birch Project last summer highlights a very clear break between two topographical domains that is interpreted to reflect a shear zone (see Figure 2 ) that follows exactly along the trace of the main fold limb of the iron formation and is at least eight kilometres long.

While iron formation can be an excellent physical and chemical trap and remains the primary target, structure is the key to gold mineralization and adjacent rock types may also be mineralized.  This is the case in the Pickle Lake District, in the next greenstone belt to the east of Birch-Uchi, which contains several deposits hosting gold in iron formation and adjacent rocks and has collectively produced 2.9 million ounces of gold since 1935 (MNDM archives).  Both the magnetic and LiDAR surveys at North Birch highlight other structures on the property that will require future follow up.  Although gold mineralization is known elsewhere on the property, the main iron formation horizon has never been drill-tested as it lies under cover.

At present, five holes are planned along approximately three kilometres of strike on the main target horizon.  Additional holes will depend on the results from this first pass. 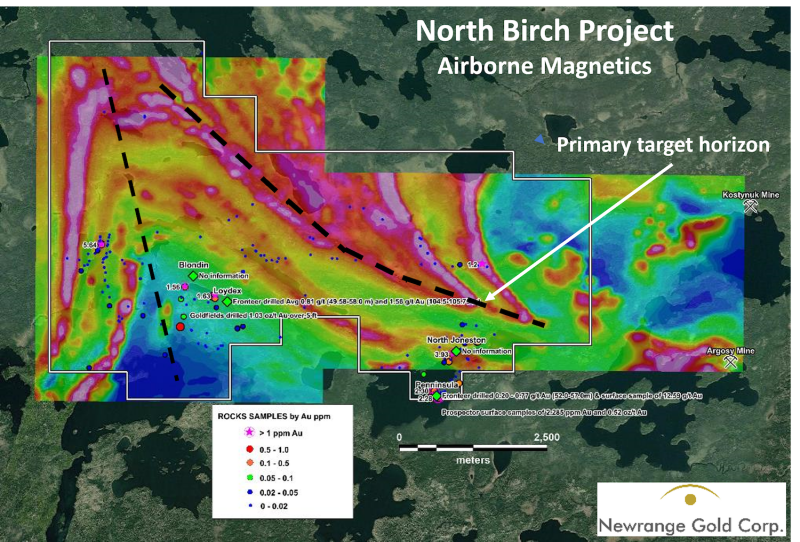 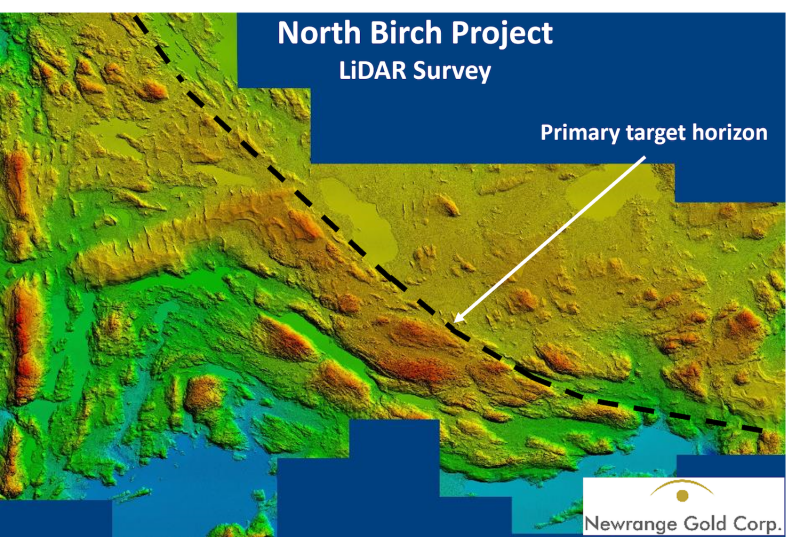 On the Argosy Gold Mine Project, the focus for the upcoming drilling will be on testing the depth extent of known veins below the historic mine workings and testing for continuity on certain other veins that were not previously mined.   A total of 101,875 ounces of gold was produced at a grade of 12.7 g/t between 1931 and 1952.  Production came from two inclined shafts on multiple levels but only to a maximum vertical depth of 900 feet (274 metres).  Holes drilled in 2003-04 intersected gold mineralization to a vertical depth of 400 metres, including 10.46 g/t Au over 2.98 metres and 14.15 g/t Au over 1.65 metres, indicating that mineralization continues to depth.

Although no detailed production data exists, the Company has compiled information from 72 historic drill holes in conjunction with outlines of the underground mine workings to complete a preliminary 3D Leapfrog model (see Figure 3 ) that is being used to assist in planning the upcoming drill program.  Further details on the planned holes will be provided once the process is complete.

Figure 3:  3D Leapfrog Model of the veins and historic underground workings on the Argosy Gold Mine Property.  Click here to see a short video representation.

The technical content disclosed in this press release was reviewed and approved by David Hladky , P.Geo., Senior Geologist for Newrange and a Qualified Person as defined under National Instrument 43-101.

Newrange is focused on district-scale exploration for precious metals in favorable jurisdictions including Nevada and Ontario.  The Company's Pamlico Project in Nevada contains a large-scale multi-phase polymetallic mineralizing system with multiple gold and copper targets spread over more than 5,700 hectares.   In the prolific Red Lake District of northwestern Ontario, the past-producing high-grade Argosy Gold Mine is open to depth, while the adjacent North Birch Project offers additional blue-sky potential.  Focused on developing shareholder value through exploration and development of key projects, the Company is committed to building sustainable value for all stakeholders.  Further information can be found on our website at www.newrangegold.com .

Neither the TSX Venture Exchange nor the Investment Industry Regulatory Organization of Canada accepts responsibility for the adequacy or accuracy of this release .

Some of the statements in this news release contain forward-looking information that involves inherent risk and uncertainty affecting the business of Newrange Gold Corp. Actual results may differ materially from those currently anticipated in such statements.

VANCOUVER, BRITISH COLUMBIA TheNewswire - May 17, 2022 (TSXV:NRG ) (OTC :NRGOF ) ( Frankfurt:X6C) Newrange Gold Corp. (" Newrange " or the " Company ") is pleased to provide an update on its exploration projects in the Red Lake District of Ontario and the Walker Lane Trend of Nevada.

TSXV:NRG ) (OTC :NRGOF ) ( Frankfurt:X6C) Newrange Gold Corp. (" Newrange " or the " Company ") announces that, further to its news release dated February 24, 2022, the Company has extended its non-brokered flow-through and non-flow-through private placement for aggregate gross proceeds of $2 million (the "Offering") until April 13, 2022

VANCOUVER, BRITISH COLUMBIA TheNewswire - March 9, 2022 (TSXV:NRG ) (OTC :NRGOF ) ( Frankfurt: X6C) Newrange Gold Corp. (" Newrange " or the " Company ") is pleased to announce that the first diamond drill hole on the Primary Target Horizon ("PTH") at the 100% owned North Birch Project has confirmed the presence of a strong deformation zone, well in excess of 100 metres wide, as originally interpreted from the geophysics (see Figure 1 ).  The sheared and folded basalts and iron formation ("IF") also display moderate to intense carbonate alteration and local quartz veining.  Pyrite and pyrrhotite mineralization occur as disseminations, stringers and, locally, as ‘clots' within quartz veins and veinlets.

TSXV:NRG ) (OTC :NRGOF ) ( Frankfurt:X6C) Newrange Gold Corp. (" Newrange " or the " Company ") is pleased to announce the closing of the first tranche of a non-brokered private placement for gross proceeds of $408,100 consisting of 5,830,332 non-flow-through units (the "NFT Units") at a price of $0.07 per unit.  Each NFT Unit consists of one common share of the Company and one-half share purchase warrant (each whole share purchase warrant, a "NFT Warrant").  Each NFT Warrant entitles the holder thereof to purchase one common share at an exercise price of $0.12 at any time until February 23, 2024.  Proceeds will be used for general working capital and for continued surface exploration on the Pamlico project in Nevada

VANCOUVER, BRITISH COLUMBIA TheNewswire - February 17, 2022 (TSXV:NRG ) US (OTC :NRGOF ) ( Frankfurt:X6C) Newrange Gold Corp. (" Newrange " or the " Company ") is pleased to announce that diamond drilling has commenced on its 100% owned North Birch Project in the Birch-Uchi greenstone belt northeast of Red Lake, Ontario.  Approximately 2,000 metres are planned, with the first five holes testing a three-kilometre strike length of the main target horizon, interpreted to be a sheared limb of a folded iron formation (see Figure 1 ).

Gold has diverse uses, and throughout history it has been widely used in art, jewelry and technology.

But the precious metal has also long been considered a safe haven, and as a result many investors turn towards it during tough political and economic times. Physical gold bullion coins are a common way to get exposure, but other ways to jump into the space are exchange-traded funds (ETFs), gold futures, options and gold company stocks.

Gold is arguably a solid long-term investment, so those new to the sector will be curious to know more about the yellow metal before jumping into the market. Here are five basic facts about gold that all investors should know.

Gold79 Mines CEO: We very much believe in the potential of Gold79 is and how good our projects are.youtu.be