Investment in new oil fields has not been robust; when the current overcapacity is sucked up, the gap between supply and consumption will narrow again, forcing prices up. On that thinking, $75 per barrel can look like a good bet. Juniors lead the way! 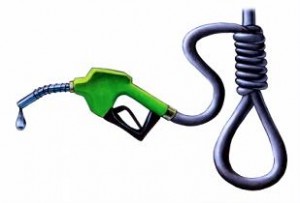 Oil-price forecasting is not for the humble. The oil market has often made very smart people look pretty stupid. And it is common for several smart people to look at the exact same data and then arrive at opposite conclusions.

Take for instance some biggies: Philip Verleger, a Colorado-based oil-price analyst, is predicting that prices could dip to the $20 range this year; Goldman Sachs, meanwhile, puts the figure at $85, considerably more than its December guess of $45, but well below its May 2008 prediction of a spike to $200. T Boone Pickens estimates a 2009 average price of $75 and Morgan Stanley, $60.

Investment in new fields has not been robust; when the current overcapacity is sucked up, the gap between supply and consumption will narrow again, forcing prices up.

On that thinking, $75 per barrel can look like a good bet. “Over the last six months, crude-oil futures have been a proxy on economic growth six months out,” concludes Tom Kloza, publisher of Oil Price Information Service, a newsletter that tracks the oil market.

Adds Kenneth Medlock, an energy economist at the Baker Institute at Rice University in Houston, “In today’s world, oil-price dynamics are different than even 10 years ago.”

True, but prices are not just curious; they are wild. From 1999 to 2004, the biggest difference between the high and low price in any given year was $16; from 2005 on, the average variance was $52; but in 2008 it was $115. Oil, of course, is not the only commodity that has been frisky; copper has been even more so this year, leaving investors confused.

Not to forget, investment in commodity indexes, which are heavily weighted in oil, has also risen sharply, from about $15 billion in 2003 to $200 billion last year. And given the relationship between increased investment and increased volatility, speculators are indeed making a big difference in the oil market.
Politicians too are concerned that high oil prices could hurt their countries’ economic recoveries. To stem the worry, in late July, the U.S. Commodity Futures Trading Commission held hearings on what, if anything, to do about that. The CFTC is considering new rules for the oil markets.

Oil is globally traded, dollar denominated, and there is a lot of it. What has happened is that it has become, in effect, a financial instrument, being used as a hedge against both a falling dollar and inflation. If the dollar weakens, a trader can make money just by keeping the rights to a barrel and selling it as the greenback sinks.

So where do we go from here? Invest in juniors.

Higher oil prices are set to help junior oil producers and other development-stage exploration companies, some of which are being eyed by investors.

American Petro-Hunter is one junior oil producer that is set to see strong growth the next few years, given its prospects in Kansas and California, if oil prices continue to rise higher, state analysts.

Often times, junior oil producers and development-stage companies trade at low multiples that can rapidly expand when they reach profitability – and higher oil prices can help the process along.

FBR Capital upgraded Rosetta Resources to Outperform on valuation and believes drilling results in Q3 and Q4 should serve as near-term catalysts. The firm raised its target on shares to $15.

Then there is Great Plains Exploration Inc (GPX:TSX) which has completed a number of major acquisitions, including the purchase of RedStar Oil & Gas Inc in May 2008 for an effective price of $29.0 million.

Through its inventory of high impact projects and behind pipe volumes, Great Plains continues to offer growth. The company recently tested a 40 per cent interest oil well that flowed at rates of up to 2,222 boepd with estimated reserves of 2.3 million barrels of light oil.

The company has identified 27 drilling opportunities and has 32 additional contingent locations in inventory. Great Plains’ net asset value was estimated to be $95.4 million at year-end.
Rock Energy (RE-TSX) and Petrobank Energy (PBG-TSX) each announced their first quarter results in May. Both met or exceeded expectations, as oil prices were better than expected through March. Both companies simply continued doing what they have done the last year – find oil cheaply and extract it profitably.

Heavy oil prices in particular remained strong for Rock, making them one of the most profitable junior oil and gas companies, per barrel of oil, on the Toronto Stock Exchange, state analysts.

Rock showed a netback of $14 per barrel, and National Bank research estimated finding costs of $7. This is what makes it one of the most profitable junior energy companies on the TSX – with these low energy prices, almost nobody is making 2:1 recycle ratios.

Management will drill eight more heavy oil wells this year, and no gas wells. Should heavy oil prices continue to be high, analysts say this could increase later in the year. But they add that the firm is focused on acquisitions, as they are as cheap as or cheaper than drilling.

Investors are only slowly discovering this cash flow story. Rock’s production is 40 per cent heavy oil, 10 per cent light oil and 50 per cent natural gas. Natural gas prices remain low, and as most Canadian junior and intermediate producers are more heavily gas weighted, their cash flows are comparatively much weaker than at Rock. Cash flow is definitely helped by a $150,000 credit from the Alberta government for their heavy oil wells.

Petrobank, on the other hand, also held steady.

The rider. Of the 63 public junior oil and natural companies operating in Western Canada, only six reported profits for the first quarter of 2009. Meanwhile, 10 of the 23 intermediates in the sector reported profits. This is a sign that the costs of Canadian oil and gas production – including finding, development and acquisition costs that are written down over time – are currently too high for the revenue being brought in.

Moreover, with Canada’s oilsands expecting to play a critical role in meeting a growing need for energy in Asia and the world, corporates have urged both the industry and governments to promote the fuel source.

Peter Voser, Shell’s new chief executive, said crude from Alberta’s oilsands could be taking a more international role in energy markets as pipelines to the West Coast and Asia Pacific markets are developed.

Stating that critics are winning the war, he said the world would need the oil produced from Canada’s oil sands but the country’s government and oil industry have failed to make a case for exploiting the resource.

Speaking at a Calgary, Alberta, conference, Voser added that Canada’s oil sands reserves of up to 175 billion barrels are a welcome addition to North America’s energy supply. “Today, oil sands bitumen production stands at 1.3 million barrels a day. The US Energy Information Agency believes that, by 2030, oil sands could account for around 6 per cent of global non-OPEC oil supply.”

The oil industry itself has been experiencing a bit of turbulence during the past few years, with crude prices experiencing rapid triple-digit price swings. However, the long-term fundamental picture remains the same, with demand expected to rise as the economic crisis subsides and economic stimulus packages go into effect in various countries around the world.

In the short-term, however, oil prices have fallen to approximately $71.50 per barrel on concerns that gasoline demand will decline as a result of increasing unemployment in the United States. Meanwhile, many oil traders are closely watching new regulations designed to decrease price volatility in the oil markets by imposing large fines on those abusing the system.

There are three catalysts for higher oil prices. Many analysts believe that oil prices will rise in the long-run for a number of reasons. Firstly, several developing countries are beginning to see an improvement in gross domestic product per capita, and as a result, more demand for automobiles and oil-supported infrastructure. For example, China’s auto industry grew 351 per cent since the turn of the millennium in 2000.

Finally, instability in the Middle East is another major factor behind a rise in oil prices. Conflict-ridden countries like Iran and Iraq control a large amount of the world’s oil supply, while the OPEC cartel is beginning to improve its control over supply to meet its desired pricing. With more trading regulations, it is likely that these prices will be even more sustainable.