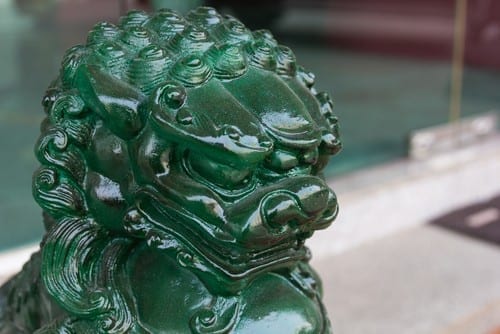 Stellar economic growth is leading to the rebirth of China’s jade market.

China’s jade market is benefitting greatly from a wealthier middle class with an increased appetite for the nation’s most revered commodity.

More than diamonds or rubies, emeralds or sapphires, for several millennia the most prized gemstone in Chinese culture has been jade, worshipped as the stone of Heaven — a bridge between the physical and spiritual worlds. The stone appears in a number of ancient Chinese world creation stories. A symbol of virtue and spirituality that could ward off evil and protect health, jade also denotes wealth and status, as can be seen in the striking similarity between the Chinese characters for jade and emperor. In fact, jade has long been associated with imperial power. Emperors and members of the imperial family and upper ranks were often buried in suits and coffins made of jade.

The stone is highly durable, carvable and available in a beautiful spectrum of color, making it an attractive material for use in various works of art from jewelry, vases and life-size buddha statues, to carved screens, furniture inlays and even architecture. Jade is found in two varieties, nephrite and jadeite, which to the untrained eye are nearly indiscernible from each other. Nephrite exists in a variety of colors, including black, white, blue and numerous shades of green. While jadeite also exists in a range of colors, it is best known for its “imperial green” color. Nephrite was the more commonly used form in China before the introduction of jadeite from Myanmar in 1784.

Most recently, China’s veneration for jade was on display in the 2008 Beijing Olympics, where three different shades of the stone were used in the bronze, silver and gold medals presented to winning athletes.

Following the fall of the Qing dynasty, China’s dark days of economic depression during much of the 20th century brought the global jade trade to a near halt. As China strengthens its position as one of the most powerful world economies in the 21st century, however, jade is quickly regaining its status as one of the country’s most valued commodities. This is having a dramatic impact on demand. “More jade has been carved this century than in the rest of human history combined,” notes Andrew Shaw, master jade carver in Suzhou, China.

All across China, multiple sales channels for the stone are growing, including jade exhibitions, auction houses, wholesale trading centers, large retail spaces and online sales. According to estimates based on auction prices from master carvers, state sales and major auctions, China’s nephrite jade market in 2016 was pegged at US$30 billion.

Unlike with diamonds and precious metals, there is no international pricing system for jade. Outside of public auctions, prices are set in private transactions between the seller and the buyer, meaning the value of jade can vary dramatically. For example, the price of nephrite jade from Canada ranges between C$90 and C$910 per pound, while prices for Russian sources are ranging between US$227 and US$900 per pound. In China, top end white nephrite, known as ‘mutton fat’, has been previously sold for US$68,000 per pound. Often the price is determined by the unique qualities of each piece, which considers four main factors: color, translucency, size and workability.

While the uniqueness of each piece makes it difficult to set a firm price for the entire market, those in the industry have witnessed prices rising dramatically as more and more Chinese investors see the value in jade as an alternative asset class. “Due to the strong demand for jade in China, the price has increased manifold in the past decade,” said Lay Soo Yuen, a gemologist certified by the Gemological Institute of America who specializes in the sale of ornamental jadeite jewelry. “Individuals who buy jade for investment are usually those who already invest in traditional asset classes such as equities and bonds. They look to jade when they seek to expand their investment horizons.”

Jade has shown itself to be a lucrative investment, as The Edge Markets points out; a Cartier jade necklace once belonging to American heiress Barbara Hutton sold at a Sotheby’s Hong Kong auction in April 2014 for US$27.44 million — more than six times what it sold for in 1994.

For much of the modern era, China’s economic doldrums resulted in low demand for jade and even lower investment in the exploration and development of jade deposits, leaving much of today’s production coming from artisanal scale mining. Growth in China’s jade market will be highly reliant on the development of new, commercial-scale mining projects, as traditional sources are depleted.

Jade’s high value is also due in part to its geological formation in subduction zones — like the Pacific Ring of Fire — far from surface, making it extremely hard to locate. However, in some regions like BC it can be found in alluvial deposits in rivers and streams much like gold. In fact, BC is one of the world’s most economically important sources of jade. Reportedly, there are more than 50 nephrite jade occurrences in BC, which are found along the Cordilleran belt that extends from Alaska to California. Russia is home to significant jade resources as well, however they are typically located in the remote region of Siberia, which makes extraction quite challenging.

Another major source is Myanmar, which controls approximately 90 percent of the world’s supply of jadeite. In 2016, miners discovered a giant 192-ton jade boulder worth an estimated US$170 million in Myanmar. However, the jade trade in the Southeast Asian nation has been likened to the nefarious African blood diamond trade, with reports that money from jade mining in the northern state of Kachin may be helping to finance ethnic conflicts and fuel a heroin epidemic in the region.

The growing call for ethically sourced jade is leading customers to request that the origin of gems be tested in a lab before purchase. Such a trend is likely to result in higher demand for conflict-free sources of jade, such as BC and other emerging sources in North America.

Jade Leader (TSXV:JADE) has a portfolio of six prospective nephrite jade projects located in both Canada and the United States, including its flagship property the DJ project in the state of Washington, and four recently acquired projects in the historical Jade Fields of Wyoming. With a maiden drill program completed in 2018, the DJ project is the only drill-tested, confirmed jade asset known and held by a public company anywhere in the world today.

“Jades, ranging from foliated to massive material suitable for carvings and jewelry as well as finer and more uniformly colored light green to blue with higher translucency referred to as near gem/gem type were represented across the width and depth of the occurrence which remains open in all directions,” stated Jean-Pierre Jutras, President and Director of Jade Leader in regards to the company’s early 2019 drill results. Samples from both drill core and surface are being analyzed to test workability, color, texture and translucency in preparation for display at the Zi Gang Bey Jade carving competition and trade show this April in China.

Jade has long played an integral role in Chinese culture and its intrinsic social value has the power to create significant investment value today and in the future. China’s powerhouse position on the global economic stage coupled with a lack of large-scale mining projects is a natural recipe for a high-price environment. We may be in the early days of a strong bull market for the Stone of Heaven, and those who can deliver new sources of this material.

Tags: nephrite jade
×
See our exclusive index of companies on the move
EXPLORE
Tweets by INN_Diamond