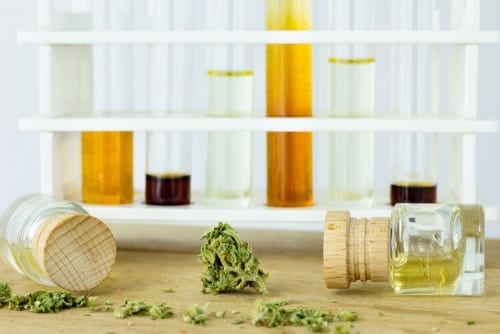 In the era of legal cannabis, using cannabinoids for pain management has gone mainstream.

One of the main side effects of cannabis legalization will hopefully be a better public understanding of how cannabis works with the human body and how using cannabinoids for pain management could be an alternative to current solutions.

Cannabinoid use for pain relief is not a new concept, but in recent years we’ve seen an explosion in the development of new methods for using cannabinoids in ways to more effectively treat pain while limiting psychoactive effects on cognitive function. The general public has taken notice and the stigma associated with taking medical cannabis is rapidly dissipating as more people see cannabis as a desperately needed alternative to opioid medications.

Today, cannabinoid based medicine is being utilized by a wide range of people from pro athletes for injuries and soreness to the general public for any number of other painful conditions and ailments.

Cannabinoids and the endocannabinoid system

Put very simply, the endocannabinoid system manages a number of important functions for the human body including pain-sensation, memory, mood and much more. It’s also the system that allows cannabinoids to do their thing. It does this through a series of cannabinoid receptors found throughout the brain and nervous system known as CB1 and CB2 receptors. The body naturally produces chemical compounds known as endocannabinoids that react with these receptors to maintain homeostasis, a state of internal hormonal balance to counteract the fluctuating conditions of the external environment.

Of the hundreds of cannabinoids that have been identified, the best known and understood are CBD and THC. These two cousins react with the endocannabinoid system in very different ways. The main functional difference between the two is that THC binds with both the CB1 and CB2 receptors while CBD does not bind with CB1 receptors. CB1 receptors are mostly found in the brain, which is why THC has that characteristic psychoactive effect that we associate with cannabis. CBD, on the other hand, interacts with receptors indirectly, affecting the way other compounds interact with the receptors and increasing the body’s production of naturally-produced endocannabinoids.

Nearly a century of prohibition has kept cannabinoids out of the hands of researchers and set back our understanding of the therapeutic potential of cannabinoids dramatically, but the growing body of evidence supports cannabinoids as a viable treatment for pain.

With more jurisdictions legalizing and creating new legal cannabis markets, the global market for medical cannabis products is growing rapidly. According to a November 2018 report by Research and Markets the global medical cannabis market is projected to hit $37 billion in 2023, up from $11 billion in 2017. That’s a staggering 22 percent compound annual growth rate over seven years. Because the needs of medical users differ greatly from the preferences of recreational users major cannabis producers like Aurora Cannabis (TSX:ACB) and smaller players are investing millions into new and innovative medical products in order to meet the increasing demand from consumers seeking an alternative to opioid-based pain relief.

The world of professional sport has provided an arena for using cannabinoids for pain management and relief. So far these developments have focused mainly, but not exclusively, on CBD medicine, though athletes have been using THC for pain relief in unofficial capacities for some time. Studies and anecdotal evidence show the CBD’s anti-inflammatory properties could make it a useful tool for athletes looking for relief from soreness, muscle and joint damage or injuries that won’t affect physical or cognitive performance like many opioid medications or THC-rich cannabis.

UFC mixed martial artist Nick Diaz was famously seen vaping CBD oil during his post-match press conference after his 2016 loss to Conor McGregor. Diaz explained to the press that the oil was for post-fight muscle inflammation. The event caused controversy in the sport world at the time, but CBD was removed from the International Olympic Committee sanctioned anti-doping agency’s list of banned substances less than a year later. Other athletes including NFL linebacker Derrick Morgan and former tackle Eugene Monroe have also gone public with their use of CBD to treat sport-related ailments.

The growth of the medical cannabis market has caused the emergence of a number of CBD players. NanoSphere Health Sciences (CSE:NSHS) is one such company. NanoSphere has been working on developing transdermal technology that improves the bioavailability of cannabinoids as they move through the bloodstream. The company’s Evolve Formulas Transdermal NanoSerum™ CBD utilizes a combination formula of synergistic cannabinoids, with each precision-metered dose containing 15mg of CBD and 1.5mg of THC. According to NanoSphere, this ‘nano-particle delivery’ technology will allow for more accurate dosing, making cannabis products more viable prescription options for health professionals.

Phivida Holdings (CSE:VIDA) is another medical cannabis company developing products for pain relief. In addition to other offerings, Phivida has developed a line of protein shakes aimed at the sports-oriented market and infused with a proprietary CBD blend designed specifically to aid muscle and joint repair and relieve post-workout pain and inflammation. Matica Enterprises (CSE:MMJ,FWB:39N,OTC Pink:MQPXF) is developing a topical time-release THC/CBD cream that medical cannabis patients that can be used to manage for pain management along with other ailments.

The pain relief pharmaceutical market is in desperate need of non-opioid based non-addictive pain relief options, and cannabis based medicine is poised to fill that void. As medical cannabis legalisation continues to spread across North America, Europe and beyond, the opportunities for companies developing these solutions continue to expand. Meanwhile growing understanding and acceptance of cannabinoid medicine spurred by high profile use in the professional sports industry and elsewhere will continue to open minds within these markets.