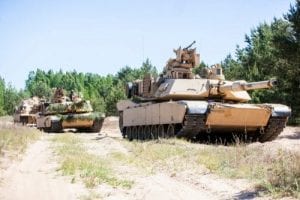 Aerospace and defense stocks in the US are on the up in 2019. Here’s a look at how to keep tabs on the industry.


Defense stocks globally have been trending upwards through 2019 due in part to heightened military tensions in the Middle East and elsewhere, and a United States president who strongly encourages allies to increase their defense spending while doing the same in America.

Of the 100 large defense companies in the world in 2017, 42 were identified as American, and those 42 firms accounted for 57 percent of sales. The next largest share — Russia — accounted for only 9.5 percent of sales. In a joint study and top 100 list, DefenseNews and the International Institute for Strategic Studies in London include just eight defense companies from China, America’s greatest rival.

Given the dominance of US defense stocks and their performance in 2019 year-to-date, the Investing News Network (INN) asked the experts about the best ways that investors can get involved in the market, and what they should be keeping an eye out for when they do their research.

Robin Lineberger, who is the global aerospace and defense industry leader at Deloitte, said to INN that defense stocks on the S&P 500 Index (INDEXSP:.INX) are outperforming the index overall.

There are a few reasons that can help explain the performance of the sector in the United States, including President Donald Trump, who has pushed for increased defense spending and a revitalized military within the US, and who has made a sustained campaign for allies in NATO to spend more cash.

Additionally, as is the nature of the defense sector, heightened military tensions in the Middle East and increasingly standoffish tactics in the South China Sea mean that companies that develop, manufacture and sell weapons of war are in demand.

How to get in on the industry

Lineberger said that, to do well in the industry, investors have to keep a close eye on the geopolitical climate as well as budgets from countries that spend big on defense projects.

“Government deficits may limit some countries from increasing their defense spending, impacting the sector and its stock performance,” he said.

He explained that the sector’s performance is often cyclical as it depends on government spending and budget releases, though heightened military activity and security threats keep it going.

For the time being, however, opportunities are broadly available across the sector, according to Peter Arment, senior research analyst in aerospace and defense at Baird. “Top names investors focus on are L3 Technologies (now L3Harris Technologies) (NYSE:LHX), Lockheed Martin (NYSE:LMT) and Northrop Grumman (NYSE:NOC), as well as smaller names like Mercury Systems (NASDAQ:MRCY) and Kratos Defense and Security Solutions (NASDAQ:KTOS).”

Mercury Systems specializes in defense electronics used in radar, electronic warfare and guidance systems, and has gains year-to-date clocking in at 55.92 percent, with the company trading at US$70.75.

Another advanced electronics company, Kratos’ gains on the NASDAQ are also significant, with the company up by 78.44 percent year-to-date at US$24.75. A major increase in the company’s shares came in early to mid-May, when it released its Q1 financial results, detailing revenues of US$160.4 million — up 12.2 percent over the same time period in 2018.

Lineberger said that, going forward, the industry is showing a lot of promise. “There are expectations that the US defense budget will likely remain strong, meaning most US defense contractors should see their revenue increase.

“However, some contractors may experience weaker growth depending on the specific programs they work on,” he continued. “So it is wise to closely monitor the program/contract wins — which defense contractor gains and which loses those contracts.”

As an example of that, American specialized truck and transportation company Oshkosh (NYSE:OSK) won the US military’s Joint Light Tactical Vehicle (JLTV) contract ahead of competitors like Lockheed Martin and AM General. AM General developed and produced the Humvee, which the JLTV will partly replace.

While Oshkosh won the contract way back in 2015, military procurement is a long-term process. The US military finally approved full production of the JLTV in June 2019. Tens of thousands of the JLTVs are expected to be produced for the US military, while a selection of US allies are putting in their own orders. The US Navy and US Air Force also have their own procurement plans for the JLTV.

How to watch the industry

Besides the above advice on following government budgets, contract competitions and program development, the fact is that the sector reacts to geopolitical developments and heightened military tensions, so savvy investors need to be watching closely.

“Whenever there is a significant geopolitical event (or) military aggression, defense stocks jump. We have witnessed it time and again,” said Lineberger.

Arment said that the industry “absolutely” responds to real-time events outside of budget cycles — though the cycles need to be watched, too.

“Real-time events are priced in immediately, so geopolitical events, budget changes or major mergers like L3 Technologies and Harris all get reflected in the stocks.”

Another factor to think about, said Arment, is the upcoming 2020 US presidential election.

“Presidential election polls in 2020 will become more important as the year begins and then it will be based on sentiment of policies continuing or potential for change.

“The latter will begin to impact the stocks as much as six months in advance, so there is still plenty of time, but it becomes headline risk as we enter 2020.”

While the election remains in its early stages with Trump launching his re-election bid on June 18, Democratic hopefuls have been multiplying throughout 2019, setting up for a grueling primary fight.

With the Democratic National Convention to take place in mid-2020, a clearer picture of Democratic policy direction will not be forthcoming soon.

Finally, Lineberger had tips on when the best time is to dive into defense stocks in the US.

“There is a lag between when money is appropriated by Congress and when it is actually spent by the military. So any correction due to any reasons or external factors is a good time to enter into defense stocks,” he commented.

Whatever investors take away from the sector as a whole, the numbers show that overall the US defense industry is performing very well in 2019. And with the US House of Representatives poised to approve US$738 billion in budgeting for the Pentagon in the 2020 fiscal year, it is seemingly on track to maintain that upward trajectory over the next few years.

Click here to learn more about the performance of US defense stocks so far this year.


Grab Your Free Report!
See our exclusive index of companies on the move
EXPLORE