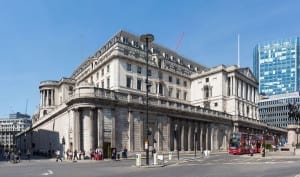 The Bank of England, among others, are adopting blockchain, also known as Distributed Ledger (DL) technology.

The Bank of England announced an upgrade to its payments systems that move over $600 billion a day for British banks and traders. By 2020, the Real-Time Gross Settlement (RTGS) system will be online 24/7. It is hoped that the change will boost defences against cyber crimes as well as allowing smaller players to sit at the table.
In his Mansion House Speech, the Governor of the Bank of England, Mark Carney, welcomed the exploration of FinTech innovators in order to enhance the future of central banking and distributed ledger technology. He did admit the amount of potential pitfalls: “However, the challenges facing such projects are legion, including reliability, resilience, security and scale. And fundamentally, how to prove technologies that are still nascent?” Ultimately the ledger is a memory bank that democratizes finance. Blockchain utilizes extraordinary technology to perform ordinary functions. Carney harked back to the ledger’s material origins, made from paper, stone or wood.
In his speech, Carney said a digital currency is on the cards, although a long way off; cash will still reign supreme for a while yet. This is the sort of headline news that will capture imaginations but Carney states that Britain will focus on processing payments more smoothly before championing cryptocurrencies such as bitcoins.

Give me my free report!
Why are big banks interested?
Carney’s speech revealed the BoE is working with other central banks. This is because blockchain would make contracts more enforceable and the settlement of stock trades quicker.
Swiss bank UBS (NYSE:UBS) is spearheading a group of banks working to create blockchain settlement systems. The idea took off with London-based blockchain company Clearmatics and has the backing of BNY Mellon (NYSE:BK). Deutsche Bank (NYSE:DB) and Santander (NYSE:SAN).
More banks were added to a blockchain initiative by financial innovation firm R3, pushing the full number to 22.
The World Economic Forum said in a report that 90 plus central banks are discussing the use of blockchain and foresaw 80 percent of the world’s commercial banks initiating projects using the technology as soon as 2017.

Give me my free report!
Don’t forget to follow us @INN_Technology for real-time news updates!
Securities Disclosure: I, Emma Harwood, hold no direct investment interest in any company mentioned in this article.