Bank of America Merrill Lynch looked at the implications of virtual reality and cited a 20-50 percent probability that humans are already living in a computer-simulated virtual world.

“Have you ever had a dream, Neo, that you were so sure was real? What if you were unable to wake from that dream? How would you know the difference between the dream world and the real world?” – Morpheus

Apparently, Bank of America Merrill Lynch analysts agree that there is a 50 percent chance we are living in The Matrix, and our world could just be a simulation.
A note issued to clients on Tuesday looked at the implications of virtual reality, and claimed, “Many scientists, philosophers, and business leaders believe that there is a 20-50 per cent probability that humans are already living in a computer-simulated virtual world.” 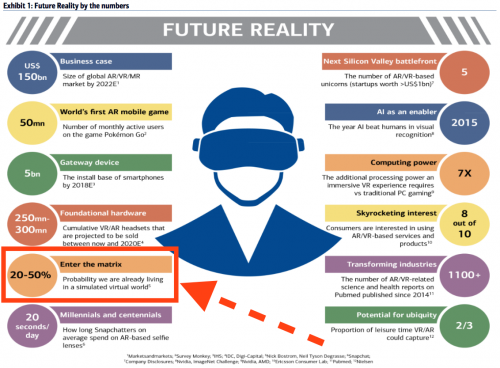 Bank of America Merrill Lynch argues that the world is close to photorealistic 3D simulations where millions of people can participate in simultaneously–think video game technology. It is theoretically possible that with artificial intelligence, virtual reality and computing power, future civilizations could have run a simulation of their ancestors.
Nick Bostrom, Neil deGrasse Tyson, and Elon Musk all support this theory
The analysts based this 20-50 percent probability of a simulated virtual world on Nick Bostrom’s paper, “Are you Living in a Computer Simulation” which argues that at least one of three possible scenarios is true: first, humans are likely to go extinct before a “posthuman” stage; second, it is extremely unlikely for posthumans to run a significant number of simulations of their evolutionary history; third, we are living in a computer simulation.
Bank of America Merrill Lynch also based it on American astrophysicist Neil deGrasse Tyson who thinks the possibility that the universe is a simulation “may be very high.”


Get Your Free Report Today
More recently, during Recode’s Code Conference, Inventor and SpaceX founder Elon Musk, supported the simulation theory and said, “There’s a billion to one chance we’re living in base reality.”
But, as Morpheus says, “Unfortunately, no one can be told what the Matrix is. You have to see it for yourself.”
The note did not state any investment implications are for the Bank of America Merrill Lynch.
Don’t forget to follow us @INN_Technology for real-time news updates!

Silver Price Update: Q2 2021 in Review
When Will Copper Go Up?
Top Stories This Week: What to Buy During Gold’s Dip, Breaking Down Basel III
VIDEO — David Morgan: Tesla Needs Silver, Where Will Elon Musk Get It?