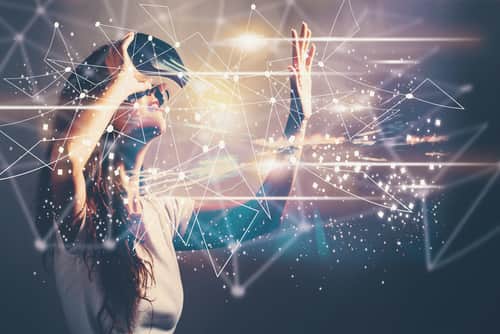 Virtual reality (VR) stocks may be but a whisper in Canada right now, but some say the volume is set to get turned up in a matter of just a few years.

While excitement for VR is admittedly growing slower than some expected, many industry watchers see this technology as the next evolution of entertainment.

Research from Advanced MP Technology highlights that advancements in VR have so far largely come from the video game industry, although the technology is also making a splash in markets such as medicine, business, architecture and manufacturing.

In terms of overall market size, estimates are mixed. Allied Market Research states that worldwide, the VR market is expected to reach US$571.42 billion in 2025.

The research firm projects that the combined augmented reality (AR) and VR markets will grow at a compound annual rate of growth of 63.3 percent until 2025. Growth is expected to be driven by an influx of smartphone and mobile gaming activity.

For its part, Digi-Capital suggests that the AR market could reach between US$85 billion and US$90 billion by 2022, while VR is expected to reach US$10 billion to US$15 billion in revenue by that time.

In a much more cautious estimate, Zion Market Research indicates that the global VR market should reach US$26.89 billion by 2022.

According to International Data Corporation Canada comes in seventh for spending out of the eight countries that IDC looked at. By 2021, the firm expects the Canadian VR sector to reach US$7.1 billion.

So how do you invest in Canadian virtual reality stocks? While there are several privately held Canadian VR companies, only a handful of VR companies are publicly traded.

Here are three key Canadian virtual reality stocks, all with market capitalizations under C$50 million. Data was gathered on November 5, 2019, and all stats were accurate at that time.

Spectra7 Microsystems is a VR stock that makes VR hardware such as head-mounted displays. Its VR-9 DreamWeVR design is an industry first and has an integrated cable, connector and embedded chip product line. Spectra7’s chips allow VR and AR devices to drive 4K UHD and 5K resolutions.

Founded in 2012 by Declan Farrelly, Spectra7’s products integrate unique data and information conduits. These solutions create lightweight and thinner products that can be used by a VR headset, for example. Additionally, the company says that its technology can remove as much as 90 percent of the metallic bulk that is used by VR applications to detect signals.

Two of Victory Square’s holdings are Immersive Tech, a VR solutions company that has worked with clients such as Scotiabank (TSX:BNS) and Intel (NASDAQ:INTC), and Flo Digital, a VR video advertising firm.

YDX Innovation is positioning itself “in the new post-digital reality” that integrates augmented and VR technology with design and narrative. The company’s clients include Coca-Cola (NYSE:KO), Qualcomm (NASDAQ:QCOM), Adidas (OTC Pink:ADDYY,ETR:ADS) and Cisco (NASDAQ:CSCO).

This is an updated version of an article originally published by the Investing News Network in 2017.

Editorial Disclosure: YDX Innovation is a client of the Investing News Network. This article is not paid-for content.

One response to “How to Invest in Canadian Virtual Reality Stocks”