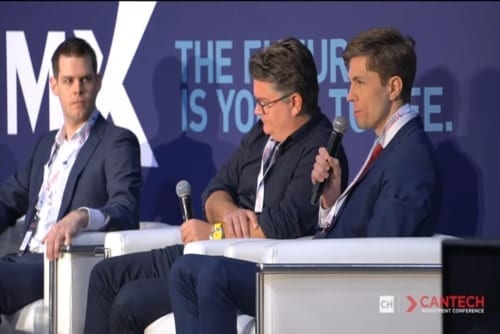 Fund managers shared optimistic views on the tech sector as they made their top picks for 2019 in a panel discussion at the recently held Cantech Investment Conference in Toronto.

Moderator Pardeep Sangha of Haywood Securities kicked off the panel by highlighting how the market “tailed off” towards the end of 2018 as compared to the beginning of the year.

“Last year, the beginning of the year was quite a good market and the end of the year tailed off [with] quite a negative decline in the capital markets,” Sangha said.

Omelchak said that the pullback in the market presents opportunities for investors to pick up stocks at lower prices. “Volatility is a good thing to make money over the longer term,” he said.

“There are some very interesting investment opportunities, especially in December. There have been no bids and a lot of companies have really sold off. So I’m seeing some tremendous opportunities out there, but overall I wouldn’t buy the whole market.”

Omelchak said investors should focus on individual companies instead of looking at the overall space.

For his part, Ballard noted that there is room for tech companies to add value, which is positive for the market. “I think regardless of what happens with the economy, tech companies can add value and help companies operate more efficiently,” he said.

Below the Investing News Network takes a closer look at the companies mentioned by the panelists. All figures mentioned were current as of February 5, 2019.

Burnham’s first pick was C-Com Satellite Systems, a company engaged in the design, development and manufacturing of mobile satellite-based antenna systems for the delivery of broadband internet.

“There’s a revolution right now in satellite technology, it’s called phased array flat panel antennas,” Burnham said. “If they’re able to demonstrate that this technology works — and it’s a big if at this point — but if they are, they will be one of the few companies in the world that’s in a position to deploy this technology.”

Second on his list was WELL Health Technologies, one of the largest providers of primary healthcare facilities in BC. The company seeks to positively change the health sector by leveraging technology to support both patients and doctors.

“If you look at the digital health space, there’s a tremendous opportunity for innovation there,” Burnham said. “I think WELL represents a very interesting platform from which to take advantage of those health trends not only here in Canada, but also in the US over time.”

Ballard’s first pick was a company in the artificial intelligence space, AnalytixInsight. The company is known for its financial analytics platform, CapitalCube, which analyzes market price data and regulatory filings to create insights on companies and exchange-traded funds.

AnalytixInsight holds a 49-percent interest in Marketwall, known for its fintech solutions for financial institutions.

In January, the company announced that its joint venture partner in Marketwall, Intesa Sanpaolo (BIT:ISP), an Italian banking group, is planning to invest 2.8 billion euros over the next three years to fast track its plan to become Italy’s first digital bank.

“The big bank they partnered with spent all the money for development, and now they can take their product and commercialize it across other countries around the world. So they got an option on selling something that a customer has already paid for,” Ballard said.

In January, the company announced the licensing of its TREAT and B Care solutions to the government of Yukon to improve and support mental wellness and substance use services across the territory.

Fisher’s first pick was a visual and data analytics company that has a software-as-a-service model and caters to the real estate and property assessment markets.

In November 2018, the company entered into a non-binding agreement with StableView Asset Management and Clarocity (TSXV:CLY) for the acquisition of Clarocity’s assets. As of January 23, StableView held 31.7 percent of Clarocity, a company that provides real estate valuation solutions.

“So you’ve got management who has already built billion-dollar companies before, [and] they’ve done it through acquisitions and tying companies together,” Fisher said. “Post acquisition, the company is incredibly cheap.”

AcuityAds, a technology company that provides marketers with a solution for digital advertising across all formats, was Fisher’s second pick.

In February, the company announced that it had signed several multi-million dollar orders in January, with its clients including new and the existing firms across diversified industries, including the pharmaceutical and banking spaces.

“Here’s a company that took it in the teeth along with everybody else in their industry, and they’ve been able to turn it around,” Fisher said. “They’re dirt cheap.”

Photon Control, a company that develops and supplies optical measurement technologies to the global semiconductor industry, was Omelchak’s first pick.

“I’m very bullish on long-term demand for semiconductor equipment, and what these guys do is they provide the temperature-measuring solutions [used] during the very complex manufacturing [process] for the chips,” Omelchak said.

The company announced in January that it has entered into a distribution agreement with Japan Laser, a leading distributor of lasers and other equipment in Japan.

In the last week of January, the company was awarded an IT services contract by General Dynamics Mission Systems as part a partnership to deliver Land Command, Control, Communications, Computers, Intelligence, Surveillance and Reconnaissance (C4ISR) systems.

Securities Disclosure: I, Bala Yogesh, hold no direct investment interest in any company mentioned in this article