Palladium prices gained in 2017 due to insufficient supply and growing demand from the auto sector. Read on for the 2018 palladium outlook.

At the end of 2016, most analysts agreed that 2017 would be a year of gains for palladium. An ongoing supply deficit and growing auto sector demand were seen boosting prices. Palladium has risen 51 percent in 2017, according to the Scotiabank Commodity Price Index.
The metal began the year at about $685 per ounce, breached the $800 mark by March 23 and was up to $830 by April 28.
In May, the price gap between platinum and palladium was about $100, and Ross Strachan of Thomson Reuters said, “it is more a case of when, not if, the palladium price will exceed platinum for the first time since 2001.”
The price difference between the sister metals narrowed to about $39.50 the following month. By June 22, palladium was trading at $889 and platinum was changing hands at $928.50 per ounce.


ACCESS REPORT
Finally, on September 27, palladium reached price parity with platinum for the first time since 2001. A day later, palladium was trading at $936.50 — it had surpassed platinum, which was trading at $924.
Palladium hit another milestone on October 16, climbing past $1,000 for the first time since 2001. Palladium is one of 2017’s best-performing commodities, having advanced about 48 percent year-to-date. That’s about 10 times the rise seen by platinum.
As of mid-December, palladium was still above the $1,000 level, and was changing hands at $1,104.30 as of 2:30 p.m. PST on Tuesday (December 12). 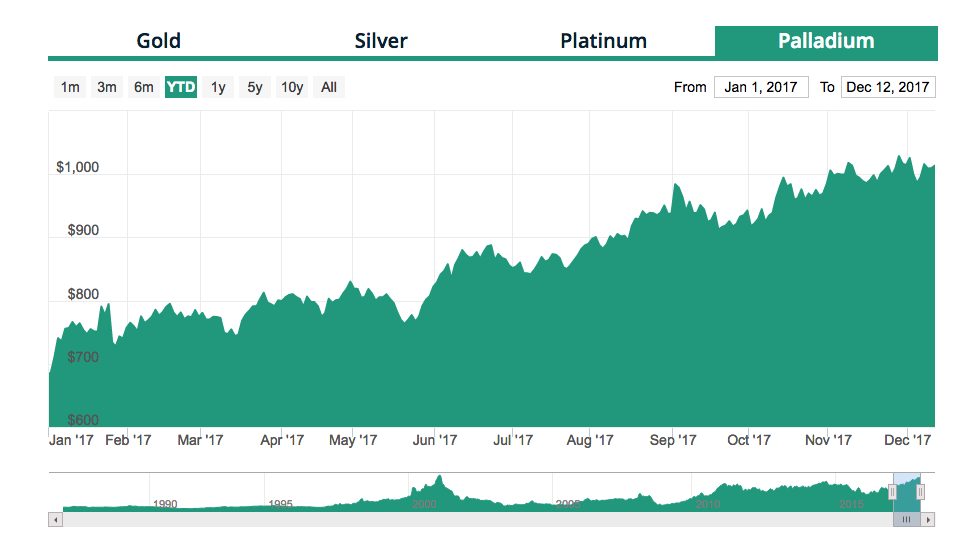 Palladium prices from January 2017 to December 2017. Chart via APMEX.
The question now is whether current prices are sustainable. Analysts polled recently by FocusEconomics see palladium prices averaging $920 in Q4 2018, with the lowest forecast provided being $714 and the highest being $1,050. In other words, price stability looks to be in the cards next year.

As mentioned, increased demand from the auto sector was one factor that impacted palladium prices in 2017. Speaking during the fall, Chris Blasi of precious metals dealer Neptune Global Holdings said, “palladium is actually taking some market share away from platinum in the world of catalytic converters. So that’s what we see as driving the palladium price. But … no investor saw that coming.”
Palladium is primarily used in gasoline-powered vehicle autocatalysts, while platinum is used mainly in autocatalysts for diesel-powered vehicles. According to FocusEconomics, “gasoline-powered engines are popular in the sizable car markets of the US and China, boding well for demand.”
The 2015 Volkswagen (ETR:VOW3) emissions-rigging scandal involving diesel-powered vehicles has also led drivers in Europe to gravitate towards gasoline-powered vehicles.
Johann Wiebe, lead analyst at Thomson Reuters’ GFMS Supply Chain & Commodities Research division, said, “diesel vehicles will still be around for awhile, but their share in Europe, the largest market, is estimated to decline from around 45 percent at present to as little as 35 percent in 2025.”
Meanwhile, George Gero, managing director of RBC Wealth Management, recently told Reuters that palladium, “cannot be reclaimed as easily or as often from junked automobiles as platinum.” He added that there is higher demand for palladium in the US and in the Caribbean as consumers replace vehicles damaged by hurricanes earlier this year.
US automakers reported that vehicle sales rose 1.3 percent in November compared to the the previous year. Similarly, China, the world’s largest auto market, saw a 2-percent year-on-year increase in vehicle sales in October. Overall Chinese retail auto sales between January and November grew 1.6 percent, to 21.4 million units. According to the China Passenger Car Association, sales are expected to gain by 4 percent in 2018, double the pace estimated for 2017, as more customers enter the market.
That said, Reuters notes that TD Securities, Citi Research and ABN Amro (AMS:ABN) predict that automakers may start to substitute palladium for platinum in gasoline engines in 2018.

In May, Johnson Matthey (LSE:JMAT) forecast that global auto demand for palladium would exceed 8 million ounces for the first time in 2017, widening the supply deficit to 792,000 ounces.
“There is potential for further profit-taking in the investment sector, but the rate of liquidation is predicted to slow following two years of heavy disinvestment. With firm prospects for industrial demand, especially from Chinese bulk chemicals producers, we predict that total gross demand will rise by more than 7 percent to exceed 10 million oz,” the firm said.
The palladium market has been characterized by physical deficits since 2012. Aboveground stocks have fallen from 18 million ounces at the end of 2010 to Metals Focus’ forecast of 14 million ounces by the end of 2017. In November, HSBC said the palladium deficit is forecast to reach 680,000 ounces in 2017 and will increase to 1,151,000 ounces in 2018.
Norilsk Nickel (MCX:GMKN) has said it plans to increase its purchases of palladium from Russian Central bank reserves due to concerns about a shortage. Markus Meurer, the company’s head of global sales and marketing, told Reuters in November that Norilsk’s 2017 purchases will increase to about 600,000 ounces compared to 160,764 ounces in 2016 to “make the metal available to our key industrial users.”

In a recent presentation, Norilsk, which is the world’s top palladium producer, said it is completing a feasibility study for its South Cluster project, which could add more supply to the market.
According to the company, South Cluster has the potential to become one of the top five producers of platinum-group metals in six to seven years’ time based on its reserve base. A final investment decision on South Cluster is expected in H1 2018.
In a market report, Johnson Matthey noted that Sibanye Gold’s (NYSE:SBGL,JSE:SGL) acquisition of Stillwater Mining “became effective in early May 2017, making the company one of the world’s top four primary palladium producers on an attributable basis.”
The firm has since changed its name to Sibanye-Stillwater, and it announced first production from the Blitz project, a brownfields extension of the existing Stillwater mine, in October. First production at Blitz was “more than three months ahead of schedule,” according to company CEO Neal Froneman. A ramp up to full production is not expected until late 2021.
Don’t forget to follow us @INN_Resource for real-time news updates!
Securities Disclosure: I, Melissa Shaw, hold no direct investment interest in any company mentioned in this article.
Editorial Disclosure: The Investing News Network does not guarantee the accuracy or thoroughness of the information reported in the interviews it conducts. The opinions expressed in these interviews do not reflect the opinions of the Investing News Network and do not constitute investment advice. All readers are encouraged to perform their own due diligence.